This picture was posted Tuesday of two men holding a pretty big shark—and it happened right in our area... in Atlantic Beach.

Action News Jax reporter Courtney Cole spoke to the woman who saw it all and shares the message from the two men in the photo.
Candy Keane said she was out with her family on Atlantic Beach on Tuesday for their usual evening walk.
"But then we saw something flopping around in the water,” said Keane.
That’s when they went over to check it out. 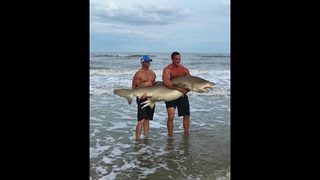 "My husband was like, 'I think that guy's got a shark!' "exclaimed Keane.

Keane told Cole the shark wasn’t small by any means.
In fact, she said it was about 6 feet long.
"It's funny, because I'm always out here looking for sharks' teeth--and then there's an entire shark on the beach!” Keane said.
Keane told Cole she saw the men fishing when they reeled the catch in.
“A friend of mine actually took the picture, and all I did was post it. I was like 'Who's got a picture? Take a picture, send it to me!'” said Keane.
Cole spoke to one of the men in the photo, Robert Arnemann.
He wanted  everyone to know the shark was not harmed and was released back into the water.
Arnemann also told Cole they only fish for fun and don't want to harm nature.
"They did not really mess around with it too long. It was a quick photo and they put it back. I think they made a really good effort to get it back in the water,” said Keane.

Such an awesome and inspirational story!! And @CourtneyANJax has all the details from a woman who witnessed the daring release on CBS47 at 5: https://t.co/Wlm01JFTYc pic.twitter.com/1h8ADd1Sk2