November is the last month of the “official” Atlantic hurricane season but the already record breaking season marches on with what looks like an active end to the season (if it doesn’t continue into Dec.!). Eta became an intense Cat. 4 hurricane Mon., Nov. 2nd & seems destined to be “around” for a number of days along with a possibly 2nd system. 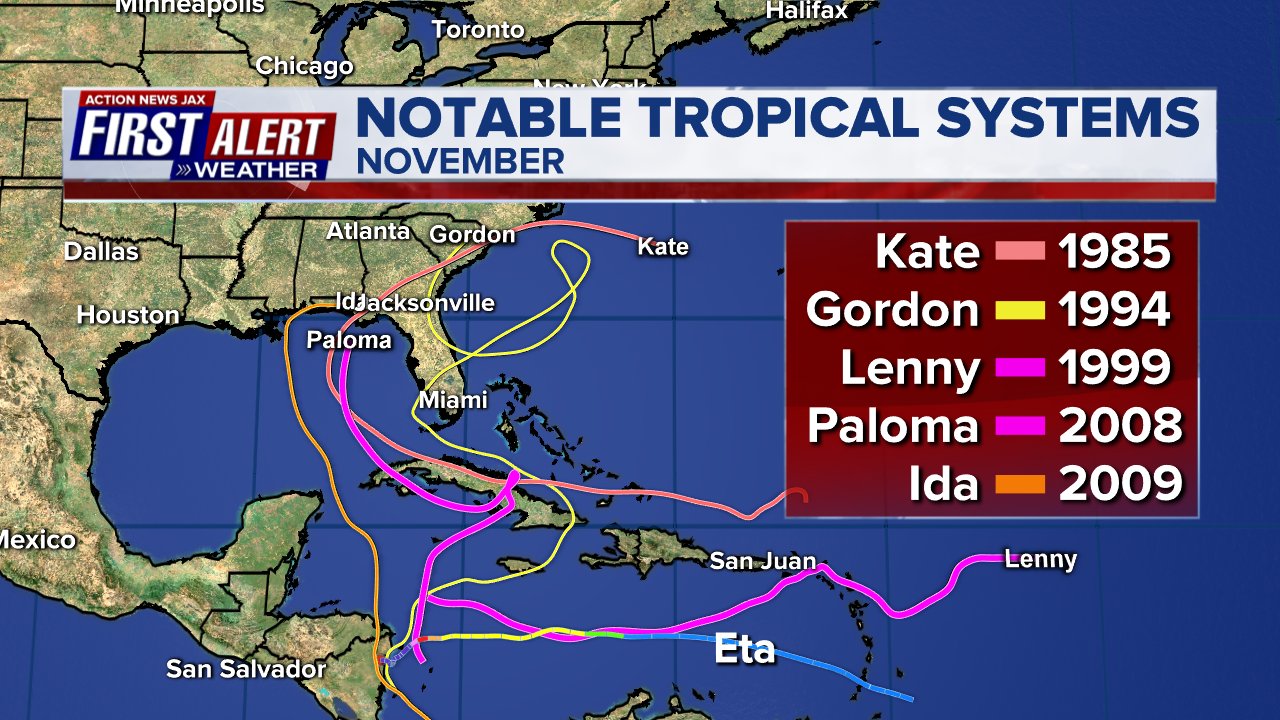 As we head into Nov., La Nina typically leads to a mild end to autumn & the NOAA 30-day outlook heavily leans that way. Much of the U.S. is also forecast to be drier than avg. including Fl./Ga. *But* one big caveat: potential tropical activity that could lead to a wet spell near the Gulf Coast & Southeast U.S., Jacksonville/NE Fl./SE Ga. included. 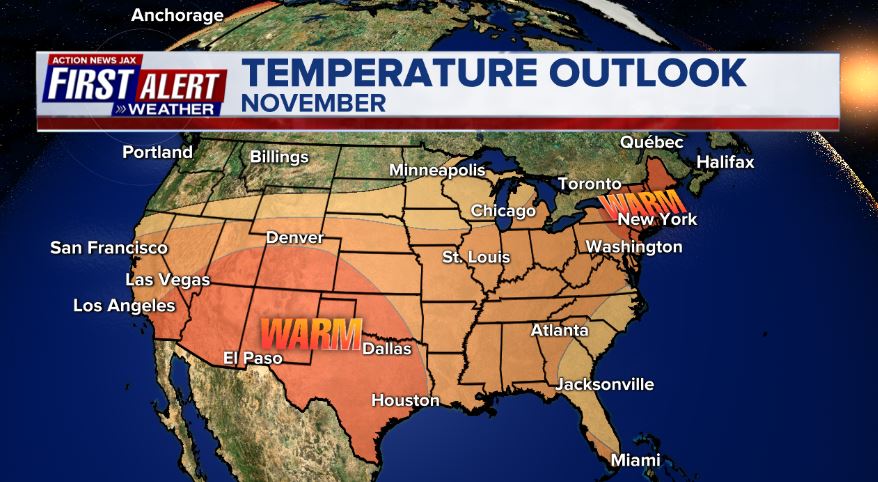 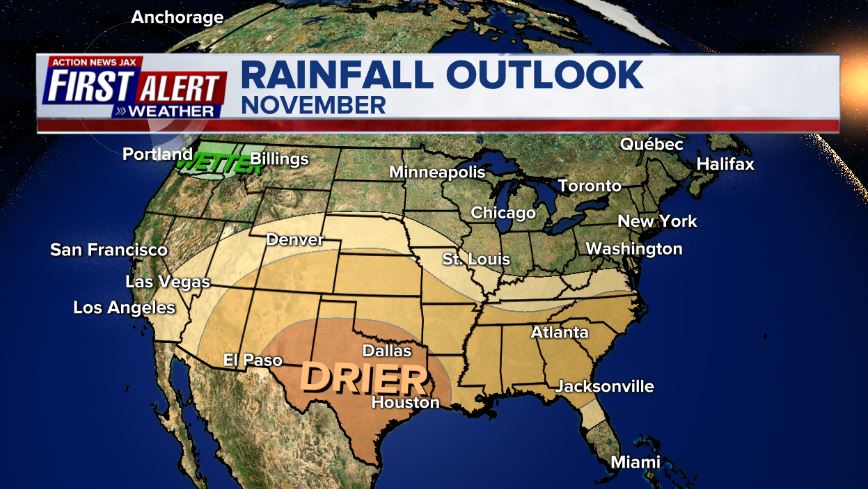 And as we head deeper into autumn & then winter... a reminder from the St. Johns River Management District:

Starting Sunday, Nov. 1, homeowners and businesses across the 18 counties of the St. Johns River Water Management District should reset their automatic sprinkler systems to water no more than once a week. When “falling back” — turning your clocks back an hour — it’s also time to change your irrigation system timer to water your lawn only on your designated watering day.

“Research shows that, in Florida’s cooler months, grass and plants don’t need as much water to be healthy — you can save water and money and still have a beautiful lawn,” said St. Johns River Water Management District Executive Director Dr. Ann Shortelle. “When you turn back your clocks Saturday night, be sure to also reset your sprinkler timers to water only on the designated day for your address. Keep in mind that you may not need supplemental irrigation at all if it has rained.”

Public water supply is the largest category of water use in the District’s 18-county region — about 565.5 million gallons of water a day. Most of this water is for residential water use, and many people don’t realize that more than half of total residential water use is used outdoors if the home has an automatic irrigation system. Efficient irrigation systems that are scheduled correctly can save up to half of that outdoor water use.

Because lawns need significantly less water in Florida’s winter months, watering restrictions are in place to ensure that water used for irrigation is used efficiently. During Eastern Standard Time (early November through mid-March), landscape irrigation is limited to no more than one day a week on the following schedule:

The District’s 2020-2021 Water Less campaign aims to raise awareness about water conservation and to communicate easy ways to integrate outdoor water conservation into Floridians' daily lives. The year-round campaign features seasonal messages, starting with “Fall Back” in November to encourage no more than once-a-week watering as temperatures begin cooling.

More information and water-saving tips can be found at www.WaterLessFlorida.com. To learn how your neighbors across the District are saving water, visit our Water Less Heroes series here.

Nov. 12 (morning): Peak of the weak Northern Taurid meteor shower. No interference from moonlight. 10-15 per hour.

Nov. 12 (dawn): The waning crescent Moon, Venus, and Spica form a curving line in the east; Mercury is at lower left.

Nov. 13 (dawn): The thinnest sliver of the Moon, Venus, Spica, and Mercury are arranged in a trapezoid.

Nov. 19 (dusk): The Moon has leapfrogged past Jupiter and Saturn, and now forms a triangle with them.

Nov. 25 (evening): The waxing gibbous Moon and Mars are less than 5° apart high in the south-southwest.

Nov. 29 (dawn): The almost-full Moon gleaming between the Hyades and the Pleiades form a pretty tableau in Taurus.

Nov. 30 (morning): A penumbral lunar eclipse is visible across nearly all of North America. Look for dusky shading on the Moon’s upper half near 4:43 a.m. EST (1:43 a.m. PST), the time of mid-eclipse.

Arctic sea ice has finally started to rebound after its Sept. min. & after very little growth in Oct. which is extremely unusual. “Severe Weather Europe” has a very detailed discussion * here *. For much of this year, Arctic sea ice coverage has rivaled that of the record low year of 2012 & is now even a little lower than the min. late in autumn, 2012. 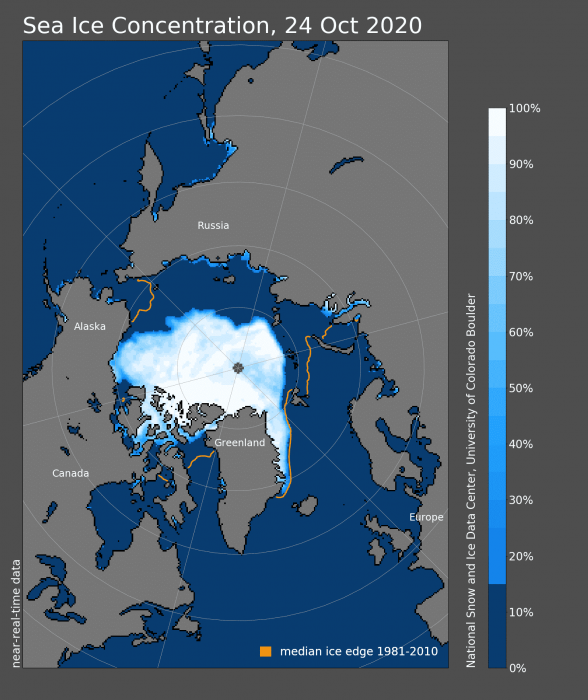 The Antarctic ozone hole reached its maximum in mid September & will likely persist for another month or so. More: * NOAA * .... * NASA *. It is believed the restriction of ozone-depleting chemicals has generally improved the overall condition (size) of the ozone hole. Summary of ozone & its importance by NASA:

Ozone is composed of three oxygen atoms and is highly reactive with other chemicals. In the stratosphere, roughly 7 to 25 miles above Earth’s surface, the ozone layer acts like sunscreen, shielding the planet from ultraviolet radiation that can cause skin cancer and cataracts, suppress immune systems and damage plants and sensitive plankton at the base of the global food chain. By contrast, ozone that forms closer to Earth’s surface through photochemical reactions between the sun and pollution from vehicle emissions and other sources, forms harmful smog in the lower atmosphere.

The Antarctic ozone hole forms during the Southern Hemisphere’s late winter as the returning Sun’s rays start ozone-depleting reactions. Cold winter temperatures persisting into the spring enable the ozone depletion process, which is why the “hole” forms over Antarctica. These reactions involve chemically active forms of chlorine and bromine derived from man-made compounds. The chemistry that leads to their formation involves chemical reactions that occur on the surfaces of cloud particles that form in cold stratospheric layers, leading ultimately to runaway reactions that destroy ozone molecules. In warmer temperatures fewer polar stratospheric clouds form and they don’t persist as long, limiting the ozone-depletion process.