Coming off of a moderate La Nina (cooling of the equatorial Pacific) late last year into this spring, NOAA has issued a La Nina WATCH for this fall into the winter. Back-to-back La Nina’s have occurred in the past & are more common than back-to-back El Nino’s (warming of the equatorial Pacific). For Jacksonville/NE Fl./SE Ga., a La Nina generally results in big temp. swings during the winter followed by a dry spring. Globally - a more active Atlantic hurricane season often occurs.

“The strength of the coupling between the winds and upper ocean matters because it not only strengthens El Niño and La Niña, but it also sets the wheels in motion for the ultimate demise of each event. The strong coupling between ocean and atmosphere and the more eastward wind stress anomalies during El Niño contributes to a robust poleward discharge of equatorial Pacific upper-ocean heat, typically by early spring, that ends the El Niño event and sets the stage for the next La Niña. The weaker coupling and more westward wind stress anomalies during La Niña means that the corresponding “recharge” of heat is also weaker, and so the ocean is not as primed for a transition to El Niño. Instead, if we experience the right sequence of tropical weather, a second winter of La Niña may return instead.” 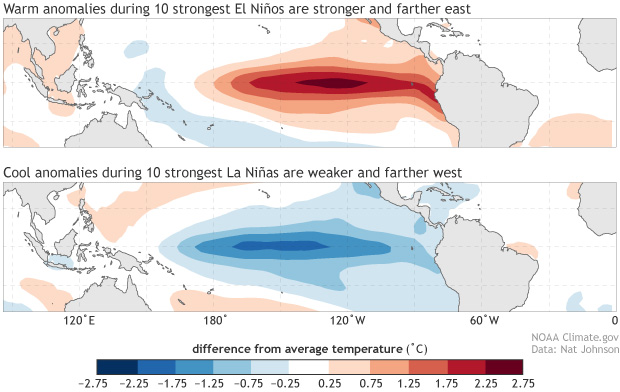 Current sea surface anomalies over the equatorial Pacific show neutral conditions (though a little warmer than avg. closer to S. America). Water at greater depths is generally near or a bit below avg.

Model forecasts favor a return to La Nina conditions from the fall through especially winter:

The first 6 months of the “new” year are behind (flying by, right??). So it’s time for a look back - weathewise - on the first half of the year. We’ll start with billion dollar diasters. So far, the year has been one of the costliest on record through June centered on Texas (severe Feb. cold wave, large hail & flooding). The western drought is ongoing. And - as you can see in the second image below, 2021 is setting up to be a record your of losses if the trend continues. In fact - in most years - a spike occurs late in the summer into fall due to the peak of the hurricane season + the peak of the wildfire season for the Western U.S. 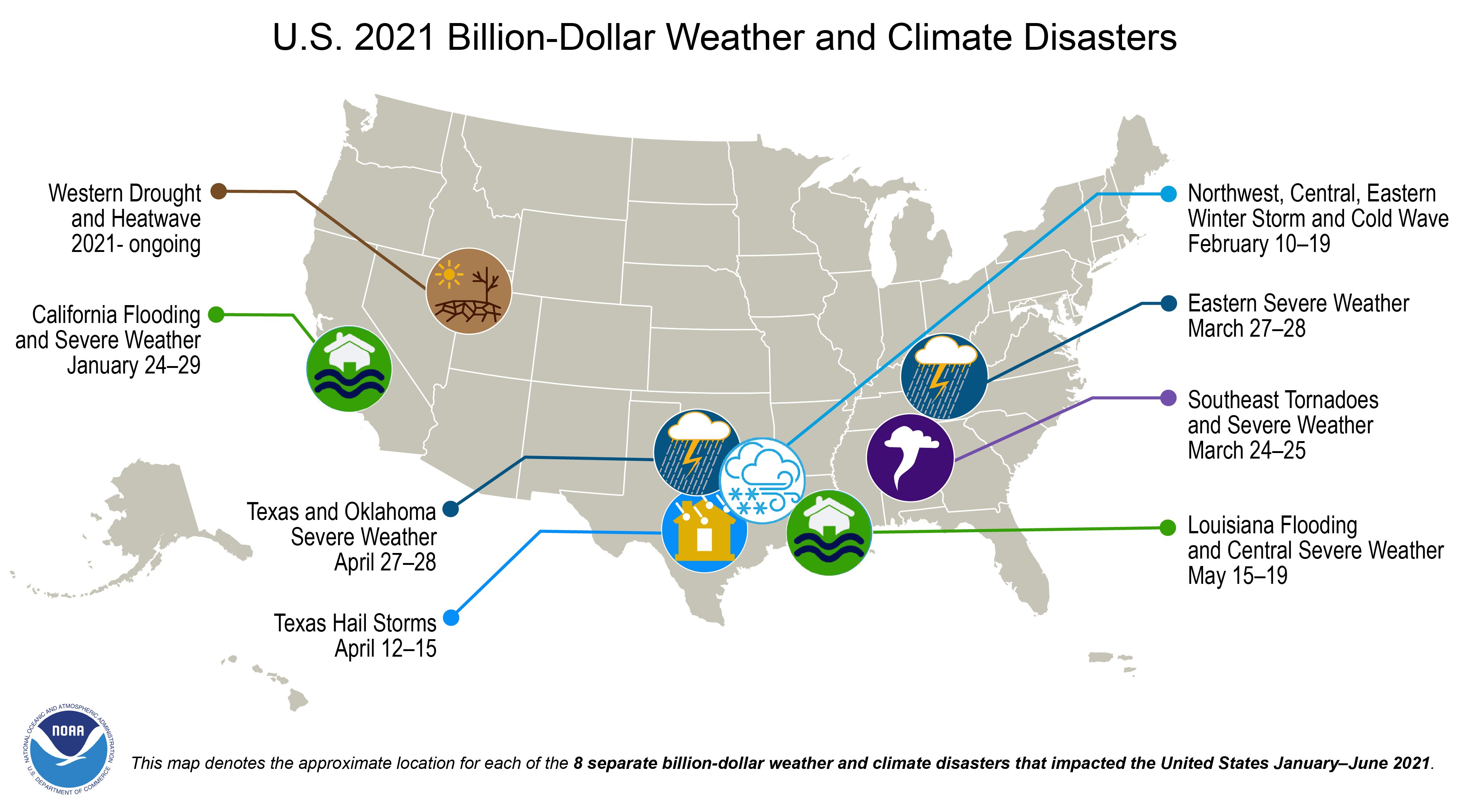 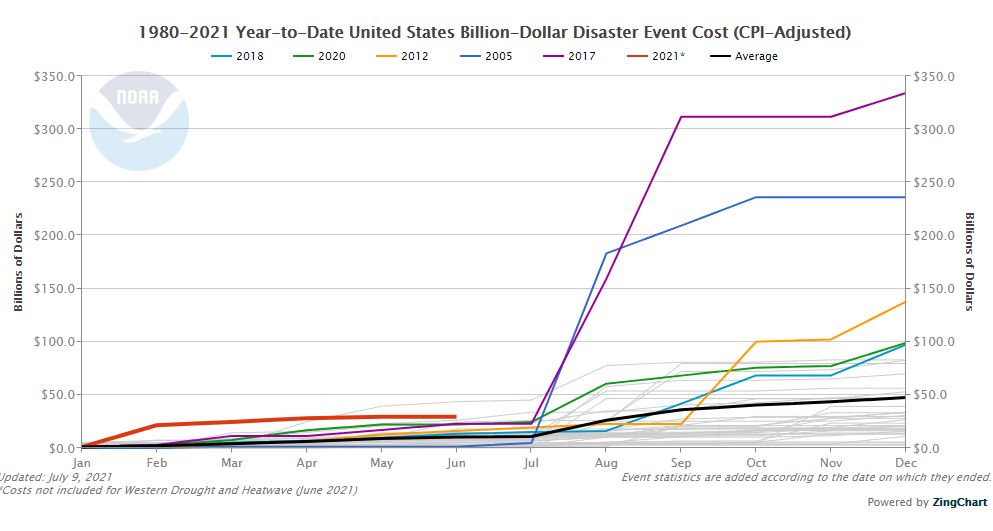 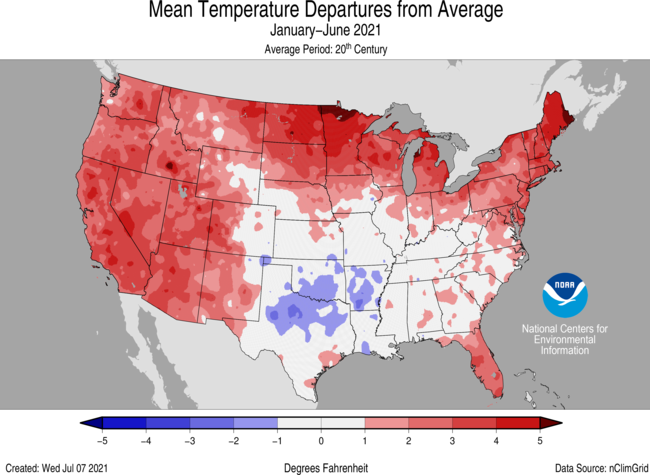 Precipitiation was only 0.67″ below avg. for the Lower 48... Jacksonville was exactly 3″ above avg. thanks largely to a wet Feb. & June. 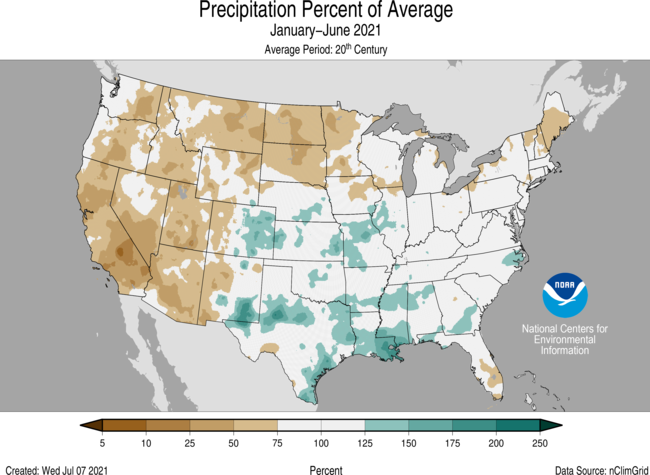 We’ve had some great views of clouds recently given all the storminess. The photo below is from Dana Brehm, Neptune Beach... the 2nd one from Kyle Hicks... & is of iridescent pileus. Pretty cool & gorgeous! Pileus clouds are sometimes called “cap clouds” as the pileus appear to be over the top of a much bigger cloud as if wearing a cap. In the instance below, you can see a rainbow color thanks to the ice crystals in the high thin (pileus) cloud that reflect & refract sunlight. This particular pileus cloud was formed by the upper level winds suddenly being pushed up & over a cumulonimbus cloud causing condensation (the pileus cloud) right above the thunderhead. 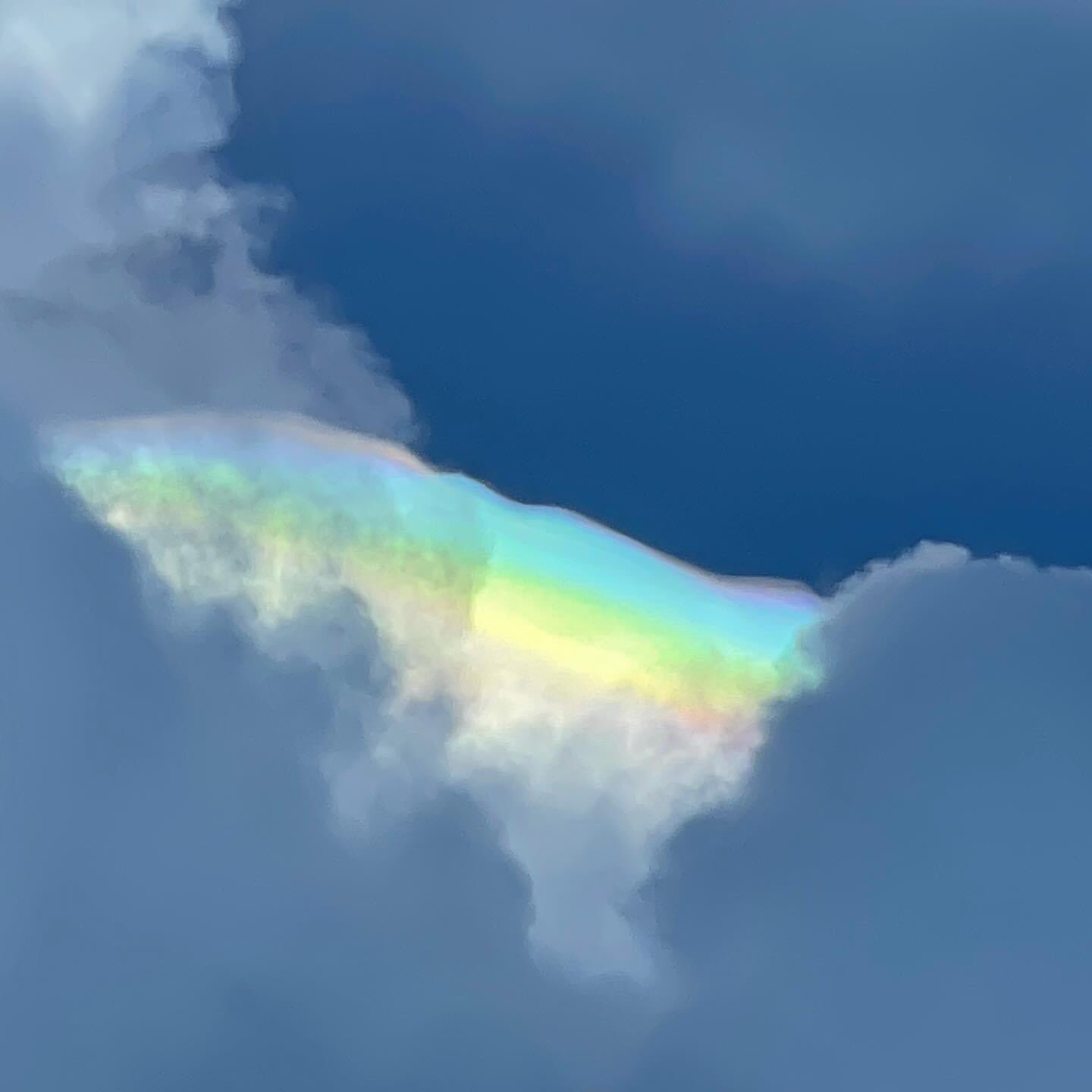