Jacksonville, Fl. — NOAA has officially pulled the trigger on a La Nina Watch - meaning conditions over the equatorial Pacific look to *possibly* be trending toward a La Nina which is a cooling of the ocean water. La Nina hurricane seasons historically are active which is one of the reasons for most seasonal forecasts indicating above average tropical cyclones (tropical storms &/or hurricanes). The map below shows the blue - cooler than avg. - ocean water off the coast of S. America extending as far west as 140 degrees.

Model predictions largely show varying degrees of a La Nina in the coming months with a potential peak during the winter.

While models indicate the potential for a La Nina, probabilities are generally “only” about 50-55% right now. 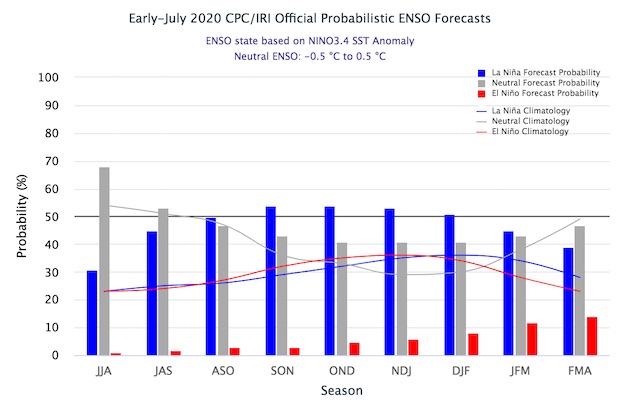 La Nina hurricane seasons are typically more active in the Atlantic Basin vs. the Pacific Basin thanks to weaker wind shear & more instability. Find out what’s going on in the tropics: “Talking the Tropics With Mike”.

Looking for comet Neowise? The comet was discovered by a satellite in late March, & the view through June into early July did not disappoint. The comet is now moving away from the sun which will make Neowise dimmer even though it’s making its closest approach to earth through July 22 (& not again for 6,000+ years!). A handy website will calculate when & where you can see Neowise - click * here *. Visible low in the NE sky 1-2 hours before sunrise, local resident Scott Dumaop captured great images from Jacksonville Beach last week: 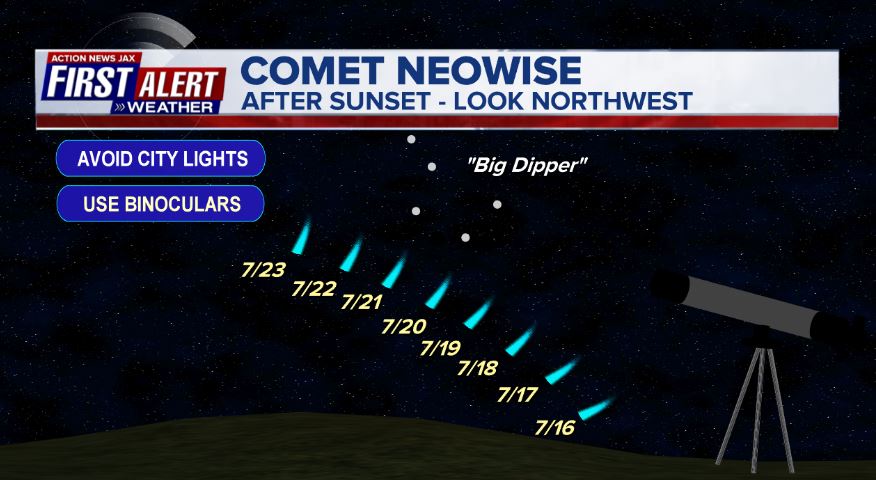 An unexpected celestial newcomer, after falling toward the Sun for more than 3,000 years, is making a lovely appearance in our skies right now. You can see it for yourself very low in the northeast as dawn begins to brighten — and in the evening after sunset beginning July 14th — but you’ll need to know what to look for, and binoculars will help.

Comet NEOWISE is named for the NASA infrared space telescope that discovered it on March 27th. Officially designated C/2020 F3, it passed just 27.4 million miles from the Sun (inside the orbit of Mercury) on July 3rd and has emerged into view low over the horizon in the early dawn.

Find the Comet: July 14th and After 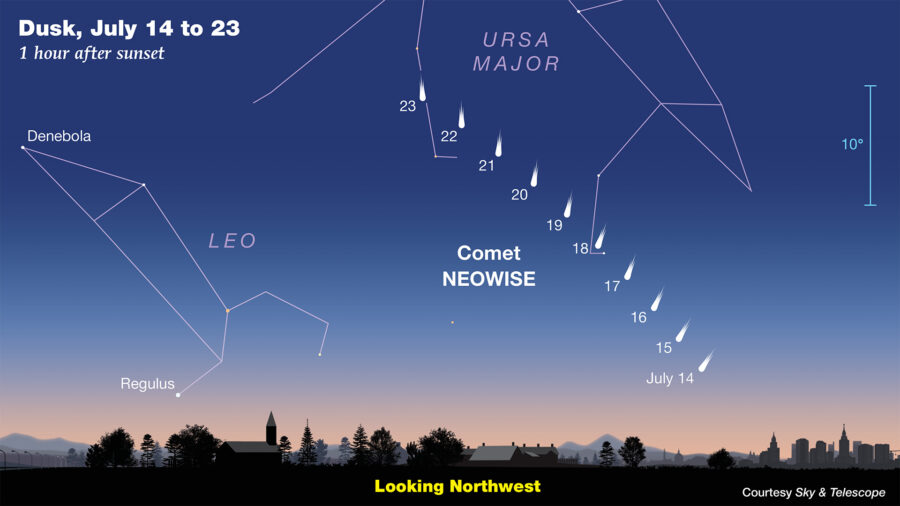 From July 14th onward, the comet’s motion will have shifted its position to the evening sky. By the time it emerges into the evening sky, Comet NEOWISE might no longer be visible by eye, but the chance of glimpsing it improves if you can find a location that’s free of light pollution.

Start looking about 1 hour after sunset, when you’ll find it just over the northwest horizon as the last of twilight fades into darkness. Look about three fists below the “bowl” of the Big Dipper, which is hanging by its handle high above, and perhaps a little to right.

Every evening thereafter NEOWISE will be getting dimmer, but it will also be getting higher up as twilight ends. On the evening of the 23rd, when Comet NEOWISE is its closest to Earth, locate it by first noting the two stars at the bottom of the Big Dipper’s bowl. Then draw an imaginary line through them and toward lower left to a point in the sky a little more than one fist away.

Want to try snapping pictures? Bring a tripod and a camera that can take time exposures several seconds long. Even the best phone cameras will give mediocre results. What you really want is a DSLR camera with a telephoto lens.

The “rest” of the night skies:

July 11 (dawn): The waning gibbous Moon and Mars are 6° apart high in the southeast.

July 14 (night): Jupiter reaches opposition, rising at sunset in the east, remaining up all night, and setting at sunrise.

July 17 (dawn): The waning crescent Moon, Venus, and Aldebaran make an arc 6° long in the east.

July 20 (night): Saturn reaches opposition, rising at sunset in the east, remaining up all night, and setting at sunrise.

July 22 (dusk): The thin waxing crescent Moon is 3° above Regulus low in the western twilight.

July 29 (evening): The waxing gibbous Moon is 5° above the red supergiant star Antares.

Aug. 1 (dusk): The waxing gibbous Moon, Jupiter, and Saturn form a triangle above the southeastern horizon.

Aug. 9 (morning): The waning gibbous Moon and Mars are only 1° apart in the hours before dawn. 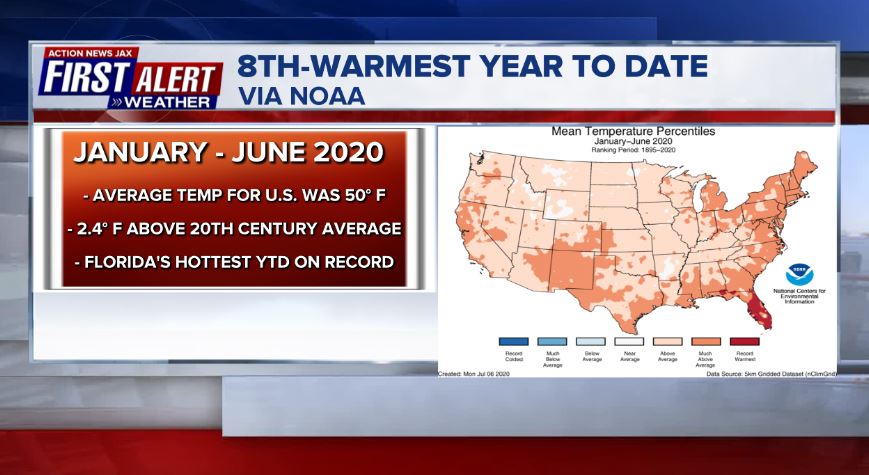 From Jan. through June, there have been 10 disasters with losses greater than 1 billion dollars! The avg. for a whole year since 1980 is 6. 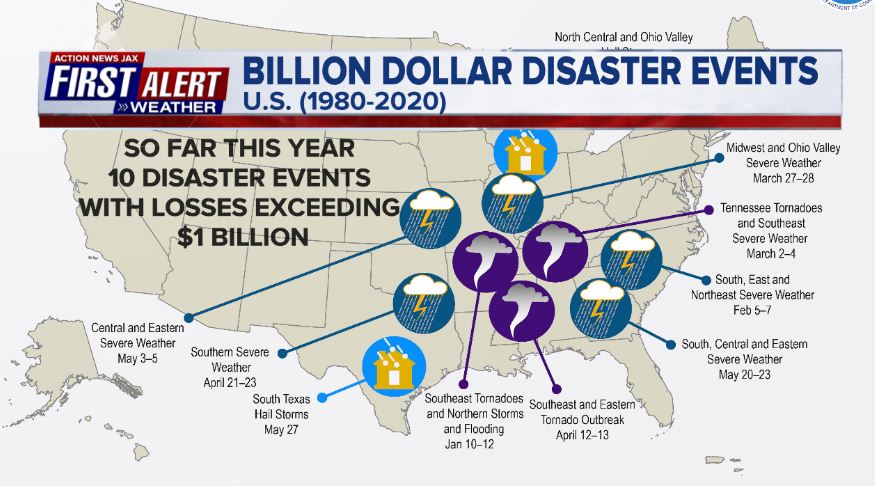 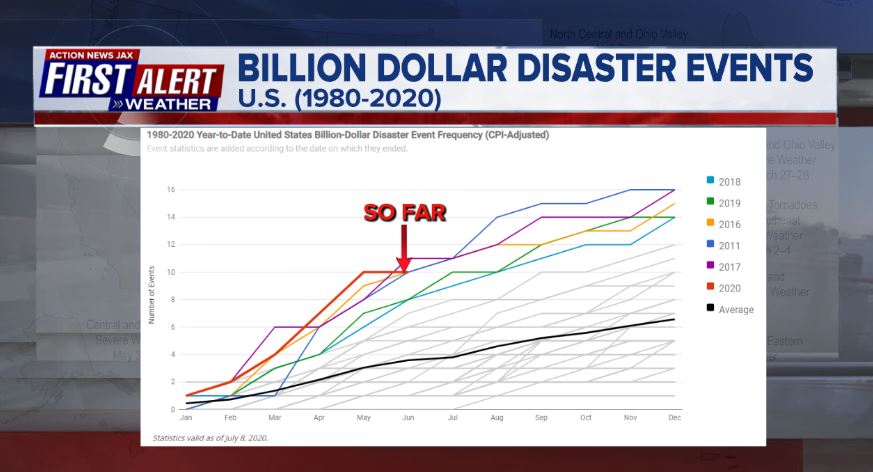