Jacksonville, FL — Sunday-Monday, May 15-16, all of the U.S. will experience a full lunar eclipse (the earth lines up just right between the sun & the moon casting a shadow on the moon). You can view this safely with the naked eye (as opposed to a solar eclipse) & the moon may appear somewhat rust colored. Totality for Jacksonville will be from 11:29pm to 12:53am. There will be another lunar eclipse Nov. 7-8. More info. from Sky & Telescope * here *. More spectacular solar eclipses are on the horizon (pun intended) - October 14, 2023 [annular] and April 8, 2024. 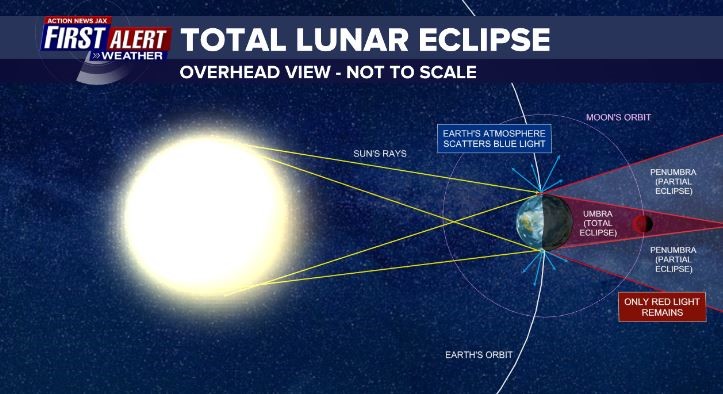 Image below from Sky & Telescope: 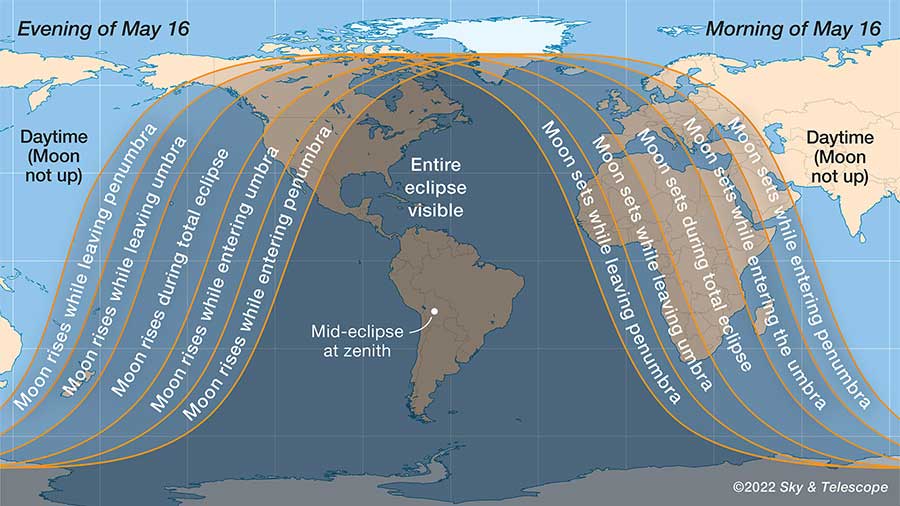 Courtesy Sky & Telescope, night skies through May into early June:

May 15-16 (night): Much of North America and all of South America witnesses a total eclipse of the Moon. This is the first such eclipse visible from all the contiguous U.S. since January 2018.

May 22 (morning): Early risers will be greeted by the last-quarter Moon 5° below Saturn in the southeast.

May 24 (morning): Jupiter and Mars rise together in the east; the waning crescent Moon is 7° to the right of the pair.

May 25 (dawn): Jupiter, Mars, and the Moon form a compact group in the east-southeast; Venus rises to their lower left.

May 29 (dawn): A mere ½° separates Jupiter and Mars above the east-southeastern horizon.

June 2 (dusk): The thin waxing crescent Moon, Castor, and Pollux form a triangle in the west-northwest after sunset.

June 4 (dawn): Head out before sunrise to see all five naked-eye planets stretching in a long line from very low in the east to higher in the south. Catching Mercury will be a challenge, though.

The Jaguars football schedule has been released! The average high temp. for each game (home & away):

Jags road games for the 2022-'23 season w/ the avg. high temp. for each city (of course, Broncos considered a "home" game but in London) @actionnewsjax @wokvnews #FirstAlertWx pic.twitter.com/5fhS1yLT15

As the hurricane season approaches, a pretty cool & handy new software program from UCF & other universities. I’ve tested a few local addresses, & the program seemed accurate & helpful. It’s not the only tool one should use for deciding risk, but it’s definitely helpful.

ORLANDO, May 9, 2022 – In some areas of the Southeast, such as Florida, the housing market is booming, but with hurricanes and other natural disasters posing annual threats, the true cost of owning a home in the region may be largely unknown.

That’s why the University of Central Florida and a team of researchers from across the country have just released a new online tool that can help people determine how ready their home, or future home, is for the next big storm.

The tool, called HazardAware, is now live, just ahead of the Atlantic hurricane season.

The easy-to-use tool allows users to plug in an address and instantly receive the property’s HazardReady score. The score shows just how resilient, or disaster-ready, a home is, and projects how much hazards, such as winds and flooding, could cost a homeowner each year.

HazardAware can provide reports for 13.3 million addresses in 196 counties along the Gulf of Mexico — including all of Florida, and parts of Mississippi, Alabama, Louisiana and Texas. This is a region that is historically impacted by hurricanes and other large hydrometeorological hazards each year.

With continued funding, HazardAware could also be expanded to cover the entire U.S. and other disasters such as wildfires and earthquakes.

Users can choose to receive an emailed custom home report for their address, and they will also receive a renter and homebuyer checklist that can help ensure they ask the right questions next time they are in the market for a home.

The tool is part of a larger $3.4 million, multi-institution UCF-led project funded by the National Academies of Sciences, Engineering, and Medicine’s Gulf Research Program.

“When people buy houses, they generally think about location, pricing, crime, walkability and things like that,” says Christopher Emrich, principal investigator of the research and a Boardman Endowed Associate Professor of Environmental Science and Public Administration at UCF. “But rarely do people think about how much hazards will cost. By going to HazardAware, people can compare houses and get more information they can use to make crucial decisions and smart choices about where they live.”

For example, the score includes work by international expert and UCF coastal risk engineer Thomas Wahl. Using his models of changes in future coastal flood risk, the tool produces an estimate of when a property will see coastal flooding or when flooding potential will double for properties already in coastal flood zones.

“We want to democratize this very scarce and very difficult to find hazard disaster and impact information,” says Emrich, who also co-leads UCF’s National Center for Integrated Coastal Research and Sustainable Coastal Systems research cluster. “Some of this data would require a Ph.D. and 40 hours of investment to make sense of, but we want to put it into everyone’s hands. HazardAware has built a team capable of pulling together this type of ‘fugitive’ or hard-to-find information for homeowners and renters in the coastal zone.”

For next steps, the researchers want to provide customized mitigation information through the tool for each home highlighting what can be done to reduce future hazard loss. They also want to implement an option where users can improve their home’s resiliency score by inputting upgrades they’ve made, such as installing stormproof windows or a certified roof.

“I think the impetus for all this is to help people stay in their homes after a disaster by mitigating the threats hazards pose,” Emrich says. “If we can protect people’s homes, and people don’t have to leave, then they don’t suffer mental distress as deeply, and they don’t lose jobs as frequently. We can avoid a bunch of losses just by keeping people in their homes.”