NASA and SpaceX are “Psyched” to start a new mission together - chasing asteroids! You heard that right. Typically you hear about storm chasers and parents chasing their kids...but we’re actually headed to space to chase asteroids. The mission itself - called “Psyche” - is slated to launch in 2022 on a Falcon Heavy rocket. The mission centers around an asteroid called - you guessed it - “Psyche." 16 Psyche is located between Mars and Jupiter and orbits the sun. Psyche is made of a lot of metal, but still considered unique. According to NASA, it appears to be mostly made of nickel-iron, which is considered to be a building block of the solar system.

The asteroid "16 Psyche" made of metal could show scientists what makes up Earth. (Supplied: Arizona State University)

Falcon Heavy will launch @NASAPsyche! The mission, for which @NASA requires the highest level of launch vehicle reliability, will study a metal asteroid between Mars and Jupiter to help humanity better understand the formation of our solar system’s planets https://t.co/mvrgx6dvaW pic.twitter.com/FqMaRKscQ4

Venus made her presence known at the end of February...and will again at the end of March. The bright planet made a move very close to the moon (at least from our point of view) and provided us a chance at some awesome photos:

The moon will pass close to Venus again at the end of March. The Pleiades get in on the act too: 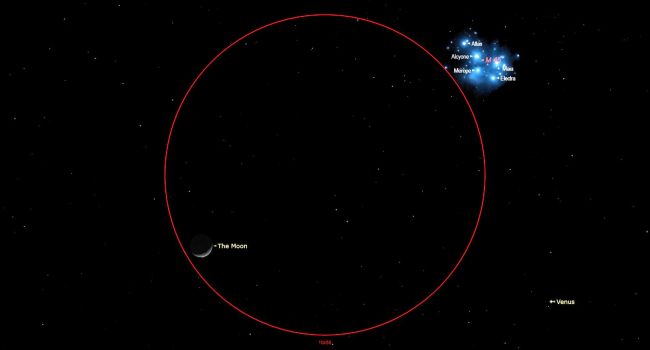 (Image credit: Starry Night) In the western sky after dusk on Saturday, March 28, the waxing crescent moon will make a pretty sight as it forms a triangle to the left of Venus and the bright little open star cluster known as the Pleiades, or the Seven Sisters. The moon, planet, and star cluster will span an area of sky smaller than an outstretched fist's diameter