JACKSONVILLE, Fla. — Before we jump into the last month of 2019, let’s briefly go back to November. Venus and Jupiter made numerous brilliant displays in the western sky just after sunset. If you remember seeing those two really bright stars just after the sun went down, you were looking at planets! They were right next to each other several nights as November progressed and made for some AWESOME pictures from the First Alert Skycam Network (and from cell phones):

Stars make a similar dance during the first half of December. This time, it’s Venus and Saturn. I would expect Saturn to be the dimmer star because it is much farther way than Venus. Comparing it with the picture above, I would also expect Saturn to be dimmer than Jupiter. Because it’s farther away. But you knew that. Jupiter will be leaving the party the first couple weeks of December, and Saturn and Venus then take over, as noted in the picture below from Sky & Telescope.

The Geminid Meteor Shower takes center stage in mid-December, peaking on December 13-14. NASA scientists suggest though that meteors will still be visible a few days after that time period. Experts expect 20-30 meteors will be visible per hour, but a full moon will be in the sky, making it a bit harder to see. Geminid meteors originate from an asteroid called 3200 Phaethon. According to astronomers, the stream of meteors and junk from 3200 Phaethon is steadily moving closer to earth because of Jupiter’s gravity. That’s kinda cool.

Look for Gemini in the eastern sky on December 13 - The Twins! Photo below courtesy Sky and Telescope. 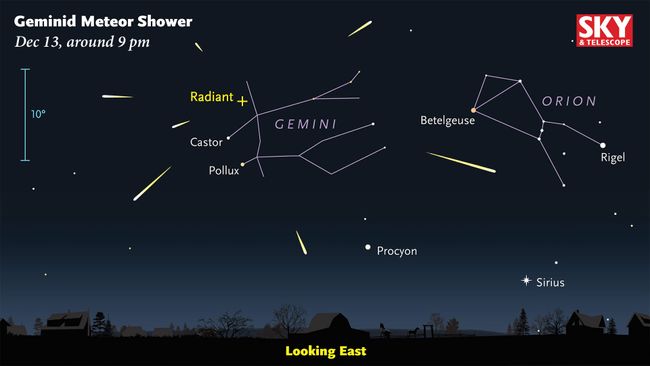