Talking the Tropics With Mike: Active Atlantic but no land threats anytime soon

The strong tropical wave - ‘98-L’ - was upgraded Wed. afternoon to tropical depression #18 then to tropical storm “Sam” Thursday morning & to a hurricane early Friday (avg. date for the 7th Atlantic hurricane is Nov. 16) while marching westward at a lower (more south) latitude than recent waves. There are still question marks on how far west this one might make it but heads up for the Northeast Caribbean by the middle of next week or so. Sam is a compact storm & will go “major” this weekend followed by essentially a steady state intensity for at least several days into next week minus some fluctuations due to structural changes & eyewall replacement cycles.

As for the steering of Sam... it *might* still be a little early on the re-orientation of the steering currents that will be ongoing into early Oct. which will have a big role on how far west Sam manages to get. The European model is west/northwest on a march to just north of the Virgin Islands & Puerto Rico *but has been trending north for several days*. The GFS model has been - & continues - indicating a sharp turn north & out over open water well east & north of the Caribbean. The UKMET model track forecast has generally been a split between the Euro & GFS, but its intensity forecast has been all over the place.

Ultimately... the end result - Sams’ track - will be driven by this month’s re-adjustment of the upper level flow across the Northern Hemisphere which includes a pretty persistent trough the last couple months over & near the Eastern U.S. & Western Atlantic. If the trough stays, the U.S. eastern seaboard is protected with the question being how will Sam interact with the upper level trough (the European model shows a part of the trough cutting off & peeling back to the west while the GFS maintains troughing more to the east). The GFS model has ruled the hurricane season so far, so I’ll maintain a nod on a turn more northward in time. But this situation will be one to carefully watch/monitor so stay tuned. There is a chance for a fairly close call for parts of New England & Newfoundland in a week or more.

This is the 2nd earliest formation of the 18th named storm in the Atlantic basin, moving ahead of the infamous 2005 hurricane season, and only trailing last year.

And another African tropical wave will emerge off the coast of Africa this weekend & has the potential for long range development as the wave moves west or W/NW.

And some remnants of Peter remain over the Central Atlantic intertwined with an upper level trough. There’s some chance for an attempt at re-generation while moving northeast over the open Atlantic.

Notice Sam is coming out of a good deal of African dust (brown/gray area on the satellite below) but the tight inner core of the tropical cyclone has generally protecting the storm from most of the dry air:

“Teresa”: a subtropical system formed beneath a mid/upper level trough north of Bermuda & is not - so far - purely tropical (warm core). Teresa will move north then northeast over the open N. Atlantic while becoming absorbed by a stronger nontropical low. There will be no impacts to any land areas. This will be another short-lived/2 days or less (9th of the Atlantic season so far) named storm with no local or U.S. impacts .

The Bermuda High looks to stay displaced well to the north & east over the Atlantic while a sharp upper level trough moves into the Eastern U.S. Such a set-up should allow for the alleyway to remain over the Western Atlantic for the time being.... *possibly* through much of next week. This set-up is also guiding Teresa. 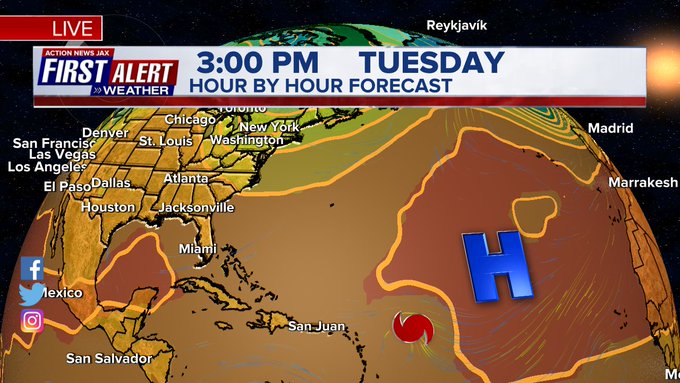 And an unfavorable MJO phase is helping keep recent Atlantic tropical cyclones mostly “in check”, but that’s about to change. There is a lot of “sinking” (brown lines) air over the Atlantic Basin which doesn’t usually favor a good deal of tropical development (there can be exceptions!). *But* the rising air (green lines) will likely overspread the Atlantic through a good part of Oct. leading to a potentially active 2nd to the last month of the Atlantic hurricane season. During this evolution, we’ll have to first monitor the Caribbean & Gulf of Mexico where we’re already getting some hints from long range models of tropical development.

Related to the above discussion - a period of heightened concern for U.S. impacts will evolve toward the end of the month & especially into Oct. - more on that potential *here* in the “Buresh Blog”.

“Mindulle” will develop into a formidable typhoon while cutting sharply north over the open W. Pacific which may be a helpful hint with “Sam” over the Central Atlantic. In other words, Sam turning more north vs. a more west movement.