* the system will be east of the area by Thu. night

Gulf tropical disturbance: there continues to be a tropical disturbance over the Central & Southern Gulf with an increase - albeit disorganized - in t’storms since Tue. While “curious”, any development should be slow to occur, if at all due to a combination of moderate shear out of the west & limited remaining time over water. The disturbance has been moving rather swiftly northeast recently with the low pressure seemingly re-developing & sort of jumping around as convection waxes & wanes.

But - in general - the GFS & European models have come into decent agreement on a weak low pressure area - possibly only a trough of low pressure - moving east/northeast across the Northern Gulf Wed... into the Fl. Panhandle Wed. night, across the far Southeast U.S. Thu. & offshore east of Georgia & northeast of Jacksonville by late Thu. The Euro has at times indicated a surface low that’s a little more organized, but the model has had a tendency to jump around on this disturbance. At this point - whether or not there’s much true development - & the disturbance *could* become a depression while approaching the Gulf Coast - it looks like the primary impacts will be heavy showers & t’storms near & along the Gulf Coast as far east Jacksonville/NE Fl./SE Ga. Wed./Thu. There may also be gusty winds with some of the stronger t’storm bands in addition to an isolated tornado/waterspout.

There’s some chance/opportunity - it would appear - for more significant development once over the Western Atlantic by the weekend but by then the system is moving away from Jacksonville & the U.S. east coast. 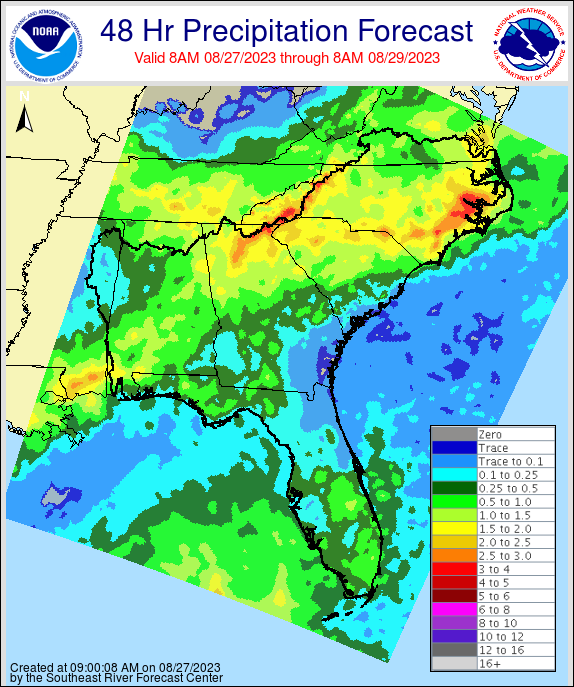 Larry: remains over the Central Atlantic Basin continues be large & powerful hurricane Larry, but the good (great!) news is that the storm will be far from any land areas with the exception of Bermuda.

And despite the hurricane’s considerable distance from any mainland, Larry will be large enough/strong enough to push an easterly swell to the Caribbean & east coast of the U.S. enhancing the rip current risk through much of this week. The eye of the hurricane will reach Jacksonville’s latitude - about 30 degrees N - by Wed.night but 1,000+ miles to the east.

Forecast models are also hinting at *possible* tropical “activity” over or near the SW Atlantic between 1-2 weeks away ~Sept. 18th-23rd. Still very early on this potential, of course but something to watch.