*** No direct impacts from current systems in the tropics for Jacksonville/NE Fl./SE Ga. over the next 5-6 days ***

(1) the tropical wave/disturbance that’s been moving northwest across the Gulf of Mexico strengthened into tropical depression #8 Wed. evening & tropical storm Hanna Thu. evening & into the Atlantic season’s first hurricane early Saturday (avg. first Atlantic hurricane is Aug. 10). Hanna is the fastest ever to the ‘H’ name beating “Harvey” on Aug. 3, 2005. Hanna continued to organize right up to landfall at 6pm EDT at Padre Island followed by a second landfall on the Texas coast a couple of hours later as a strong Cat. 1 hurricane with sustained winds near 90 mph including an eye 20-25 miles across. Hanna is the 4th named storm for July which is just short of the record of 5 set in 2005. Two named storms over the Atlantic Basin at the same time in July last happened in 2018 (Beryl & Chris). Other times since 2000 (Klotzbach): 2011, 2008 & 2005. Hanna will pretty quickly weaken Sunday inland over the Rio Grande Valley.

(2) low pressure over the Central Atlantic became tropical depression #7 Tue. & then tropical storm “Gonzalo” Wed. This is the fastest ever to the 7th named storm over the Atlantic beating “Gert” in 2005 by two days. The avg. date of the 7th named storm is not until Sept. 16th. As expected a combination of dry air, shear & proximity to the S. American coast eventually destroyed the inner core of Gonzalo which is now an open wave & not anticipated to regenerate.

(3) Tropical waves - one strong one in particular - are now rolling off the coast of Africa. Long range forecast models show the potential for some development while making a long track across the tropical Atlantic through early Aug. “underneath” the broad & strong Bermuda high. This one could be a “trouble maker” & the first classic tropical cyclone from the deep tropics of the season. Forecast models, of course, are at odds with one another & sometimes at odds with themselves (from one cycle run to the next). It’s way too early to get too caught up in the modeling or to start to panic(!). The European has the system in the Western Caribbean by next weekend/early the following weak & rather weak... the GFS is faster & has the system near/east of Fl. by late in the upcoming week... & the UKMET is between the two on timing but stronger indicating a hurricane north of Puerto Rico by the weekend. Overall forecast models through the day Saturday have generally trended north. One to watch no doubt!

(4) A little upper level disturbance/trough of low pressure looks like it’ll be left behind from Hanna over the weekend/early next week over the Northern Gulf of Mexico. While not particularly likely, it’s not out of the question, clusters of t’storms could fester with this disturbance helping to induce surface low pressure. IF so, this could be an area to watch for rather sudden/short term tropical development - anywhere from Louisiana to the Fl. Panhandle. Not a likely scenario but something to keep an eye on. The low will then emerge over the Western Atlantic by the middle of next week where there could also be some potential for tropical development as the low rides on out northeast over the Atlantic. Forecast models are indicating nothing at the moment.

There has also been a rather persistent cluster of t’storms over/near the Bahamas tied to an upper level disturbance/old tropical wave. No surface development is indicated or expected while the system moves north/northwest then more northward to the east of Fl. Sunday.

Gonzalo moved away from the dry air in the water vapor image below but little else was favorable (land & shear): 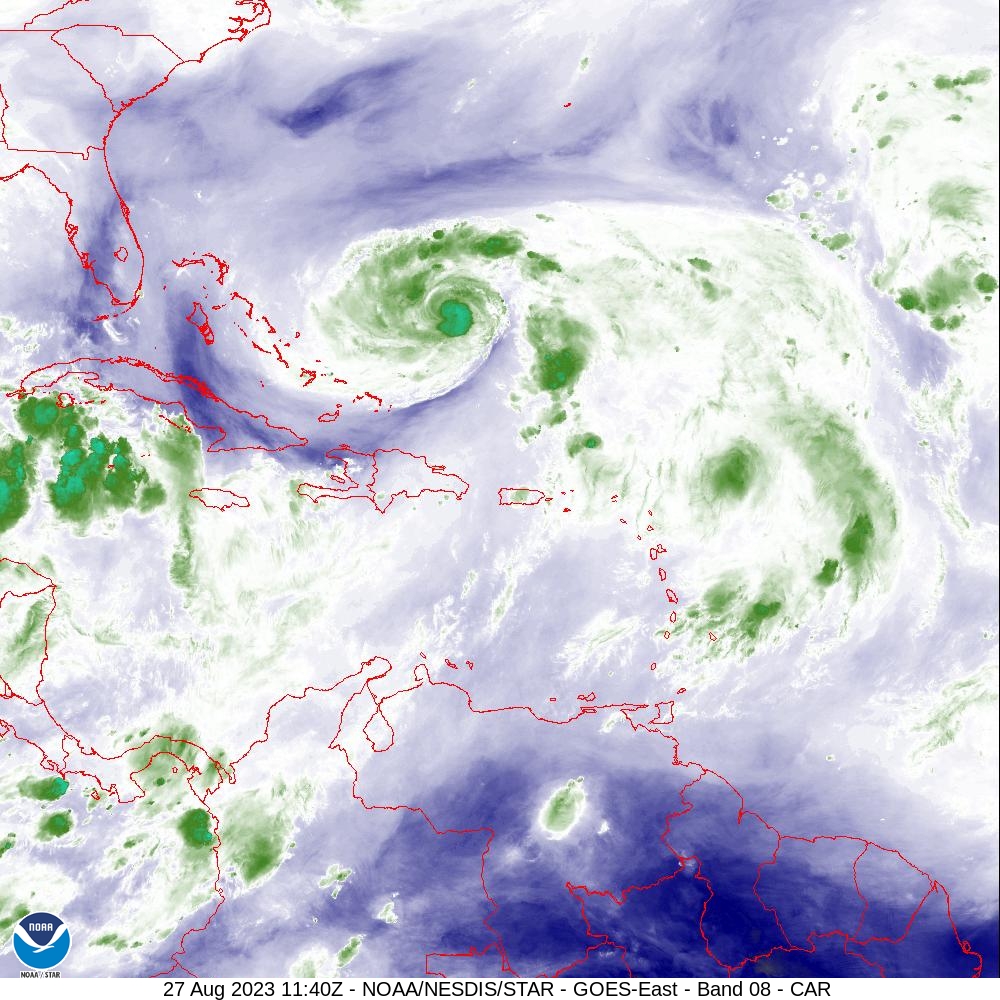 In the East Pacific.... “Douglas” became a powerful Cat. 4 hurricane over the East Pacific Thu. after rapidly intensifying but has peaked... is leveling off.... & will now gradually weaken. Douglas will move over & near the Hawaiian Islands & may still be a formidable tropical storm or even low end Cat. 1 hurricane with the eye projected to go just north of the Big Island Sunday. Hurricane WATCHES & WARNINGS + tropical storm WATCHES/WARNINGS are in effect. When can states begin processing and counting absentee/mail-in ballots?