Talking the Tropics With Mike: Low over the Caribbean organizes into tropical storm Isaias

*** Low pressure/tropical wave ’92-L’/‘Potential Cyclone Nine’ was upgraded to tropical storm Isaias while still speeding west over the Eastern Caribbean - still unclear exactly how this scenario will unfold but some impacts to Fl. are possible over the weekend into early next week - stay up to date. Isaias is the 5th July named storm over the Atlantic which ties the record for the month set in 2005. It marks the fastest to ‘I’ beating the previous record set by “Irene” in - when else - 2005.

Indications are that the system will be near Fl. by the weekend/early next week but - as it looks right now - not particularly strong. If true, primary local impacts for Jacksonville/NE Fl./SE Ga. would be heavy rain & perhaps gusty winds along with rip currents at area beaches along with rough seas & surf. All, of course, predicated on the exact location & strength. ***

I cannot emphasize enough there will continue to be changes to the track, intensity & impacts. But now that a center has formed, there’s a better chance for more forecast consistency.

(2) intensity. Weaker - more west with a slower turn more northward as has been the case the last several days.... stronger - more north. It looks like a portion of Haiti, possibly the Dominican Republic will interfere with Isaias’s circulation Thu./Thu. night. The terrain of Hispaniola is very mountainous with peaks well above 5,000 feet. A direct passage over the island would likely seriously disrupt the system. The interaction may also cause a new center to form or a “jump” of the center to a little north of the island. 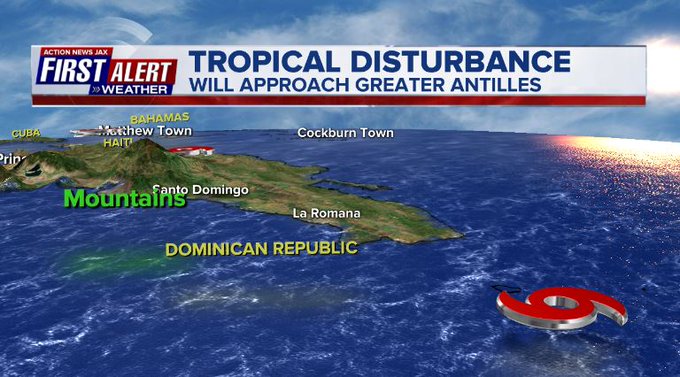 It’s hard to ignore the constant fast west movement though the storm has been slowing recently. The poorly defined center will likely jump around some until & unless it can become couched under the strong convection. This thing can’t turn on a dime when moving 20+ mph. Isaias should slow as it nears the edge of the upper level ridge Thu./Fri. So... it seems a move over parts of Haiti &/or the Dominican Republic Thu. afternoon & evening. We’ll have to see what kind of shape the center is in once north of Hispaniola which will help dictate reorganization & intensification.

Forecast models have generally started to converge on a solution that takes Isaias to the SW Atlantic & Bahamas then east of Fl. to very near the Carolina’s.

The European model seems to have settled on bringing a moderate tropical cyclone to near S. Florida then very near the east coast of Fl. over the weekend... the GFS is now relatively similar though more east in the long run which has been a consistent bias so far not to mention weaker... & the UKMET is between the two but has trended toward the European with a weaker tropical cyclone (had been indicating a strong hurricane at times) in the vicinity of Fl. by the weekend.

Overall forecast models recently have generally trended north & still insist on a northward move soon. Stronger/earlier development would tend to support a more northward track solution. There is a good deal of shear (6th image below) in the vicinity of the wave now - on the order of 25-30+ mph - but the shear decreases the more north & west it goes (until shear increases some late in the weekend/early next week due to an approaching upper level trough). There is also some dry air (7th image below) that may occasionally infiltrate the system as it organizes.

There does seem to be an alleyway of sorts developing near the U.S. east coast/far W. Atlantic. A more organized Isaias may now be sniffing out that alley lending confidence to the more north & east solution in the long run. 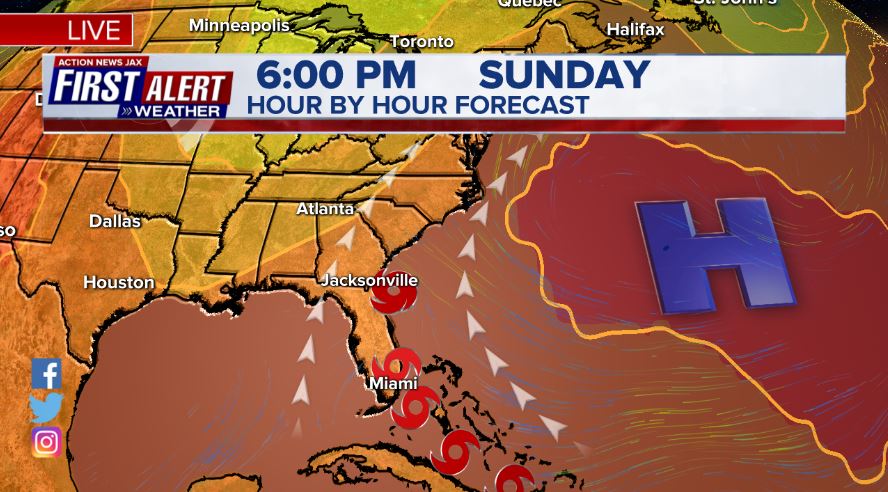 Tropical waves continue to move west off Africa but conditions are not particularly favorable for development at the moment but will need to be monitored, of course.