The story over the Atlantic Basin continues be large & powerful hurricane Larry, but the good (great!) news is that the storm will be far from any land areas with the exception of Bermuda. A second area to keep track of will be over the Central & Western Gulf of Mexico.

*BUT* it continues to like Larry will stay far to the east over the open Atlantic through its lifetime thanks to a displaced - to the northeast - Bermuda High. Larry will get uncomfortably close to Bermuda by Wed./Thu. with at least some impact likely & possibly a significant hit though the current indications are that Larry goes just east of the island.

And despite the hurricane’s considerable distance from any mainland, Larry will be large enough/strong enough to push an easterly swell to the Caribbean & east coast of the U.S. enhancing the rip current risk late in the holiday weekend into next week. The eye of the hurricane will reach Jacksonville’s latitude - about 30 degrees N - by Wed./Wed.night but 1,000+ miles to the east.

There should be some cycling & recycling with fluctuations in intensity due to eyewall replacement cycles. It’ll be interesting to see if Larry tries to go annular.

In any case, Larry is the 5th hurricane of the Atlantic season... the 4th just since Aug. 18th!.... & the first time three Atlantic Basin hurricanes have formed within the period from Aug. 18th to Sept. 2nd. 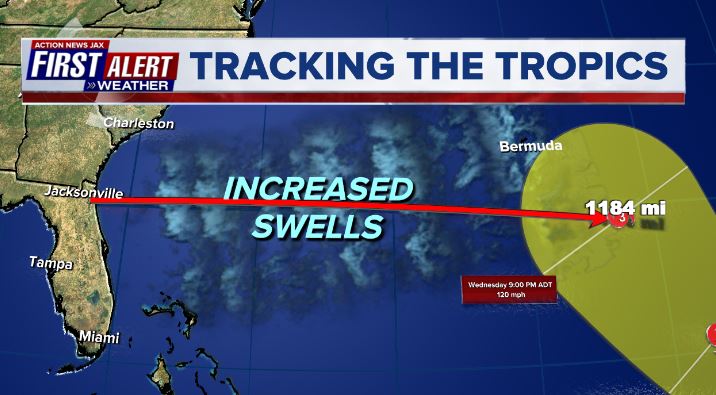 For right now, the Bermuda High across the Atlantic is displaced to the east & northeast through at least the first 10 days or so of Sept. - important for any potential long track tropical systems coming out of the deep tropics. If the Bermuda High stays to the E/NE, it will be difficult for a long track tropical cyclone to make it all the way across the Atlantic. HOWEVER, such a pattern would not help any possible tropical development more to the west.... say - W. Caribbean, Gulf of Mexico or SW Atlantic, etc. So it’s not time to let your guard down.

Beautiful satellite view of the Atlantic & hurricane Larry. Notice Larry is exiting a large plume of Saharan dust (light gray colors) but has still managed to thrive. Moral of the story: African dust doesn’t necessarily just shut down the tropics - especially later in the season when shear & water temps. are much more optimal for tropical cyclones. Not to mention that weaker waves often just simply “wait it out” until they are in a more favorable environment to do their “thing”.

Another area to watch: there continue to be some hints of possible gradual tropical development over the Western/Central Gulf this week. This will be something to keep a close eye on but shower & t’storm activity remains disorganized. The GFS & European models have generally come into decent agreement (the Euro was jumping around a lot, sometimes taking the disturbance to the west while the GFS has consistently been to the east but with varying intensity) on a weak low pressure area - possibly only a trough of low pressure - moving east/northeast across the Northern Gulf. At this point, it would appear the primary impacts will be an uptick in showers & t’storms near & along the Gulf Coast as far east Jacksonville/NE Fl./SE Ga. by mid to late week. There’s some chance/opportunity - it would appear - for more significant development once over the Western Atlantic by the weekend. 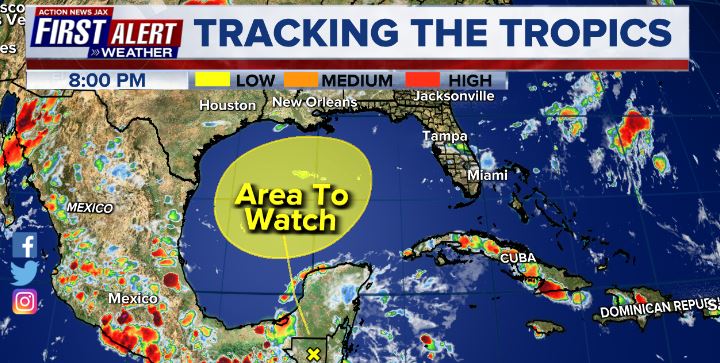 The peak of the hurricane season (Sept. 10) is less than one week away & ocean temps. remain “fit” to help maintain tropical cyclones.