** No impact from Fiona for Jacksonville/NE Fl./SE Ga. through the weekend into early next week.... **

Tropical wave - ‘96-L’ was upgraded to tropical depression #7 Wed. morning then to tropical storm “Fiona” Wed. evening. Fiona has been battling a narrow but significant - 30-40 mph - band of westerly shear to its immediate west & northwest has been causing much/almost all of the shower & t’storm activity to stay over the eastern portions of the circulation. But storms started wrapping around the center Fri. evening as the storm appears to be organizing/strengthening. The center may still “jump around” some until the center is completely & strongly wrapped with convection allowing for the low level center to align with the mid & upper level centers. Of note - the center moving a little south of due west into the face of the shear - as was the case Wed./Thu. - has led to eventually powerful tropical cyclones which Fiona could become, most likely - in the longer range. Fiona has recently taken on a more due west or even slightly northwest course with the closest approach to Puerto Rico Sat. night into early Sunday then to near or over the Dominican Republic Sunday night-Mon.

Forecast models briefly trended more west Thu. but have trended back east recently which is why one should not become too obsessed with individual model runs. Some of the real time aircraft dropsonde data was used Thu. in the 18Z (2pm) GFS model run *but not* in the 00Z (8pm) model run which is probably why the GFS had a “hiccup” in the 18Z run showing a track much more west. I bemoan when real time data is not consistently used within the models as it usually causes inconsistency within the models. Either use it with reach run as long as it’s available or don’t use it at all. The good news is that Gulfstream G-IV research aircraft will go into use Sat. & hopefully will continue consistently through next week with the data gathered from the atmospheric environment in & around Fiona then can be used to initialize the GFS for each run. This would help with better initial analysis for models at the beginning of the forecast cycle which would then - in theory - give more accurate output (forecast). The good news is that both the GFS & European models have generally been initializing/starting with a reasonable & accurate depiction of Fiona & its strength/location so far.

In any case... the models have recently come into better general agreement as the GFS is back to where it’s been all week - a powerful hurricane well east of Fl. mid to late next week & generally staying east of the east coast of the U.S. The European model has trended east too though still slower, & now has even joined the “party” in taking Fiona far to the east of the entire U.S. east coast. The model shifted a thousand miles within 12-18 hours(!). The UKMET model - which I like to generally consider when there is great disagreement among the models - is still showing a relatively weak Fiona through next week far to the east of Fl. From an intensity standpoint at least, the UKMET is an outlier.

The westerly shear + somewhat dry air nearby are the most likely reasons for Fiona’s struggles this week. It is worth noting Fiona still managed to produce strong & persistent convection despite less than ideal conditions. Heavy rain, flooding & strong/gusty winds can be expected for Puerto Rico, the Virgin Islands & nearby islands through the weekend... & for Hispaniola Sunday-Mon with the worst conditions over the Dominican Republic. Overall environmental conditions do gradually improve near Fiona over the weekend into next week, so we have to carefully monitor Fiona’s structure & possible intensification. A hurricane over the Northern Caribbean is possible. The big caveat will eventually be land interaction - especially the mountainous terrain of Hispaniola.

From the Greater Antilles, forecast models continue to trend northward next week with Fiona which seems reasonable though how sharply to the north - & when - is up for great debate. The model spread continues to vary widely depending on the model & depending on the day. The European model continues to take a relatively weak Fiona just about due west a little south of Puerto Rico then over Hispaniola before turning more north while intensifying once near the Central/Eastern Bahamas before slowing & little turn more northwest late next week before turning to the northeast. The GFS model takes a slowly strengthening Fiona near/just south of Puerto Rico then starts to turn Fiona north early enough/fast enough to mostly avoid Hispaniola to the immediate east through the Mona Passage (between Dominican Republic & Puerto Rico). This path would mimic Matthew in 2016 (in the short term!) which shot through the narrow (only about 80 miles) strait of ocean with few impacts from land. Obviously - the major differences & lack of inconsistency in the models in the longer range over the SW Atlantic is a major forecasting headache & will be hopefully ironed out over the next few days. But I still favor - at this point - the track well east of Florida.

On the current official forecast track, Fiona will move near or a little east of some of the highest mountain ranges of Haiti & the Dominican Republic. It’s this part of the forecast - Puerto Rico & Hispaniola - that right now is the most critical - the “fork in the road” when it comes to strength once over the SW Atlantic given the track over land could seriously disrupt Fiona’s organization. The two most major steering influences otherwise will be: (1) the Bermuda high (clockwise circulation) which remains well to the northeast over the Atlantic but may try to flex its muscles some later next week... & (2) the strength of Fiona - weaker is longer to the west, stronger is faster to make the turn more northwest then north.

Overall - once away from the Greater Antilles/Leeward Islands - it looks like conditions (water temps., shear & moisture) will favor strengthening next week. It *appears* Fiona will stay east of Florida & most of the U.S. east coast, but it’s still early on this part of the forecast, & we shouldn’t let our guard down on a track more west, especially considering the inconsistency within the forecast models.

Another interesting tidbit... a typhoon over the W. Pacific will turn sharply to the north then northeast impacting Japan over the weekend (track map at the bottom). This typhoon teleconnection might correlate rather well with Fiona over the W. Atlantic next week & the rather sharp turn north & - in time - northeast. This correlation is possible because of the upper level pattern - troughs (dips) & ridges (upside down U’s) in the jet stream - that often (not always) mirror each basin (Pacific & Atlantic). See maps 6 & 7 below.

So to recap: Fiona is a storm that will have at least have some impact on the Northern Leeward & virtually all of the Eastern Windward Islands of the Caribbean (no direct impacts to Cuba) through the weekend with very heavy rain & strong winds with flooding & possible mudslides... then eventually *perhaps* an impact to some of the Bahamas next Tue./Wed. followed by a move northwest then more north & - finally - northeast. The details for next week are still fuzzy & subject to change. We’re in the early stages of a system that is just getting its act together & there are plenty of question marks ahead.

Elsewhere... a couple of pretty strong tropical waves are over the Eastern Atlantic with at least some potential for slow development. A more southern latitude wave just off the African coast may try to chug its way westward through next week.

Some weak low pressure is developing over the Western Atlantic to the east of the Carolina’s in response to an upper level trough. The low should move slowly east/southeast embedded within strong shear that will likely hinder development. Spaghetti plots including the ensemble (faint lines showing all the model runs which gives an indication of the uncertainty):

Mountainous terrain over especially the Central & Western portions of Hispaniola with some peaks 10,000+ feet: 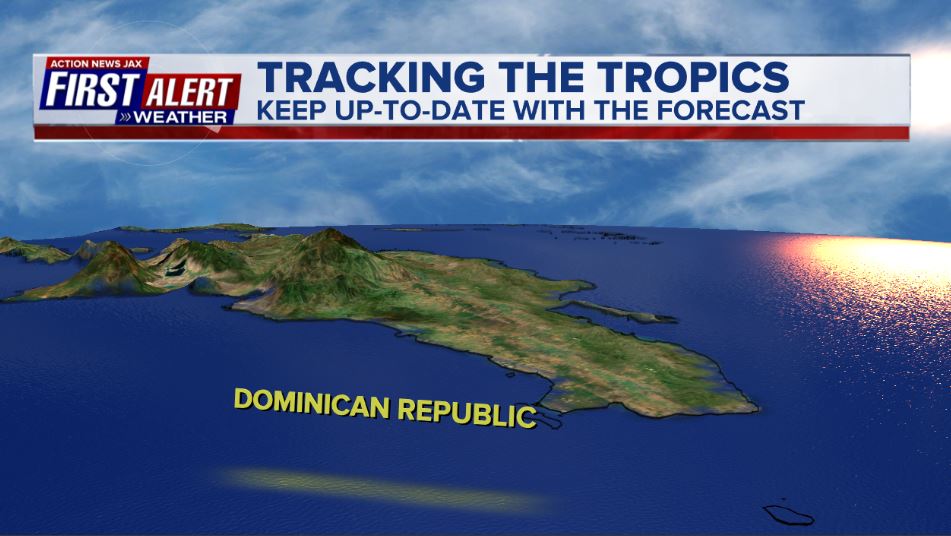 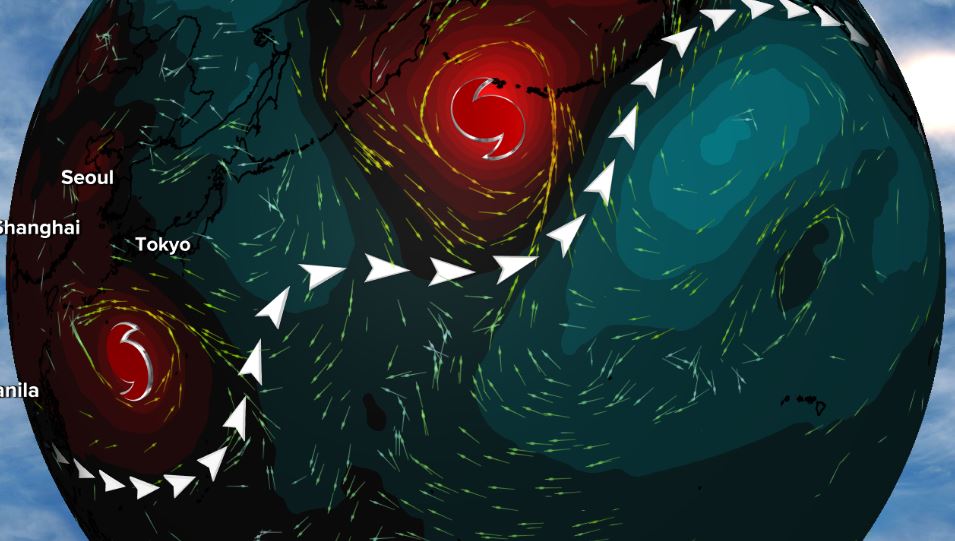 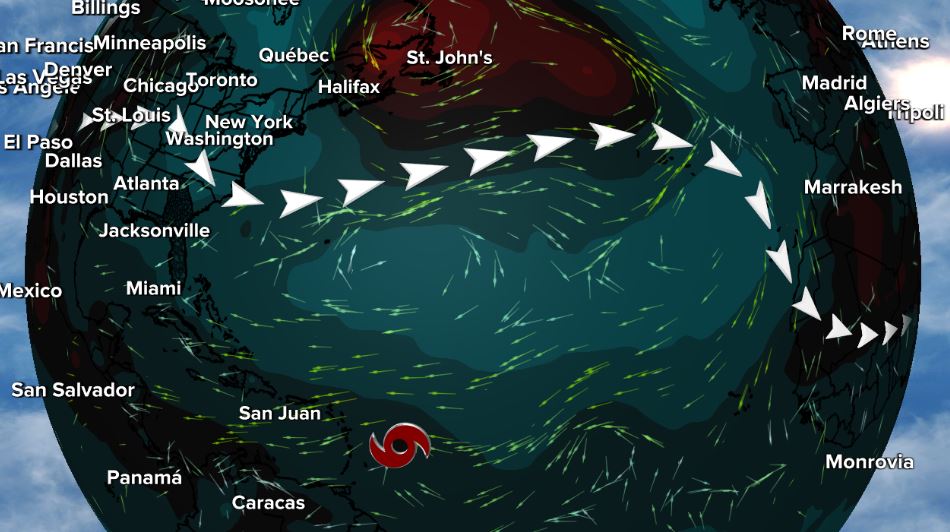 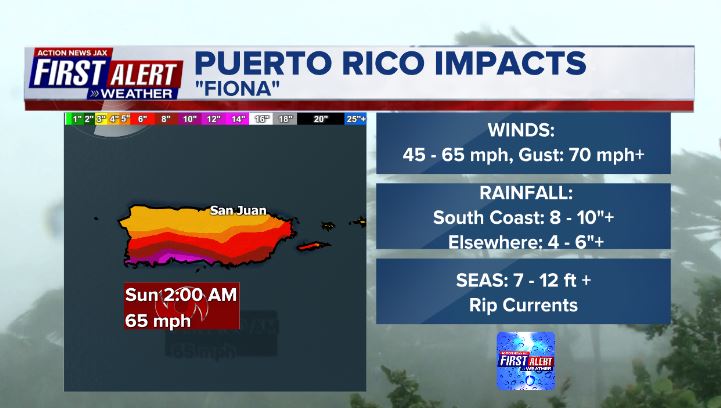 A strong zone of shear - on the order of 30-4+ mph - has become oriented more east/west just north of Fiona. Forecast models gradually decrease this shear & narrow the “zone” to the north & east. 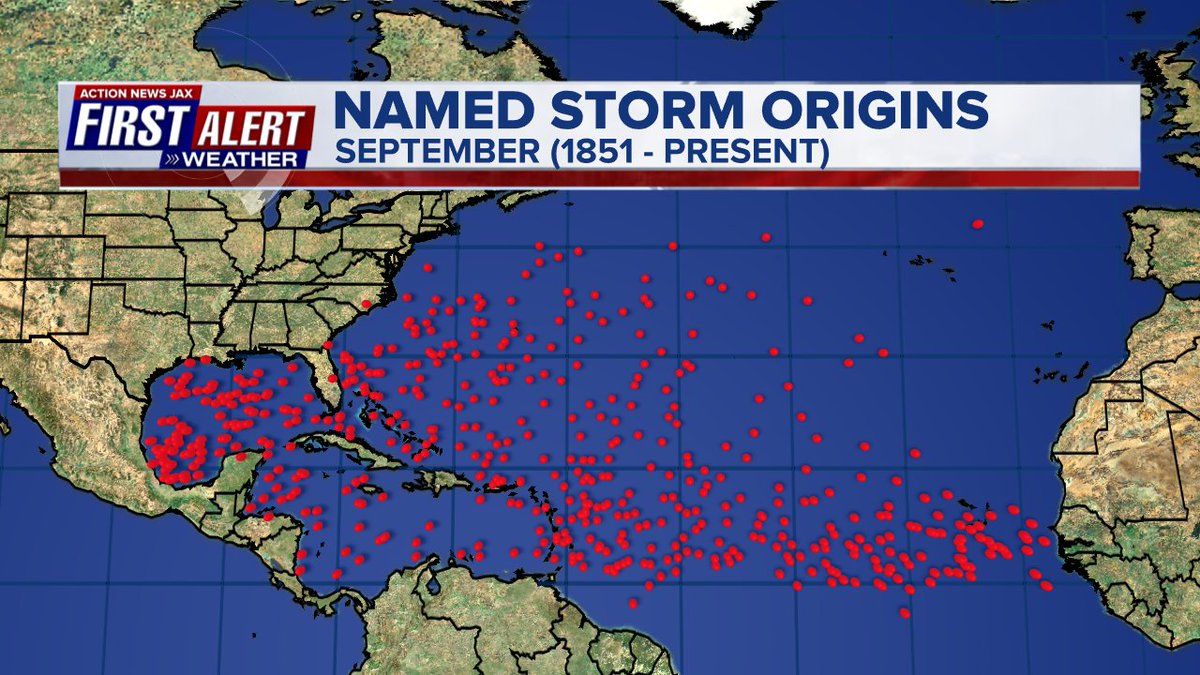 Averages below based on climatology for the Atlantic Basin through September. This season so far is well below avg.: 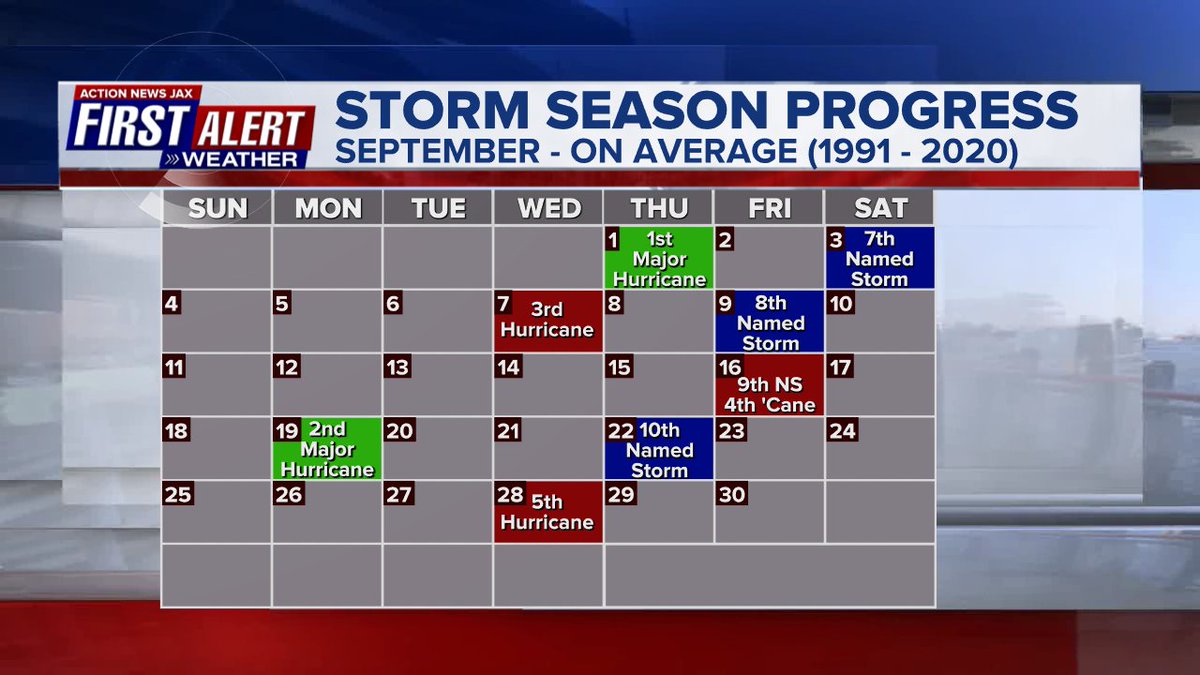 “Muifa” is rapidly weakening after landfall on the China coast:

Strengthening typhoon “Nanmadol” is over the W. Pacific & will impact much of Japan through the weekend into early next week: