Talking the Tropics With Mike: Isaias near & over the Bahamas through Friday night & very close to Florida over the weekend

*** Low pressure/tropical wave ’92-L’/‘Potential Cyclone Nine’ was upgraded to tropical storm Isaias Wed. evening while over the Eastern Caribbean.... moved over Eastern Dominican Republic Thu. afternoon then offshore & quickly reorganized becoming the 2nd hurricane of the Atlantic season a little before midnight. Isaias is the 5th July named storm over the Atlantic which ties the record for the month set in 2005. It marks the fastest to ‘I’ beating the previous record set by “Irene” in - when else - 2005.

Indications are that Isaias will now fairly steadily strengthen through at least Fri. night / Sat. morning while moving northwest then more northward potentially staying or just glancing the southeast coast of Florida Sat. followed by a track anywhere from ~80 - 130 miles - at least - east of NE Fl./SE Ga. with closest approach late Sunday into early Mon. On this track, impacts locally - which *do not* appear severe - for Jax/NE Fl./SE Ga - subject to change!:

-- bands of heavy rain north & northwest of the center Sunday/Sunday night. Amounts ranging from 1-2″, locally more near the coast to a half inch or less west of I-95

-- a dangerous rip current risk at area beaches with rough seas & surf. The best advice is to stay out of the ocean over the weekend... ships & boats should stay in port.

-- overall - as long as the forecast track is accurate - impacts to NE Fl./SE Ga. should be minor & most significant at area beaches. Electrical & business infrastructure should stay intact & operational through & after the closest passage of Isaias.

Isaias remained reasonably well organized after traversing the rugged terrain of the Dominican Republic Thu. missing some of the highest mountainous peaks. Moving at more than 20 mph, Isaias did not stay over land for much more than 8-10 hours. The overall structure of Isaias remains somewhat ragged with air recon showing the eyewall only 60% closed though that’s more than has been the case at any time. The western circulation quadrant appears to be a little less restricted + there’s very warm ocean water ahead (Gulf Stream) so strengthening is anticipated.

The somewhat disorganized center has been jumping around as it tries to become consistently couched under bursts of strong convection. Hurricane hunter aircraft about 11:30pm Thu. found a small area of hurricane force winds northeast of the center, so the NHC pulled the trigger on an upgrade. Isaias should slow as it nears the edge of the upper level ridge through Fri. night, & we *should* see more of a turn northwest.

Forecast models have generally started to converge on a solution that takes Isaias to the SW Atlantic & Bahamas then a little east of Fl. - but very close to Ft. Lauderdale/West Palm Beach Sat. - to very near the Carolina’s late Monday then to near New England midweek. The expectation is for environmental conditions do be favorable enough for Isaias to maintain hurricane strength thanks to warm sea surface temps., proximity to the very warm Gulf stream & possibly some upper level help from an approaching trough.

Overall forecast models recently have generally trended north & east & still insist on the northward move which is more realistic now that there is a center & the system - as a whole - is “deeper”, better organized. There is a good deal of shear (8th image below) in the vicinity of Isaias - on the order of 25-30+ mph - but the shear decreases the more north & west it goes (until shear increases some closer to Florida due to an approaching upper level trough). There is also some dry air (7th image below) that may occasionally infiltrate the system.

There is an alleyway of sorts developing near the U.S. east coast/far W. Atlantic. A more organized Isaias seems to now be sniffing out that alley lending confidence to the more north & east solution in the long run. The approaching upper level trough moving into the Eastern U.S. should help eventually steer Isaias north then northeast. The trough may help with the upper level ventilation of the storm negating some of the effects of potential low level shear while along or near the east coast & Isaias may undergo a period of fairly “solid” intensification through the weekend/early next week as indicated by some models..... &, therefore, be even stronger - at times - than a Cat. 1 hurricane. However, there may also be some land interaction - especially on the west side of the circulation - over the weekend during the close approach to SE Florida. The GFS model has recently come in stronger as has the operational European & UKMET models & generally agree on a painfully close approach to SE Fl. while turning north then well east of Jacksonville. The GFS remains decidedly faster (by 12+ hours) than either the European or UKMET models. A compromise between all three is the prudent route at this juncture & probably will end up closest to reality. Of note... the UKMET showing a ricochet-effect by sort of “bouncing” Isaias off the SE coast of Fl. then abruptly turning N/NE. The combination of frictional effects from land + the approaching trough make such an outcome plausible. Either way, the eye of Isaias looks to stay well east of Jacksonville in the long run.

As for rainfall... there is the potential for some pretty decent banding of rain north & northwest of the center as “Isaias” approaches NE Fl./SE Ga. The combination of strong onshore flow (winds out of the east), surface convergence & friction should develop enough banding to produce as much as 1-2″+ of rain close to the coast. These bands will be capable of producing wind gusts of 30+ mph as well as isolated waterspouts with most of the rain falling between noon Sunday & noon Monday. 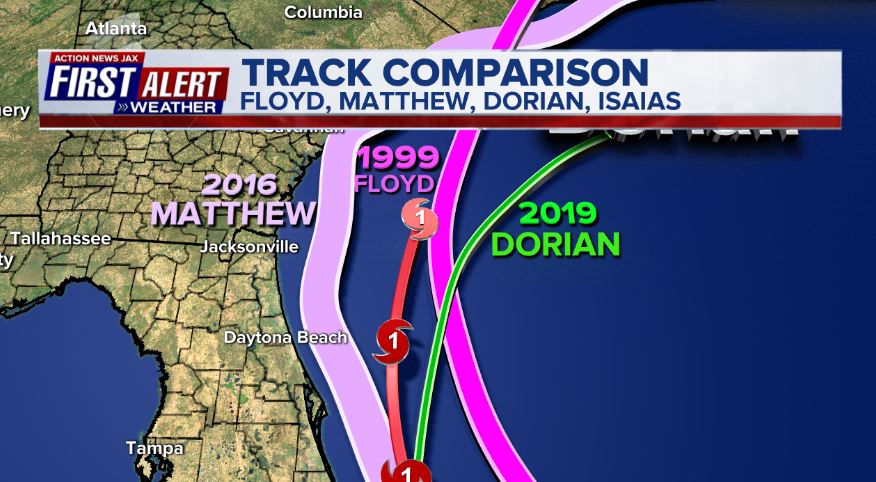 A couple of pretty active tropical waves are over the Central & Eastern Atlantic. A wave at 40-50 degrees West has some long term potential while it moves west/northwest.