LOCAL - JAX/NE FL./SE GA. impacts from Laura: ** None ** ... but folks traveling or who live anywhere along the Gulf Coast from Alabama to Texas - need to stay up to date on future forecasts regarding Laura. The swift northward movement of Laura will mean a threat well inland with wind, isolated tornadoes & very heavy rain/flash flooding.

The 4th Atlantic hurricane of the 2020 season - only 7 other seasons have had as many hurricanes by Aug. 25th - 1886, 1893, 1916, 1966, 1995,1996 & 2005 - Laura is - as expected - the big story coming out of the Gulf as the storm now has been crossing warm water under generally favorable (atmospheric) conditions to allow for steady significant strengthening through Wednesday before reaching the Western Gulf Coast Wed. night-Thu. Models have been stable with a landfall pretty close to - a little west of - where Rita came ashore in 2005 very near the Sabine River close to Beaumont & Lake Charles. This is a very close call for Houston & Galveston, but it appears the eye will stay east of both locations. A track over or near oil wells & the petroleum facilities could mean a “bump at the pump” over the next week or two as well. This is the first “major” (Cat. 3+) hurricane over the Gulf since Michael in Oct., 2018 (Fl. Panhandle) & the first in *August* since Harvey in 2017 (Texas coast & almost 3 years to the day).

There will be plenty of severe impacts for the upper Texas coast, Louisiana & - at least to some degree - for coastal Mississippi & Alabama as well. The relatively fast movement will mean Laura will likely maintain tropical characteristics well inland with with a wind, tornado & flooding threat north into Arkansas then bending east across parts of Tennessee & Kentucky.

Strong tropical wave ’98-L’ was upgraded to tropical depression #13 Wed. then to tropical storm “Laura” Fri. while steadily moving west & across or near Puerto Rico, Hispaniola & Cuba... reaching hurricane strength Tue. morning over the Southern Gulf of Mexico the a “major” Cat. 3 hurricane Wed. morning. This is the fastest to the 12th storm breaking the record of “Luis” on Aug. 29, 1995. As the Bermuda High to the north expands & strengthens, Laura will continue a steady track northwest before turning more northward Wed. night/Thu. once reaching the western edge of the ridge of high pressure. Forecast models are in excellent agreement on such with only slight differences on the exact location & time of landfall. My concerns about a “late bloomer” on this one have come to fruition. There will be an increase in shear &, of course, friction upon approach to land but the size, organization, intensity & speed of Laura will probably negate most of the negative effects keeping Laura intense upon the hit on the upper Texas & SW Louisiana coast.

Of great interest is what happens once Laura is inland. The tropical cyclone will move quite quickly N/NE before bending rather sharply to the right. The GFS model is faster to either dissipate the storm or at least merge it with an upper level trough & secondary surface low far to the north near the Great Lakes. The European & UKMET models on the other hand, keep Laura as its own rather strong entity while rolling east across Kentucky & Tennessee then offshore of N. Carolina/Chesapeake Bay by late in the weekend. Such a track would imply severe weather - wind/rain/tornadoes - all along the track from Arkansas to the east coast with possible redevelopment of a tropical cyclone once offshore of the Mid Atlantic states over the Western Atlantic while moving away from the U.S. over the NW Atlantic. This possibility is too significant to ignore given the potential for property damage all the way from Arkansas & Missouri through parts of the Ohio & Tennessee Valley’s to the coasts of Virginia & N. Carolina. The jet stream is rather strong for this time of year across the mid & northern latitudes of the U.S. so if Laura gets caught up by the steering of the jet stream... remains relatively strong... & is speeding east, it would all add up to a serious & unique weather situation for many states & populated areas far from the initial intense landfall.

Overall conditions across the Atlantic Basin appear “ready to go” as we move through late Aug. & early Sept. (see velocity potential anomalies map below). I’m also tracking at least one potential long track tropical disturbance soon to move westward across the Atlantic that could be near some part of the U.S. between ~Sept. 3 & Sept. 9th.

Rainfall forecast.... with very heavy rain extending well inland due to the swift movement of Laura not to mention a tornado threat: 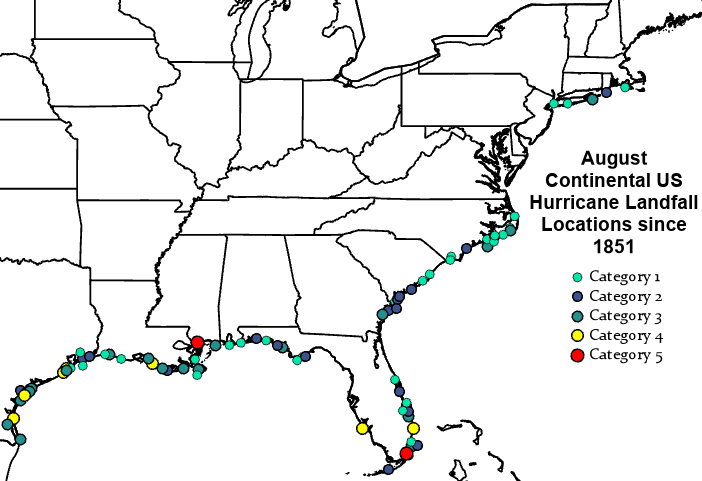 A change of phase of the MJO (Madden-Julian oscillation) should help lead to an uptick in Atlantic tropical cyclones late this month into September. The upper level “velocity potential anomalies” map below shows “upward motion” - green lines - spreading east from the already active E. Pacific. Such a pattern often correlates to an increase in tropical systems that would eventually include the Atlantic Basin.

A strong tropical wave over the far Eastern Atlantic is marching west....

2020 names..... “Nana” is next on the Atlantic list (names are picked at random by the World Meteorological Organization... repeat every 6 years... historic storms are retired (Florence & Michael last year) & Dorian is certain to be retired from the ’19 list....

Deep oceanic heat content is impressive for the first couple weeks of Aug.: