Jacksonville, FL — The Jaguars 2021-’22 schedule is out! Action News Jax CBS47 & Fox30 will again be your official Jags station! There will be 8 games at home, TIAA Bank Field. Avg. afternoon temps. range from well into the 80s in Sept./early Oct. to the 60s by the end of the season which isn’t until Jan. 9th. 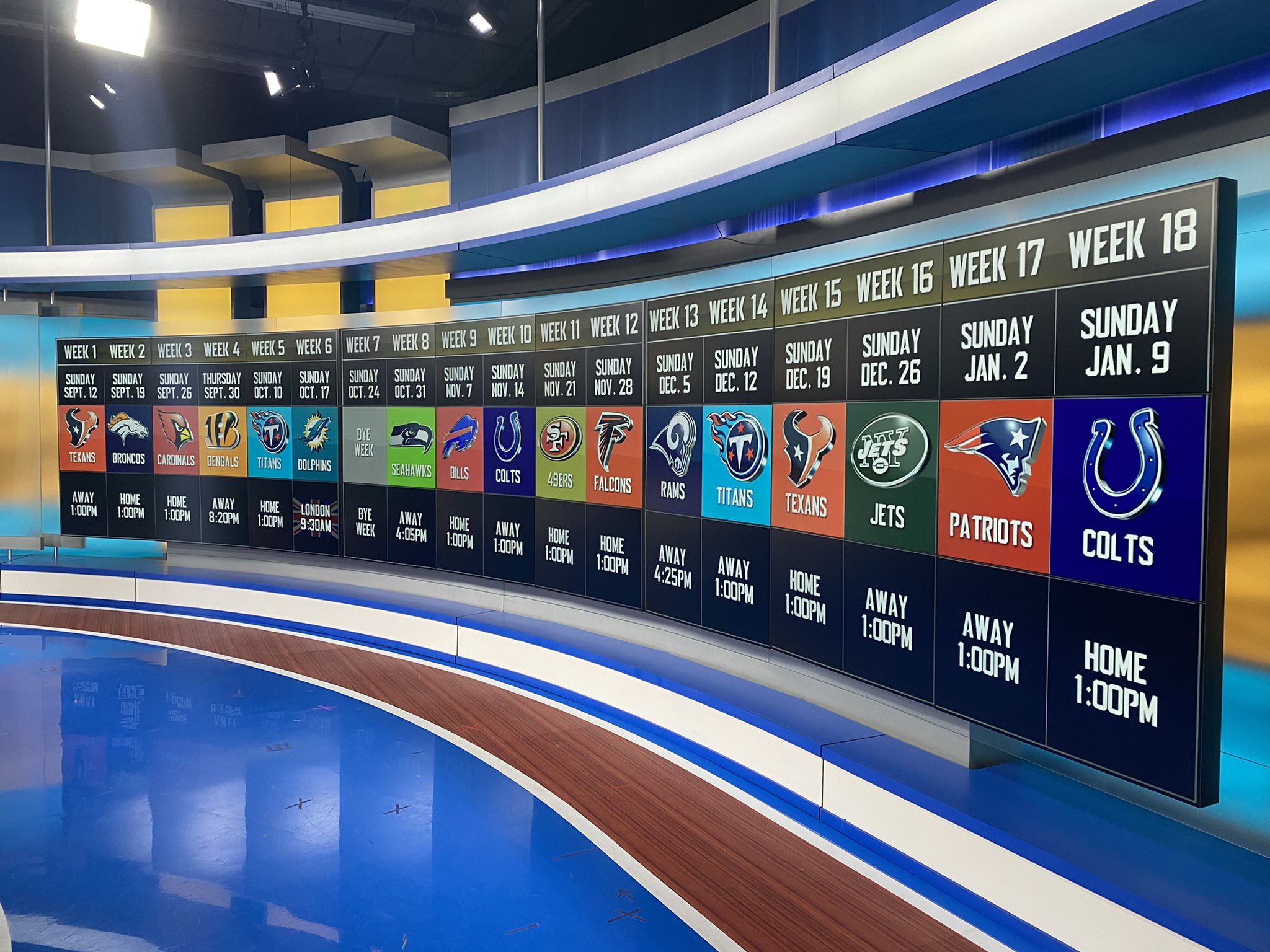 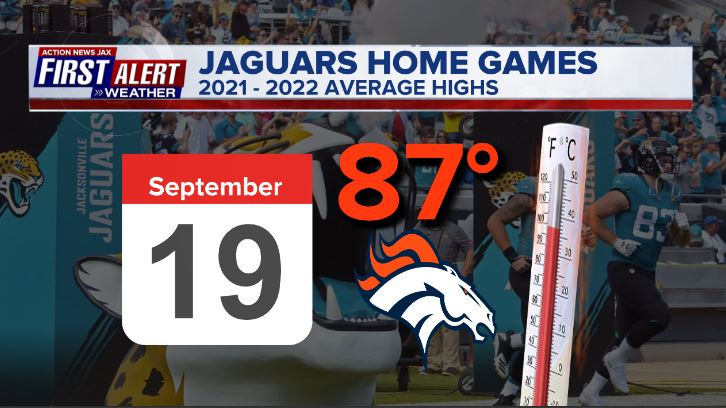 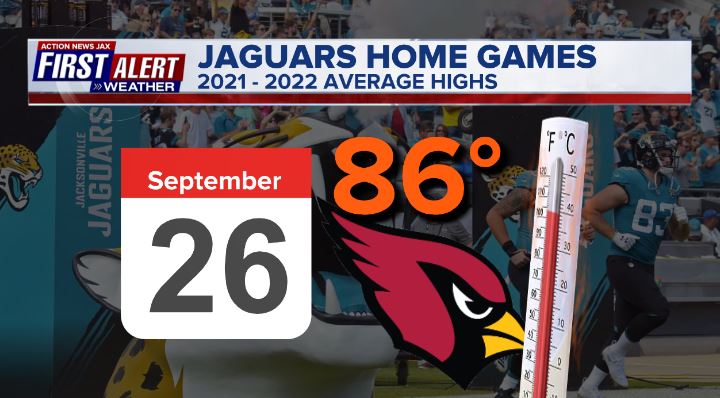 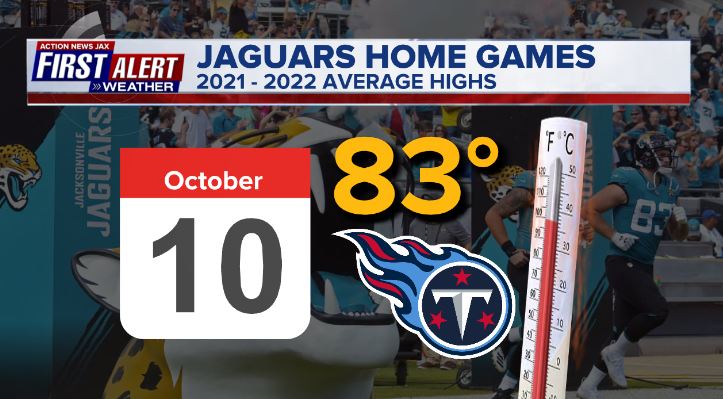 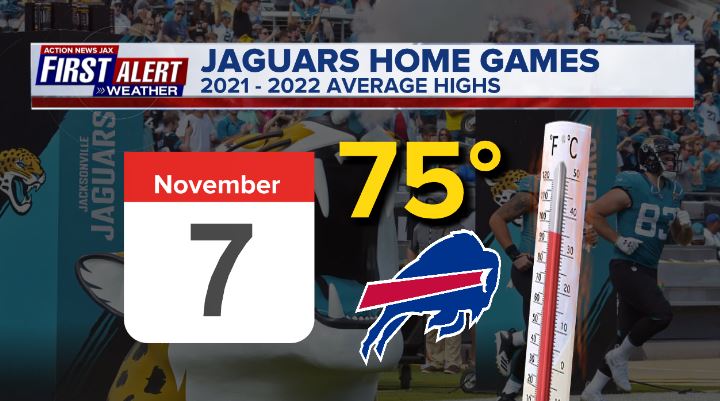 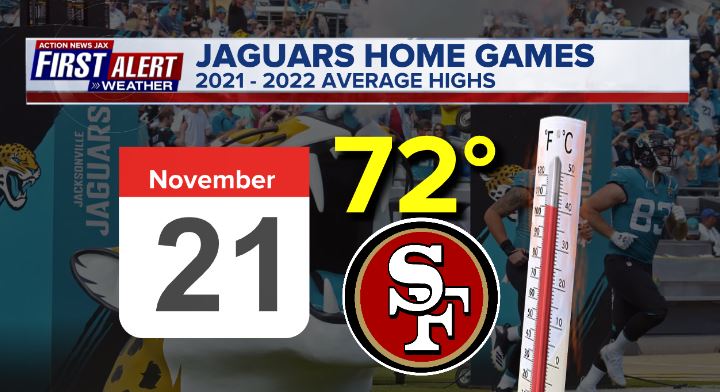 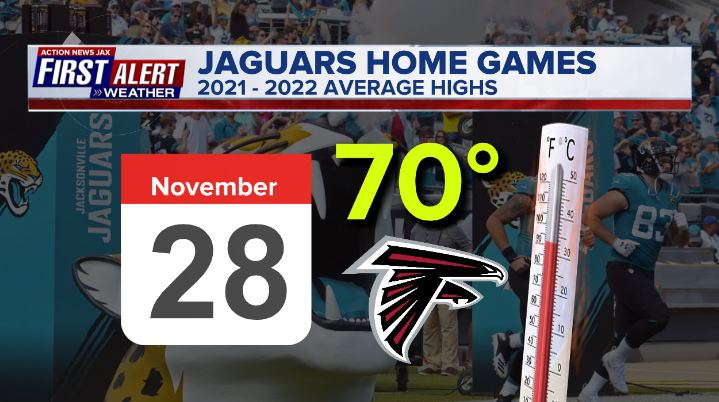 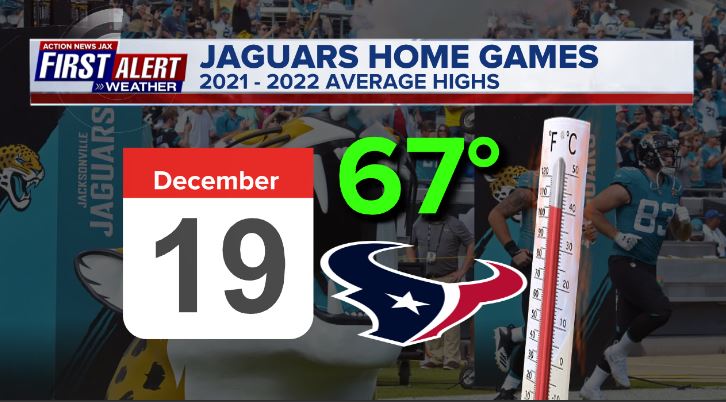 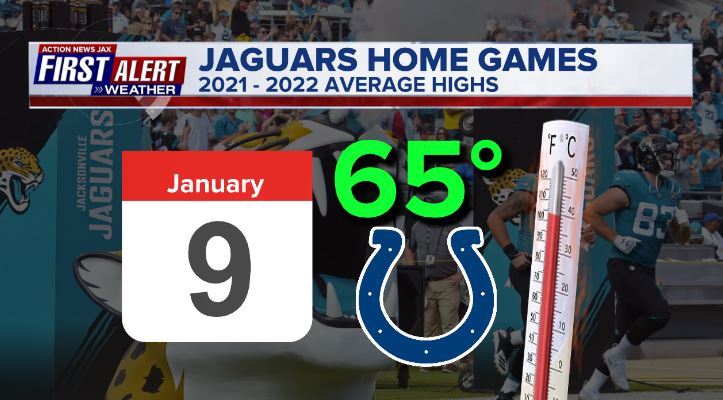 Interesting graphic by Brian Brettschneider showing the change in the number of 90 degree days/year in the decade from 2011-2020 vs. 2001-2010. For Jacksonville specifically, there was increase by more than 10 days per year. Jacksonville has had 4 90-degree days so far this year... the avg. is 82 days/year. 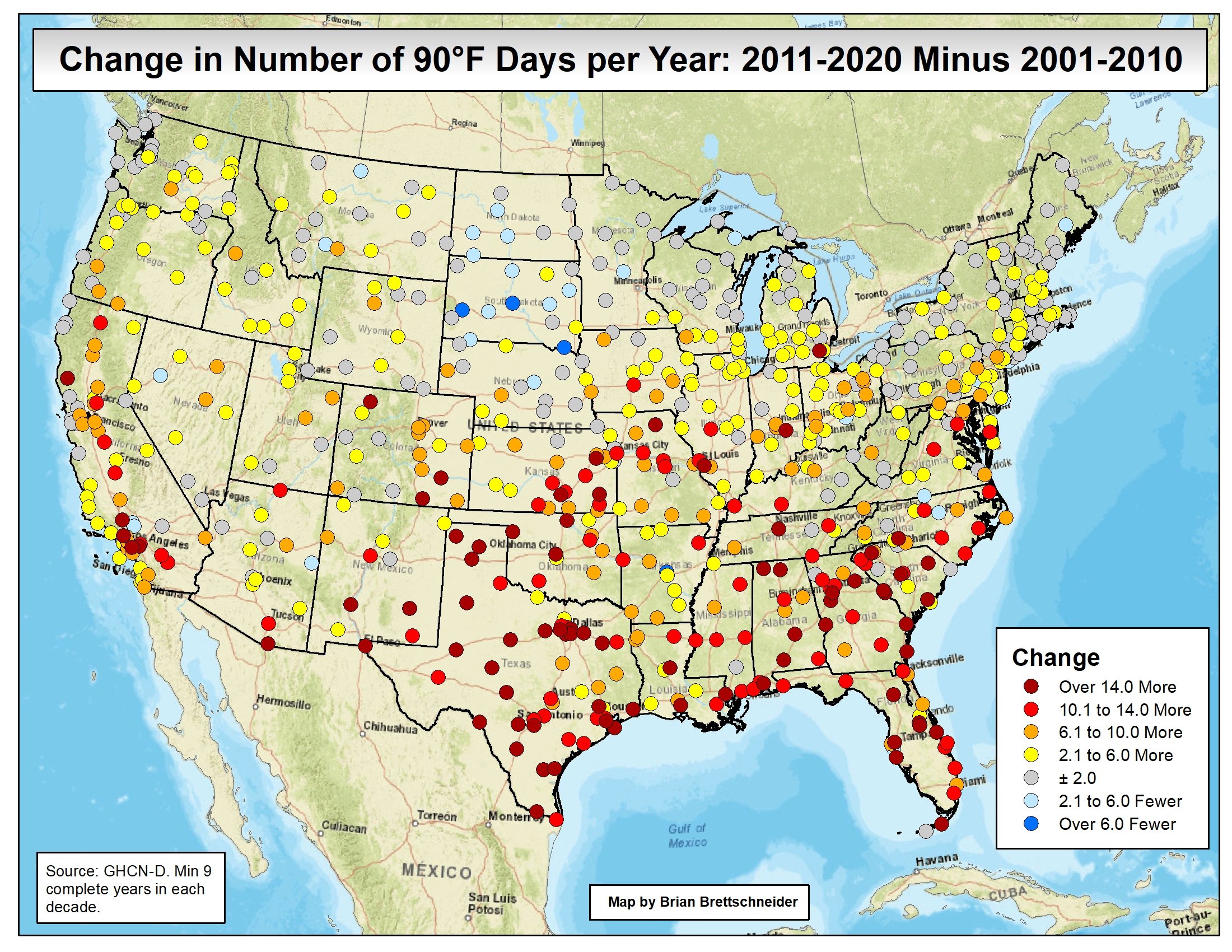 (2) Florida St. University is conducting a survey on the NHC forecast cone & wants your opinion!

“Working on a university grant-funded research project studying public perceptions about the NHC’s Cone of Uncertainty graphic under the supervision of Dr. Jon Ahlquist of the Department of Earth, Ocean, and Atmospheric Sciences. In addition, we are working with several officials from NOAA, the National Hurricane Center, and NWS Tallahassee to help conduct this survey studying modifications of the Cone graphic in an effort to improve hurricane decision messaging.” 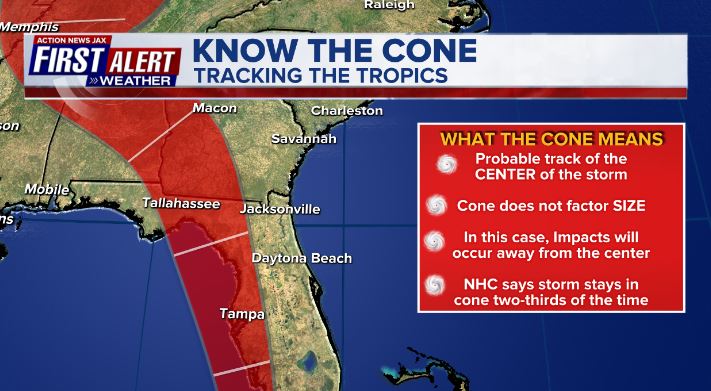 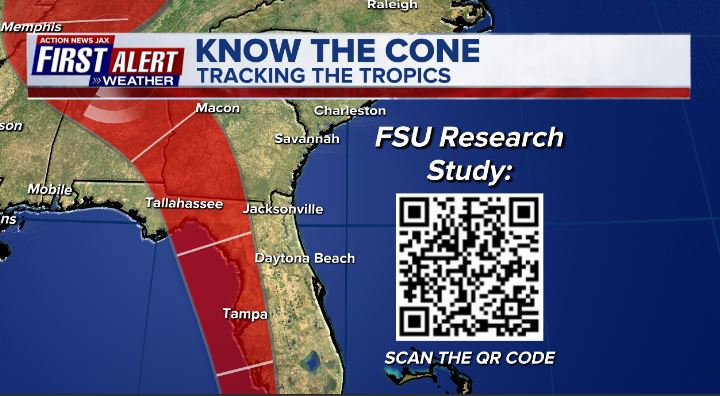 (3) The Salvation Army of Jacksonville is seeking disaster volunteers as the hurricane season approaches:

With peak storm season right around the corner, and an abnormally active 2021 hurricane season prediction, The Salvation Army is having to prepare for battling disasters.

Before a disaster strikes, The Salvation Army needs a team of trained volunteers on standby ready to respond to an emergency. The Salvation Army’s disaster training program offers a variety of courses designed to help individuals and communities prepare for emergency events and become trained disaster volunteers.

The first step in becoming a disaster worker with The Salvation Army’s Emergency Disaster Services program is to create an online profile and complete a simple application. Those interested in becoming a disaster volunteer can begin the application process by visiting: https://disaster.salvationarmyusa.org/volunteer/new/. After completing the online application, your information will be shared with The Salvation Army of Northeast Florida.

“The Salvation Army’s success today is dependent on the army of volunteers standing with us to provide relief assistance immediately to those impacted by disasters,” said Major Keath Biggers, Area Commander for The Salvation Army

During each emergency, The Salvation Army focuses on providing seven core services. These

services may be modified based on the magnitude of the disaster and adapted to meet the specific needs of individual survivors. The Salvation Army core services are training, food service, emotional and spiritual care, emergency communications, disaster social services, donations management and recovery.

“Disaster volunteers respond to a range of local disasters including house fires, wildfires, tornados, man-made disasters, transportation accidents, civil unrest situations and terrorist attacks. Officers, staff and volunteers provide beverages, meals and emotional and spiritual care to first responders and survivors and bring hope and healing to people in need. There are opportunities to serve on local teams as well as statewide or even nationally,” said Larry Huff, Director of Operations.

For questions and more information about our local disaster services and becoming a disaster volunteer, please contact Larry Huff, Director of Operations, at larry.huffjr@uss.salvationarmy.org or 904-301-4844. 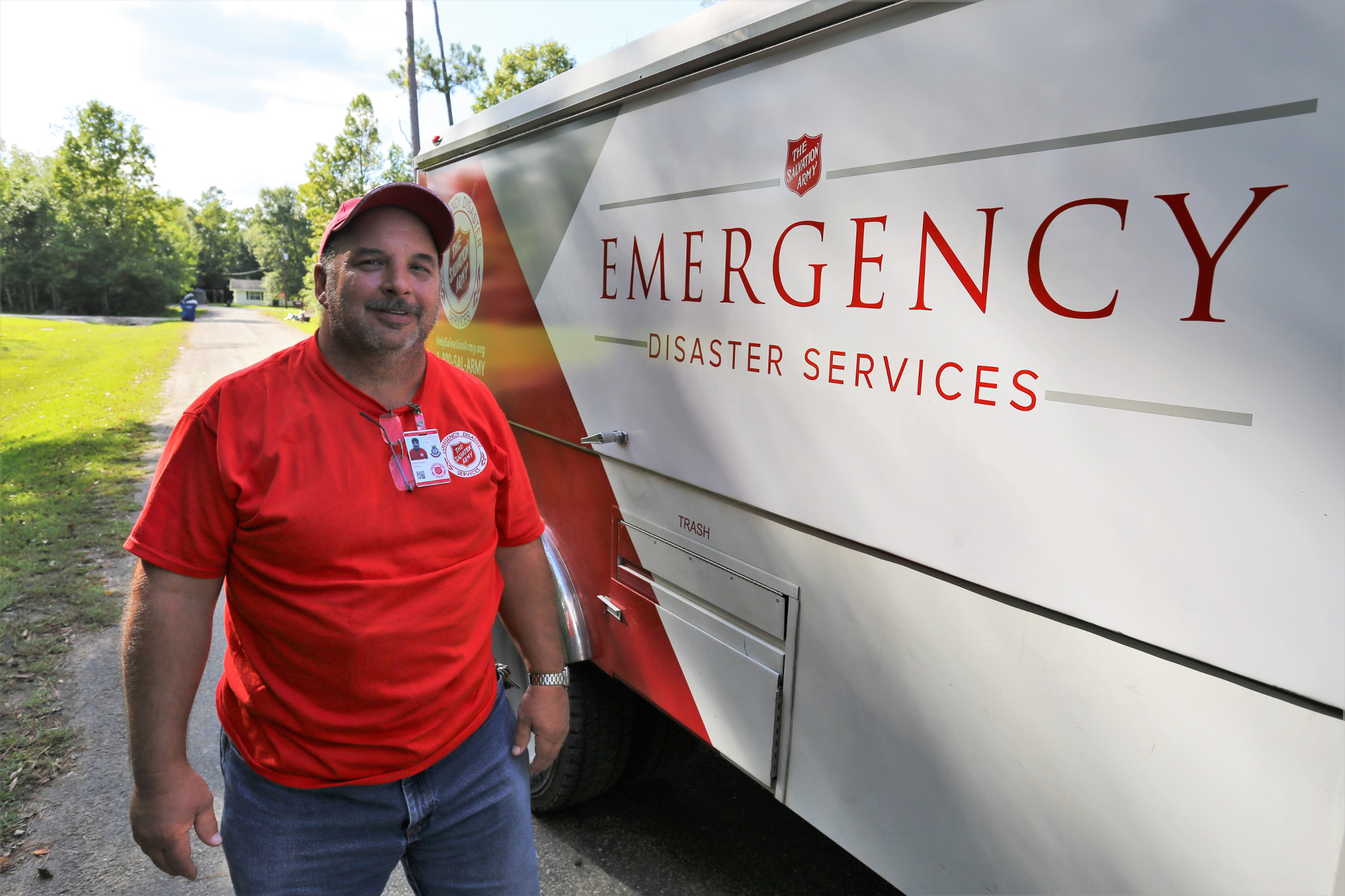 Wow, the Wonders of Wetlands!

Once viewed as mosquito-infested swamps, wetlands are now known to be one of the Earth’s most productive ecosystems — comparable to coral reefs and tropical rain forests!

Over the last 150 years, Florida has lost approximately half of its wetlands (over 9 million acres). During the 1970′s Florida felt the impacts, which included declining fish and bird populations. It was only in the last few decades that we began to appreciate how important wetlands are to our environment, economy, and our health and safety.

The month of May is designated as Americans Wetlands Month, so this affords the perfect opportunity to learn about wetlands and their incredible functions and values. Wetlands are the link between land and water, where the flow of water, the cycling of nutrients and the energy of the sun meet to produce a highly productive ecosystem.

Wetlands are known as “biological supermarkets” for the amazing biodiversity that they support. Because they produce plant biomass and invertebrates, estuaries and coastal marshes serve as nurseries for countless fish and shellfish. Roughly ⅔ of the economically important species in Florida, including some of our favorite game species like redfish, snook, flounder, and trout, depend on coastal wetlands at some point in their life cycle. The Matanzas River Basin, an estuarine lagoon, is very rich in biodiversity — supporting more than 2,400 plant and animal species!

Wetlands provide habitat for endangered and threatened species such as the Florida panther and manatee. And any avid birdwatcher knows that wetlands provide food, shelter, nesting and resting grounds for numerous wading birds, raptors, waterfowl, and songbirds!

Wetlands are also described as “kidneys of the landscape” for their ability to filter harmful pollutants. For example, wetlands capture and store excess nutrients, thereby helping to protect drinking water sources and prevent toxic algal blooms and fish kills. One study found that the filtration capability of a bottomland hardwood swamp in South Carolina was comparable to a $5 million water treatment plant!

Another invaluable function is their ability to soak up and retain floodwaters— much like a sponge. Coastal wetlands and mangroves buffer waterfront properties against storm surges. Maintaining only 15% of the land area of a watershed in wetlands can reduce flood peaks by as much as 60%, saving enormous costs on flood damage. Therefore, by protecting wetlands, we can save lives and property, and help reduce the costly impacts of rising seas and climate change.

Finally, wetlands contribute to our mental health by providing aesthetic and even spiritual benefits. Florida wetlands are among some of the most unique and beautiful landscapes in the world.

One of the best places to learn more about Florida’s coastal wetlands is by visiting the Guana Tolomato Matanzas National Estuarine Research Reserve here in St Johns County. Take your family on a guided hike or a tour of the Visitor Center.

The photo below (Diane Kirkland) is from the beautiful Okefenokee National Wildlife Refuge - less than an hour away from Jacksonville.