Talking the Tropics With Mike: Weak tropical systems will give way to stronger Sam over E. Atlantic

No immediate threats to land areas

Both weak tropical cyclones continue to struggle & should eventually dissipate, open up into a trough of low pressure &/or become post-tropical. The overall environment - pockets of strong shear + some dry air - will ultimately rule the day. Also important - the positioning & strength of the Bermuda High in tandem with a fairly constant upper level trough over or near the U.S. east coast. At this point, it seems any systems over the next week to 10 days will struggle to make it too far west within a the somewhat marginal environment (which includes “sinking air” too) in addition to an alleyway (weakness/trough of low pressure) over the Western Atlantic that remains in place - a sort of U.S. “protector” - at least for the east coast.

Peter is moving more northwest though the low level swirl that is the “center” has had a tendency to drift more west probably due to its shallow nature. A turn more northward should occur the next few days.... keeping Peter north of the Caribbean & Windward Islands.

Meanwhile... Rose over the far Eastern Atlantic & should will move much more north than west & is of no concern for any land areas while weakening later in the week.

In the satellite era, only 2005 and 2020 have had the seventeenth named storm on an earlier date than Sept. 19th.

And “Odette” may try to make a bit of a comeback over the NW Atlantic as the post-tropical cyclone turns more southeast & moves over warmer water again which could help the cyclone become subtropical while remaining over the open N. Atlantic. By the end of the week, the storm will again get forced northeast over the open N. Atlantic & will lose any subtropical characteristics that might have been regained over the next few days.

Meanwhile... another strong tropical wave - ‘98-L’ has marched westward off the coast of Africa but at a lower (more south) latitude than recent waves. ‘98-L’ should strengthen over time & become a named storm. The jury is still out on how far west this one might make it but heads up for parts of the Caribbean in a week to 10 days. It *might* still be a little early on the re-orientation of the steering currents to bring this wave real far to the west, but it’s anything but a sure thing. The European is just about due west to slightly northwest on a march to the Caribbean while the GFS is indicating a sharp turn north & out over open water well before the Caribbean. Stay tuned....

The Bermuda High looks to stay displaced well to the north & east over the Atlantic while a sharp upper level trough moves into the Eastern U.S. Such a set-up should allow for the alleyway to remain over the Western Atlantic which will help turn Atlantic tropical systems more northward before getting very far west. 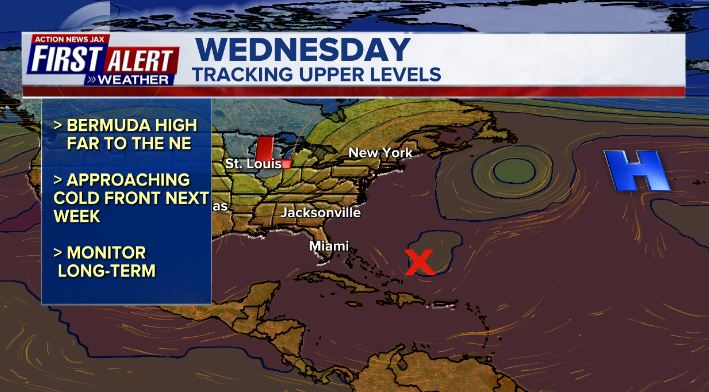 And an unfavorable MJO phase should keep Atlantic tropical cyclones mostly “in check”. There is a lot of “sinking” (brown lines) air over the Atlantic Basin which doesn’t usually favor strong hurricanes (there can be exceptions!). *But* rising air (green lines) will likely overspread the Atlantic by Oct.

Related to the above discussion - a period of heightened concern for U.S. impacts will evolve toward the end of the month & especially into Oct. - more on that potential *here* in the “Buresh Blog”.