DELPHI, Ind. — An unspent .40-caliber bullet found less than two feet from the body of Liberty “Libby” German in 2017 is key evidence tying a CVS pharmacy technician to the murders of German and her best friend, Abigail “Abby” Williams.

An Indiana judge on Tuesday unsealed a probable cause affidavit charging Richard Matthew Allen, 50, of Delphi, with the Feb. 13, 2017, murders of Libby, 14, and 13-year-old Abby. The girls, who were enjoying a day off from school, vanished as they hiked along the Monon High Bridge Trail near Delphi.

Their bodies were found the next day near the bank of Deer Creek, about 1,000 feet northeast of the bridge. The cause of the teens’ deaths has not been made public, but authorities said they died by homicide.

On Friday, the judge issued a gag order prohibiting all involved parties from talking publicly about the high-profile case. According to Fox 59 in Indianapolis, Allen’s defense lawyers are also seeking a change of venue for their client.

Attorneys Brad Rozzi and Andrew Baldwin said Allen “has nothing to hide.”

“Rick is a 50-year-old man who has never been arrested nor accused of any crime in his entire life,” they said in a statement. “He is innocent and completely confused as to why he has been charged with these crimes.”

Allen was charged in late October with two counts of felony murder, which investigators allege were committed as Allen attempted to kidnap the girls. According to the unsealed affidavit, Allen admitted in 2017 that he was on the trail at the time the victims vanished but said he knew neither of the girls and denied killing them.

Detectives looking into the cold case were able to arrest Allen after linking the bullet from the scene to a Sig Sauer P226 that belongs to him, the affidavit states. Though the bullet had not been fired, testing showed that the projectile had been “cycled” through Allen’s weapon.

Allen, who was a familiar face at the town’s only pharmacy, told investigators that he has never allowed anyone to use or borrow the gun, which he purchased in 2001.

Read the redacted affidavit for Richard Allen’s arrest below, courtesy of the Indianapolis Star.

“When asked about the unspent bullet, he did not have an explanation of why the bullet was found between the bodies of Victim 1 and Victim 2,” reads the document, which was obtained by the Indianapolis Star.

Allen and the clothing he said he wore that day — a blue Carhartt jacket and jeans — also match descriptions that witnesses gave of a “kind of creepy” man they encountered at various parts of the hiking trail the day the girls were killed. The man the witnesses saw appears to be the same man that the teens encountered on the Monon High Bridge moments before their abduction.

The suspected killer is seen in a snippet of video found on Libby’s cellphone after the girls’ bodies were found.

Audio from the cellphone also captured part of the encounter, in which a man can be heard ordering the girls down a hill.

Timeline of a tragedy

The recording from Libby’s phone, along with interviews, reviews of electronic records and video from a nearby business helped detectives create a timeline of what they believe happened to the eighth graders on Feb. 13, 2017.

According to court records, a family member dropped Libby and Abby, who the night before had a sleepover at the German home, off at 1:49 p.m. across from the Mears farm. The farm is located along County Road 300 North, across the road from an entrance onto the Monon High Bridge Trail. 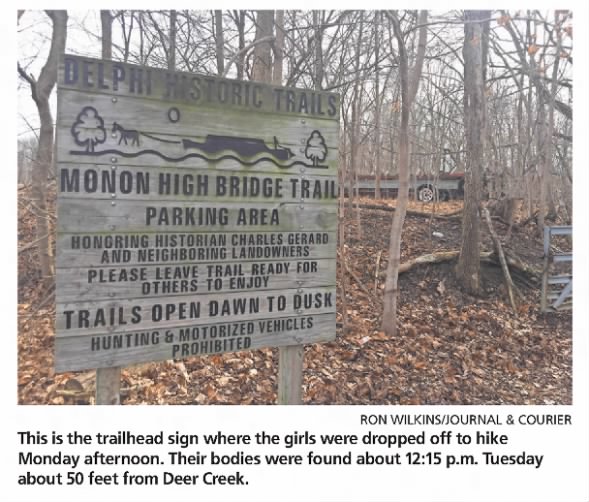 It would take the girls 24 minutes to walk one-third of a mile to the Monon High Bridge, an abandoned railroad trestle that spans Deer Creek and the Deer Creek valley on the southeast end of the hiking trail.

A witness who arrived at the trail just minutes before the girls were dropped off told police she spotted the man from Libby’s cellphone video on the bridge when she reached that point of the trail.

“(The witness) advised she turned around at the bridge and continued her walk,” the affidavit states. “She advised approximately halfway between the bridge and the parking area across from the Mears farm, she passed two girls walking toward Monon High Bridge.”

The woman told police she believed the girls were Libby and Abby. As the witness walked back to her car, Libby and Abby continued going southeast along the trail. According to police, Libby, who is identified in the affidavit as Victim 2, was recording Abby, or Victim 1, as they walked southeast across the bridge.

A Snapchat photo of Abby, timestamped at 2:07 p.m., was the last time either girl was seen alive by anyone other than their killer.

The footage found on Libby’s phone shows the suspected killer walking on the bridge behind the girls. Moments later, one of the girls mentions the word “gun.”

Near the end of the video, a male voice tells the girls, “Guys, down the hill.”

No one walking the trails saw either the girls or the suspicious man after 2:13 p.m. that day, authorities said.

This is the last photo Abby Williams and Libby German posted to Snapchat. #DelphiMurders #StillAMystery pic.twitter.com/p60Pax8Ngi

By that time, the female witness had reached her car near the Mears farm. Video from the nearby business, Hoosier Harvestore, showed the woman leaving the trail parking area at 2:14 p.m.

She told police that as she left, she noticed a vehicle parked in an “odd manner” at an old Child Protective Services building nearby.

“She said it was not odd for vehicles to be parked there, but she noticed it was odd because of the manner it was parked, backed in near the building,” according to the affidavit.

Other witnesses also reported seeing the vehicle, which “appeared as though it was backed in as to conceal the license plate,” parked next to the building. It was described as a dark-colored vehicle, possibly a PT Cruiser, a Smart car or a small SUV. 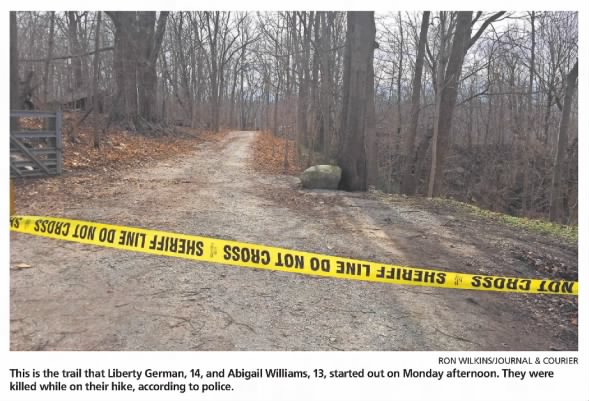 Allen told police in 2017 that he’d parked his car at the “old Farm Bureau building” the day of the murders.

“Investigators believe Mr. Allen was referring to the former Child Protective Services building, as there was not a Farm Bureau building in the area, nor had there been,” the affidavit states.

Allen owned two vehicles in 2017, including a black 2016 Ford Focus. Investigators believe the Ford was the car witnesses describe seeing parked next to the abandoned building.

The Hoosier Harvestore camera captured what appeared to be Allen’s car arriving at the trail just before 1:30 p.m., which coincides with the time Allen said he’d gotten there. A female motorist told police she was traveling east on County Road 300 North around 3:57 p.m. that day when she spotted a man matching the suspected killer’s description walking on the side of the road. The man was walking west, away from the Monon High Bridge.

“(The witness) advised that the male subject was wearing a blue-colored jacket and blue jeans and was muddy and bloody,” the document reads. “She further stated that it appeared he had gotten into a fight.”

Detectives believe that man was Allen.

When Allen was reinterviewed on Oct. 13, days before his arrest, he again admitted he was on the Monon High Bridge Trail the day the girls were slain. He again denied responsibility for their deaths and told detectives he never saw the girls before their deaths.

That same day, authorities executed a search warrant at Allen’s home, where they seized jackets, boots, knives and firearms, including the Sig Sauer P226. The Indiana State Police lab analyzed the gun, including a test firing and function test.

The lab determined that the unspent round found near Libby’s body in 2017 had been ejected from Allen’s gun, according to the affidavit.

Investigators wrote that Allen said he’d never been on the property where the unspent bullet linked to his gun was found. He denied knowing the homeowner and offered no explanation as to how a bullet from his gun ended up near the girls’ bodies.

The ballistic testing, in conjunction with witness statements and Allen’s own words, ultimately led to his arrest.

Allen’s defense team cast doubt on the alleged evidence against him, Fox 59 reported. They said that, in the five years since the murders, he has not gotten rid of his car, his guns or the clothing he wore that day on the trail.

They also refuted the ballistic evidence.

“It is a bit premature to engage in any detailed discussions regarding the veracity of this evidence until more discovery is received, but it is safe to say that the discipline of tool-mark identification is anything but a science,” their statement read. “The entire discipline has been under attack in courtrooms across this country as being unreliable and lacking any scientific validity.

“We anticipate a vigorous legal and factual challenge to any claims by the prosecution as to the reliability of its conclusions concerning the single magic bullet.”

Celsius class action settlement could get you $250

Man facing vehicular homicide charge dies while out on bond