Jacksonville, FL — For daily updates on the tropics: “Talking the Tropics With Mike”.....

As Sky & Telescope calls it - a “Pre-Dawn Planet-Palooza” this month:

All five naked-eye planets will greet early risers throughout the month of June. While seeing two or three planets close together (in what’s known as a conjunction) is a rather common occurrence, seeing five is somewhat more rare. And what’s even more remarkable about this month’s lineup is that the planets are arranged in their natural order from the Sun.

Beginning in early June and throughout the month, go out 30 to 45 minutes before sunrise to see Mercury, Venus, Mars, Jupiter, Saturn — in that order — stretching across the sky from low in the east to higher in the south. Mercury will be tougher to spot: Early in the month, viewers will need an unobstructed eastern horizon as well as binoculars to potentially see the little world. As the month wears on, Mercury climbs higher and brightens significantly, making it easier to see, and thus completing the planetary lineup.

The last time the five naked-eye planets were strung across the horizon in sequence was in December 2004. But this month the gap between Mercury and Saturn is much shorter, just 91° on June 4th — and they haven’t been packed this closely together since 1921.

Key dates for this “planet parade”:

June 3–4: On these two mornings, the apparent gap between Mercury and Saturn was its smallest. A clear view low toward the east maximizes your chances of catching Mercury. There’s less than a half hour between when Mercury first appears above the horizon and when it essentially gets lost in the glare of the rising Sun. Using binoculars helps.

June 24: According to Sky & Telescope magazine, the planetary lineup this morning is even more compelling. First, Mercury will be much easier to spot, making the five-planet parade that much more accessible. And you’ll have about an hour to enjoy the sight, from when Mercury pops above the horizon to when the rising Sun washes it out of the sky. But the real bonus is the waning crescent Moon positioned between Venus and Mars, serving as a proxy Earth. By this time of month, the planets are spread farther across the sky — the distance between Mercury and Saturn will be 107°. 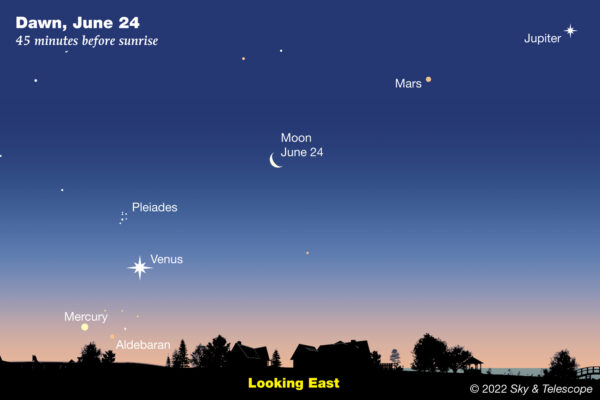 June 18 (dawn): The waning gibbous Moon hangs some 6° below Saturn in the south.

June 21: The solstice is at 5:14 a.m. EDT. Today offers the longest daylight in the Northern Hemisphere all year.

June 21 (dawn): The Moon, only just past last quarter, and Jupiter are a little more than 4° apart.

June 24 (dawn): Look 45 minutes before sunrise to spot five planets across a span of sky from low in the east-northeast to higher in the south; they’re a bit more spaced out than on June 4th, but Mercury is much easier to spot. The waning crescent Moon hangs delicately between Mars and Venus. Make sure you don’t miss this delectable sight!

June 26 (dawn): The earthlit Moon is 2½° from Venus, with Mercury to the pair’s lower left.

June 27 (dawn): The thinnest sliver of the Moon, just one day before new, is 3½° left of Mercury low in the east.

July 2 (dusk): The waxing crescent Moon is 6½° right of Regulus, Leo’s brightest star. Follow the pair as they sink toward the horizon in deepening twilight.

July 4: Earth is at aphelion, farthest from the Sun for the year (around 3.4% farther than it was at perihelion in January).

July 7 (dusk): The Moon, one day past first quarter, is in Virgo some 5° to the upper left of Spica.

The heat is on! Tue., 06/14 temp. officially hit 95 degrees at JIA which is hotter than any day last year. The hottest days of 2021 hit 94 degrees twice in June & twice in Aug. But a high of 95+ is more common than not so ‘21 was an anomaly for Jacksonville within a year that had “only” 65 90-degree days - well below the avg. of 82 days. An upper level ridge of high pressure seems to be rather persistent for much of the rest of this month over the eastern two-thirds of the country. Depending on its exact location, the result could be some days w/ temps. nearing 100 degrees with fewer afternoon t’storms that are typical this time of year. 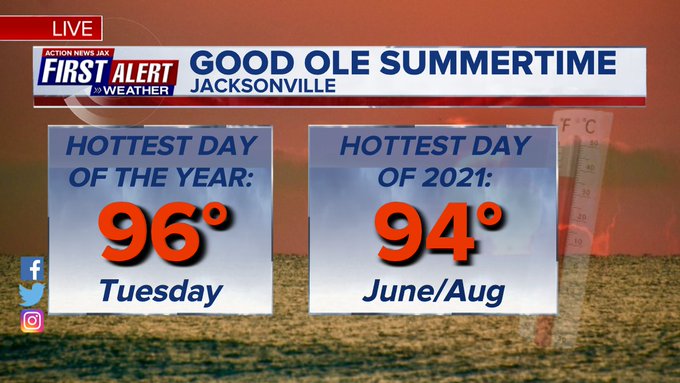 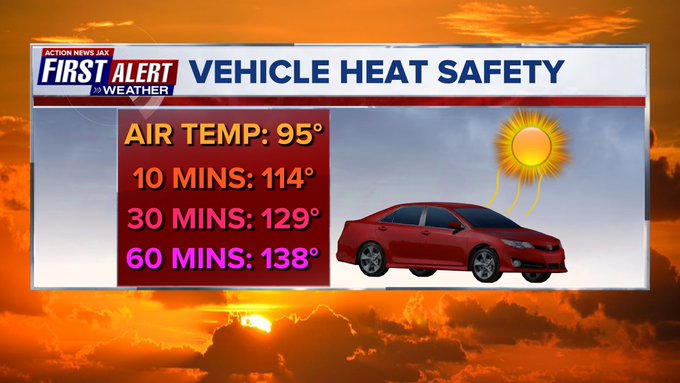 Changes afoot at the National Hurricane Center. Director Ken Graham has been “poached” (I mean that kindly) to head NOAA’s National Weather Service. In the meantime, the very capable Jamie Rhome will lead the NHC which will likely include the peak of the hurricane season (Sept.). I’ve worked with & interviewed both & admire & respect their work. It’s a potentially big loss for the NHC but a big “get” for the N.W.S. And Jamie will do a great job as the acting director of the NHC. Speaking of the NHC.... the very affable Dennis Feltgen retired June 1st. I personally believe Dennis single handedly brought the NHC into the 21st Century in a digital sense with a no-nonsense approach as the Communications & Public Affairs Officer (”spokesperson” or PR) for the last 15 years. While Dennis was strict professionally, he also had a great understanding of working with the media (was a former t.v. meteorologist - 28 years!) mixed with a great sense of humor. Like Ken Graham - big shoes to fill at the NHC. The two pics below are from the National Hurricane Conference in New Orleans in ‘21 (Ken Graham then Jamie Rhome)... the last pic with Dennis is from this year at the Nat. Hurricane Conf. in Orlando: 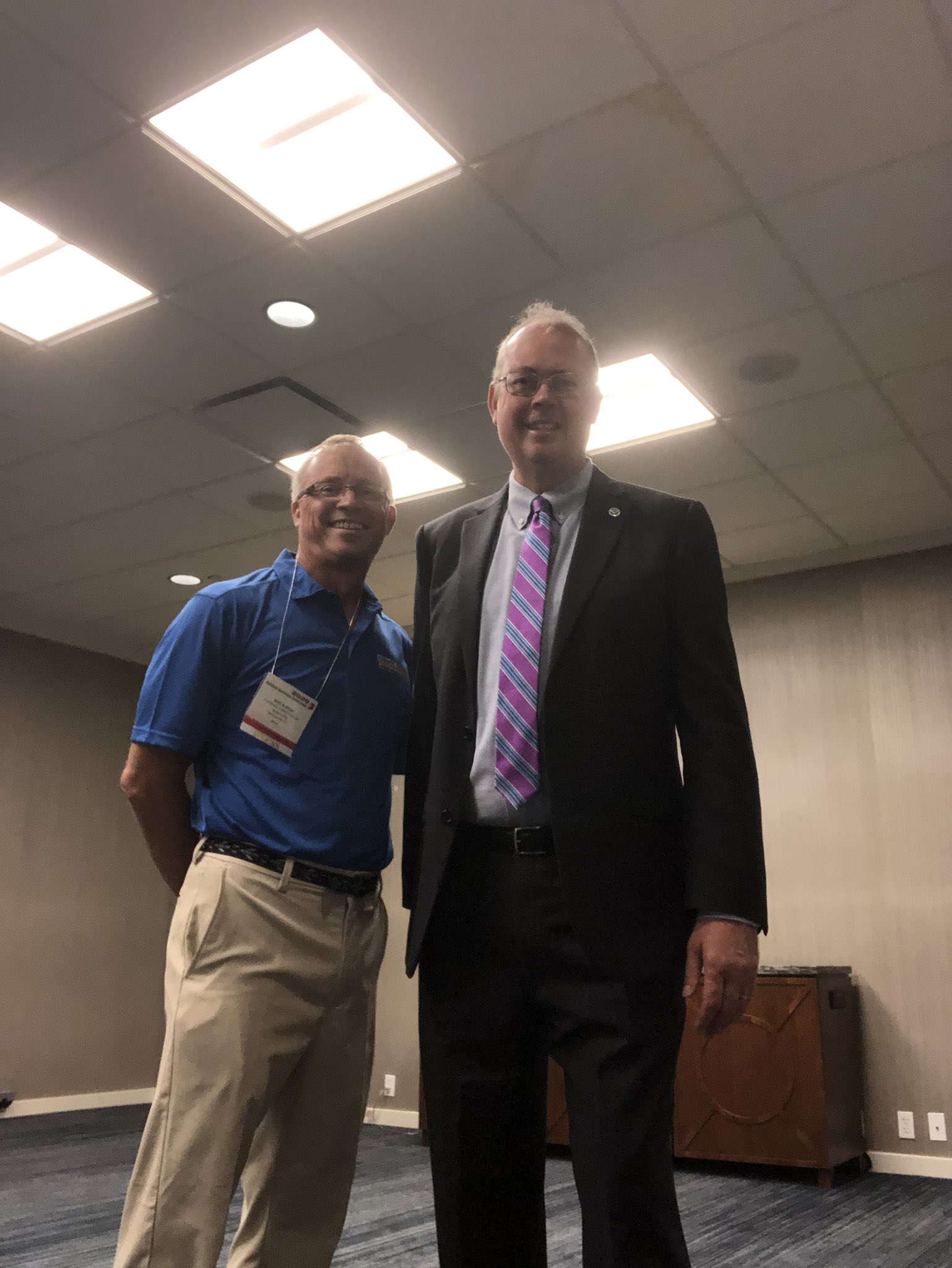 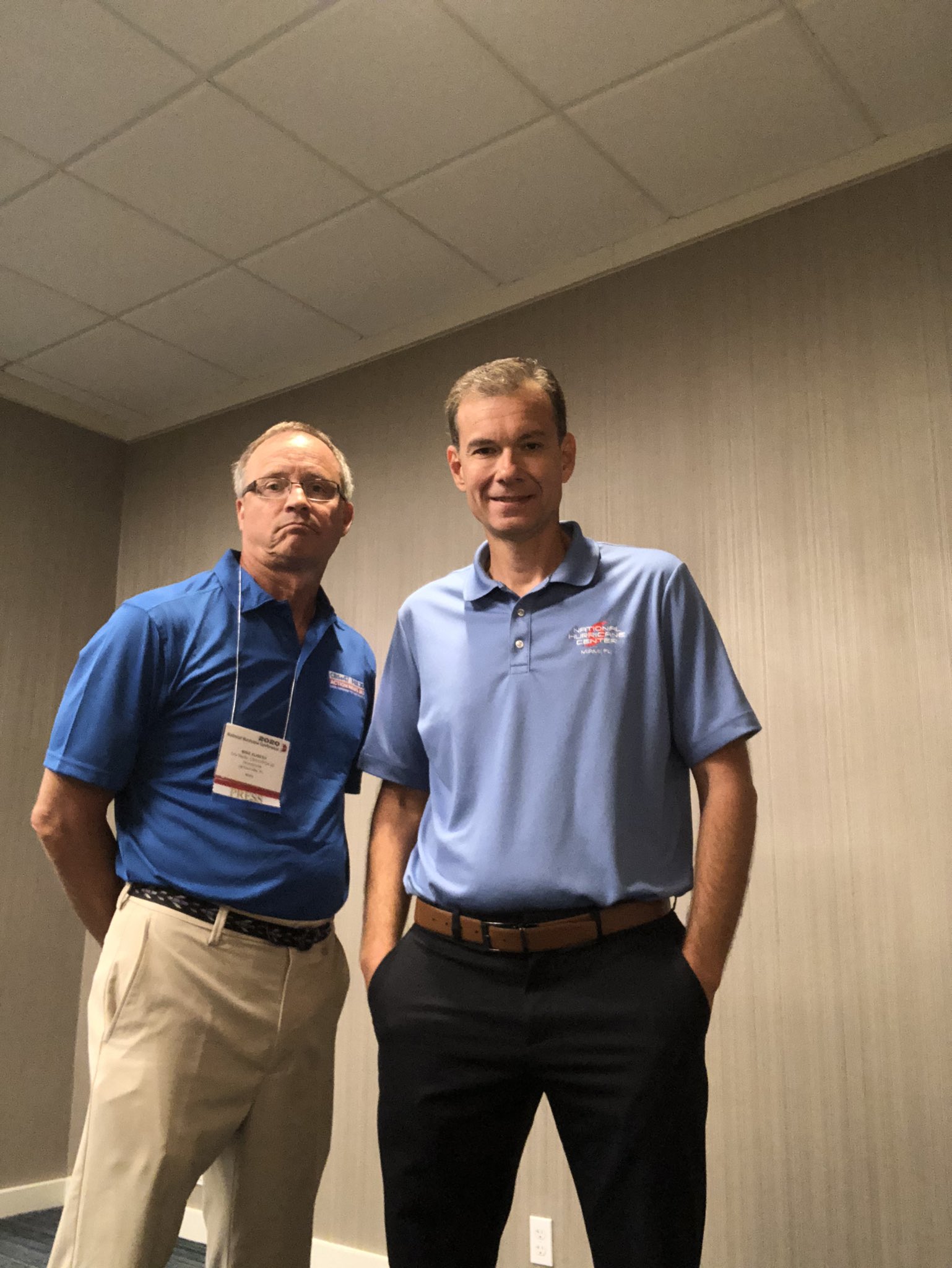 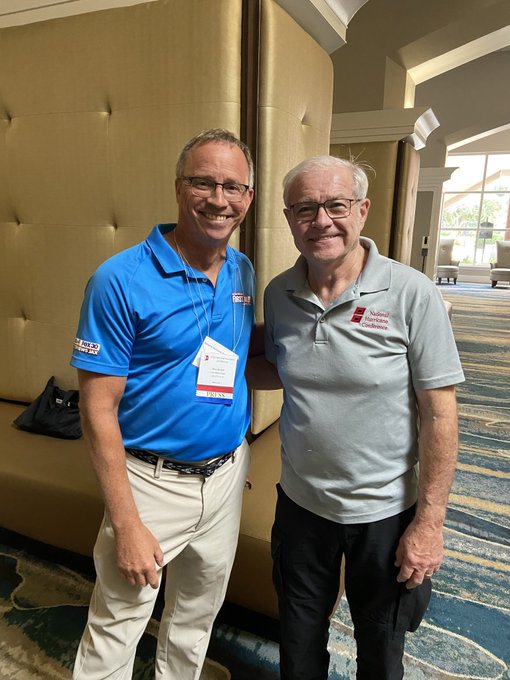