One usual suspect of summer from July through August is always the Perseids. Meteors emanate from the constellation Perseus and we see them streak across the night skies. The MOON will play a role in viewing this year, so let’s talk about how and where to see the Perseids. 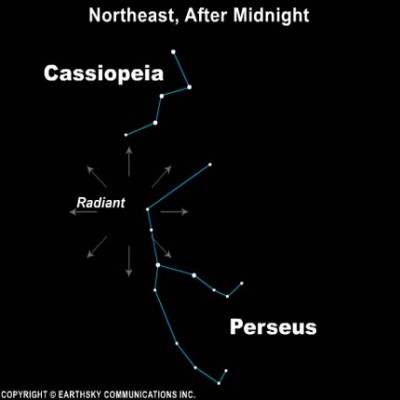 Simple as that. Look Northeast at night. The meteor shower peaks each morning of August 11-13. EarthSky says that meteor numbers typically increase after midnight, but there are some flying that will be visible before midnight. And that it can also take your eyes up to 20 minutes to adjust to the darkness. So find a spot not obstructed by city lights or light pollution, grab a lawn chair, and enjoy.

As I mentioned earlier, the moon shines a bit just in time for the Perseids. The moon is waning though - meaning it’s getting smaller and smaller working its way toward becoming a new moon (becoming invisible). It could be worse, but it will be bright. EarthSky also suggests using something like a building to block the moon out if possible. As we roll through the peak of the Perseids, moonrise time becomes later and later in the morning:

Keep in mind, the moon gets smaller as the days progress.

Working in the news business, sometimes words are used to mean things you maybe wouldn’t expect. As with any business, there are words and phases very specific to television that are used to communicate on a daily basis. Some of these phrases mean absolutely NOTHING to the common layperson. When we talk about a photographer “going out and shooting something” - that just doesn’t sound good! But it’s totally natural (that photographer is going to go record a story with his camera. That’s all it is, trust me). The word “WRAP” has a couple different meanings. It’s the word that gets yelled in my ear when I talk too long and it’s time to “WRAP IT UP COREY.” Ha. It’s also a sandwich thingy. But we aren’t talking about either of those. NEOWISE came and gave us some great back-to-work or quarantine (if you’re still stuck at home) stuff to look at and think about. Many great pictures came into the First Alert Weather Center:

I got an email from a viewer asking some questions about NEOWISE, so I had to do some research:

“Been watching the comet, it is golden, shiny & beautiful. Of course, it doesn’t look like any of the pictures people send into the station. I first see it from my back patio as soon as it is dark enough. Six hours later, 1:30-2:00 a.m. I walk out the front door about 5 feet & can see it has moved that far. Of course, I realize that is not correct, just an illusion of moving only inches. Why is this & how fast is it traveling to be back  in almost the same place 24 hours later? I’m  sure you won’t have time to answer me, but curiosity wouldn’t leave me alone until I asked. Thank you”

Here’s what I sent back:

“...we just recently discovered it existed and it basically appeared out of nowhere. We’re at just the right angle in our orbit that we can see it. But it’s speeding away - moving around 144,000 mph!! Because it’s so far away, it doesn’t appear to change position all that fast. That’s why it looks like just a mere inch or two to the human eye. As fast as it appeared, it will be gone. Comets are lit by the sun, so as it moves away from the sun, we’ll be able to see it less and less. And we’ll be rotating away from it too. NASA says it orbits the sun every 6,800 to 7,000 years - that’s how long it will be until it’s visible from Earth again.”

You can actually still see NEOWISE - and it may get in on the Perseid show during the middle of August! But it is fading as it moves away from the sun. I haven’t found a precise cut-off date, but eventually, NEOWISE will be bygones.