We seem to have a potential problem developing in the Gulf... in rather rapid fashion. Here to say right now: heads-up & don’t get caught off-guard anywhere from Texas to the Western Florida Panhandle. I’ve been tracking this wave since at least the weekend. Forecast models have trended north & are quite strong in their development of a tropical cyclone, quite possibly a hurricane. The European & GFS models are in fairly remarkable agreement - for this far out - of a landfalling named storm on the Western Gulf coast early next week - the Euro over Louisiana, the GFS near the Texas/Louisiana border. And we many not yet be done with the north & east adjustment. (The UKMET model is more west & south but trending north too).

This potential storm is tied to a tropical wave over the Caribbean where conditions are currently marginal (high shear, some dry air) for much development. By the time the wave is near the Yucatan Peninsula, conditions become more favorable other than possible land interaction. Once into the Gulf of Mexico, it appear conditions are quite ripe for strengthening with concern increasing about a *possible* landfall when the storm is nearing its peak intensity.

Again - anyone living along the Gulf Coast &/or traveling to the area should stay up to date on the latest forecasts/development every single day through early next week.

Meanwhile.... an active tropical wave continues to move west toward Florida. Satellite images nicely show the wave - combined with an upper level disturbance - producing a good amount of convection over to the east of the wave axis (typical since that’s where the best lift occurs). The wave will continue west & will cross Fl. through Thu. with some “extra” rain/storms & heavy rain but no surface development is expected. 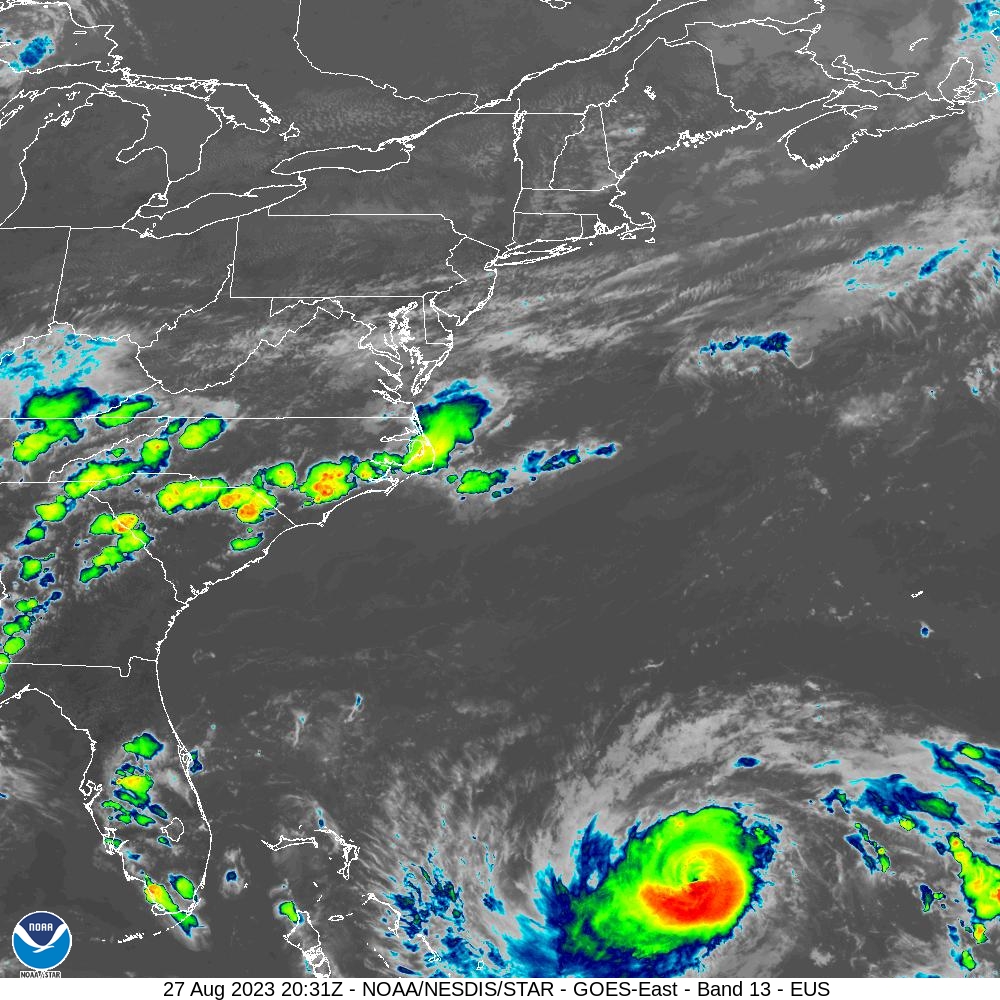 Elsewhere over the Atlantic ... a couple of strong tropical waves are over the Eastern Atlantic. While each may eventually develop into a tropical cyclone, the good news is that it appears these systems do not make it across the Atlantic staying over open water well to the east & southeast of Bermuda.

We’re now less than 3 weeks from the peak of the hurricane season (Sept. 10), so just from a climatological point, we should see an uptick in Atlantic activity. But there are also other indications to track including the MJO, seasonally warm sea surface temps. & rather impressive deep oceanic heat content.

Sea surface temps. across the Atlantic are now near to above avg. across much of the basin (2nd image below) & - even more importantly - deep oceanic heat content is becoming impressive & the “equivalent oceanic heat content” - namely depth averaged temperature in the upper 300 m (~984 feet) - is even more impressive all the way from Africa to the Gulf of Mexico. Such an ocean water temp. pattern is conducive to long track deep tropical Atlantic tropical cyclones & can lead to a more favored regime for rapid intensification cycles. From an AMS research paper in ‘08 Mainelli, DeMaria, Shay, Goni: “Results show that for a large sample of Atlantic storms, the OHC variations have a small but positive impact on the intensity forecasts. However, for intense storms, the effect of the OHC is much more significant, suggestive of its importance on rapid intensification. The OHC input improved the average intensity errors of the SHIPS forecasts by up to 5% for all cases from the category 5 storms, and up to 20% for individual storms, with the maximum improvement for the 72–96-h forecasts. The statistical results obtained indicate that the OHC only becomes important when it has values much larger than that required to support a tropical cyclone.” More recent research continues to indicate similar correlations.

Saharan dust. Dry air - yellow/orange/red/pink. Widespread dust is most common earlier in the hurricane season & is indicative of dry air that can impede the development of tropical cyclones. However, sometimes “wanna’ be” waves will just wait until they get to the other side of the plume then try to develop if everything else happens to be favorable.