Talking the Tropics With Mike: Kate forms over the Central Atlantic while Ida moves inland

* conditions will slowly improve through Mon. for coastal Louisiana & Mississippi.

Landfall: NOAA Doppler radar imagery indicates that the eye of Ida made landfall along the southeastern coast of Louisiana near Port Fourchon - about 100 miles south of New Orleans - around 1155 AM CDT (1655 UTC)/12:55pm EDT. Data from an Air Force Reserve reconnaissance aircraft and Doppler radar data indicate that Ida’s maximum sustained winds at landfall were estimated to be 150 mph (240 km/h). The latest minimum central pressure estimated from reconnaissance aircraft data is 930 mb (27.46 in). A second landfall - with winds still near 145 mph/Cat. 4 - occurred near 3:00pm EDT just SW of Galliano, La.

Ida was slow to lose “steam” Sunday afternoon & night despite landfall. Known as the “brown ocean effect”, Ida’s proximity to the very warm Gulf with the eye still very near the ocean & over inlets, bogs & estuaries likely helped “feed” Ida for some time. Coupled with still nearly ideal upper level conditions - venting [or diffluence] aloft - Ida was still a hurricane past midnight Sunday before finally being downgraded to a tropical storm - but still dangerous - Monday morning.

As feared since Wed., Ida will be a major/historical hurricane hit on the Central Gulf Coast with particular focus on Louisiana/Mississippi. The approach from the southeast nearly 100 miles south of New Orleans will likely spare the Crescent City the highest winds but there will still be major impacts on the city including A LOT of water - both fresh (rain) & salt (surge).

Ida was a tropical wave that originated off of Africa & has been steadily marching west waiting for a more favorable environment (less dust, more moist atmosphere & less shear). The system found that more favorable area & was upgraded to t.d. #9 Thu. morning then t.s. “Ida” late Thu.... & a hurricane early Fri. afternoon followed by a landfall on the Island of Youth then Western Cuba Fri. evening becoming a “major” hurricane overnight Saturday with a third & fourth landfall - & the first U.S. landfall early Sun. afternoon. Moving inland with increased friction, drier mid & upper level air + increasing shear will result in pretty fast weakening Mon., but it was too little too late to spare Louisiana & New Orleans & Mississippi one of the most severe hurricane hits on record for the local area.

A warm “eddy” over the Gulf of Mexico - similar to 2005 [Katrina & Rita] - did indeed seem to help Ida intensify Sat. night/early Sunday during a classic rapid intensification cycle (RIC). Despite fairly rapid movement - by tropical standards - Ida deepened fast within a moist atmosphere, low shear, strong upper level ventilation & warm water to develop into a major hurricane appearing to fall just short of Cat. 5 intensity (to be truly determined in post storm surveys & research). Ida was reminiscent of some of the most infamous U.S. landfalling hurricanes on record strengthening over a short period of time while approaching land: Laura, Michael, Andrew, Camille & the 1935 Labor Day hurricane to name just a few.

Double digit storm surge occurred just to the east of the eye where waves were measured at more than 40 feet! Dangerous storm surge occurred all the way east to Mobile, Al. with notable storm surge as far east as Pensacola, Fl. And since much of New Orleans is essentially a bowl, water will be very slow to recede.

Rainfall of 1-2 feet on top of saturated ground is adding to the water/flooding woes.

Once inland, very heavy rain, flooding & a few tornadoes will extend far to the north & northeast including parts of the Tennessee Valley, Lower Ohio Valley & Mid-Atlantic states for at least the next several days. Anyone near & along the future path of what’s left of Ida should not let their guard down. 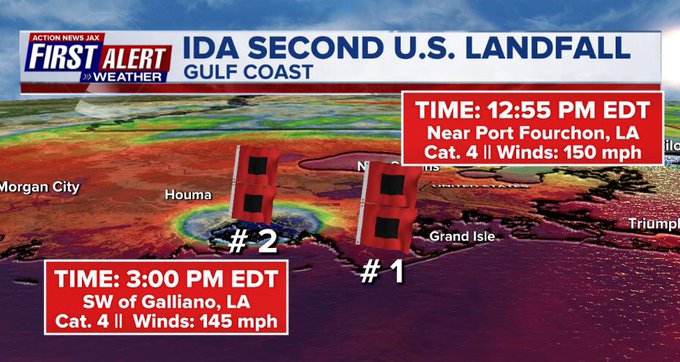 Ida’s remnants + a stalled front will combine to make for a potentially serious flash flood situation well inland - as far north as the Tennessee Valley & Ohio River as well as parts of the Mid-Atlantic: 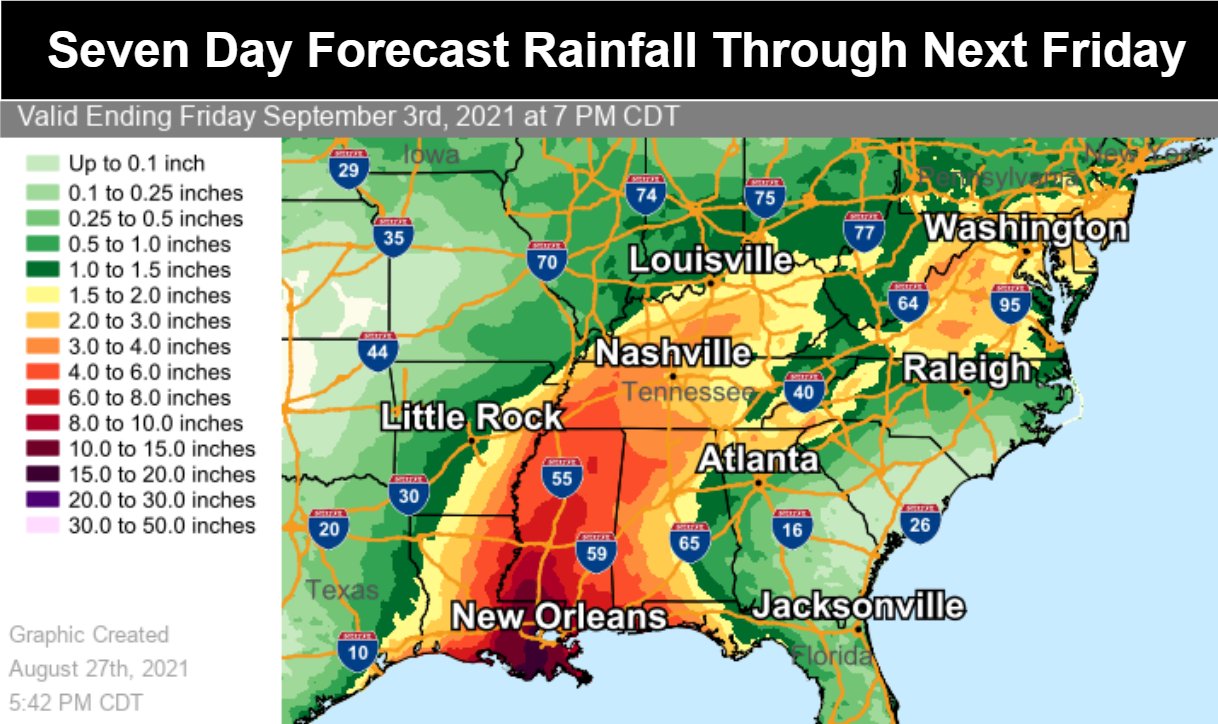 500 mb (~30,000 feet) forecast map below from Wed., 08/25 for Sunday, 08/29 shows the weakness along the Gulf Coast with a somewhat soft ridge/high pressure along the U.S. east coast while a trough of low pressure moves into the Midwest. The alleyway was a like a cork in the stream allowing Ida to steadily move northwest while turning more northward with time, especially near & after landfall. 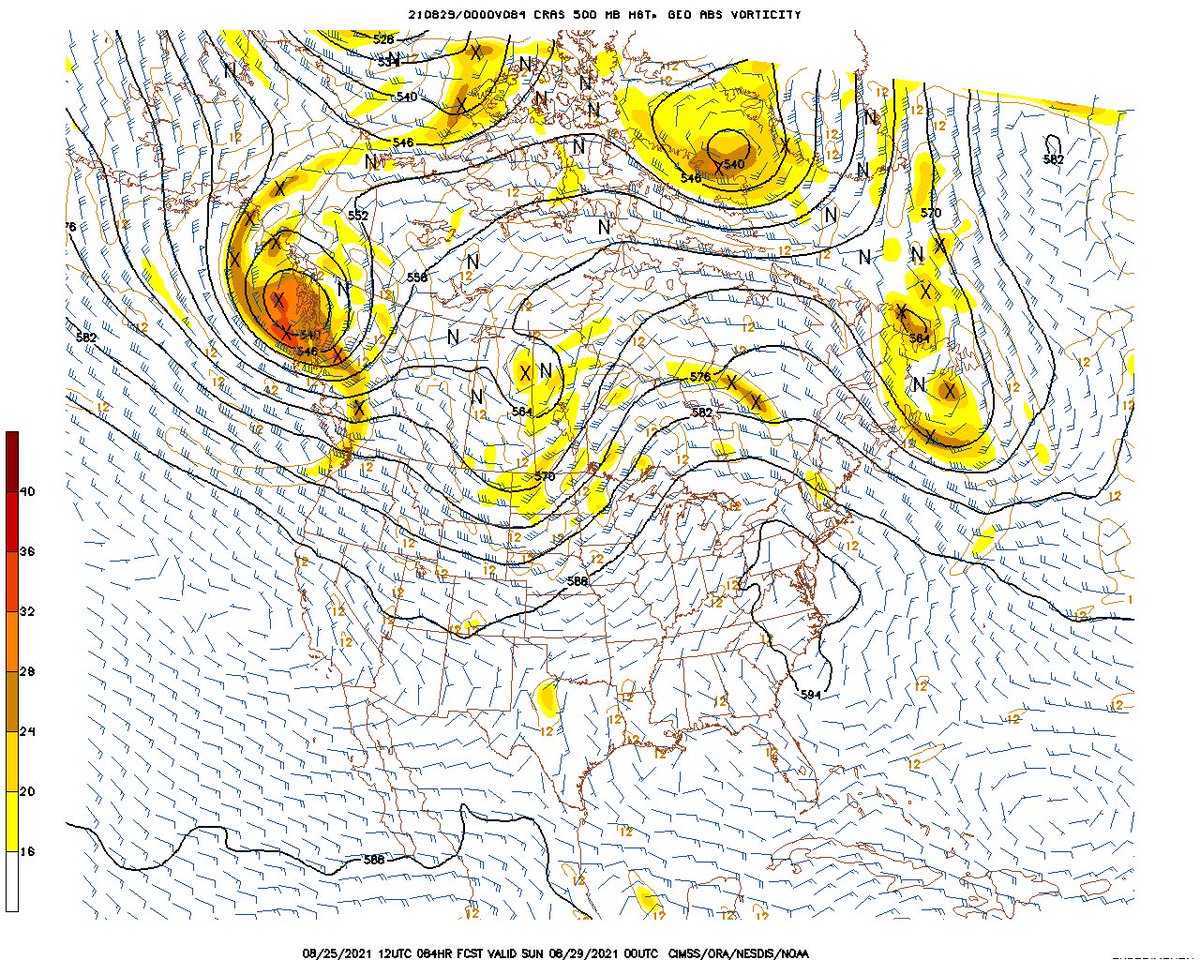 “Morphed Integrated Microwave Imagery” from CIMSS shows the change in structure & tightening of the eye of Ida:

Lots of oil rigs were affected by Ida over the Northern Gulf so expect a “bump at the pump” in the coming days depending on how things play out. 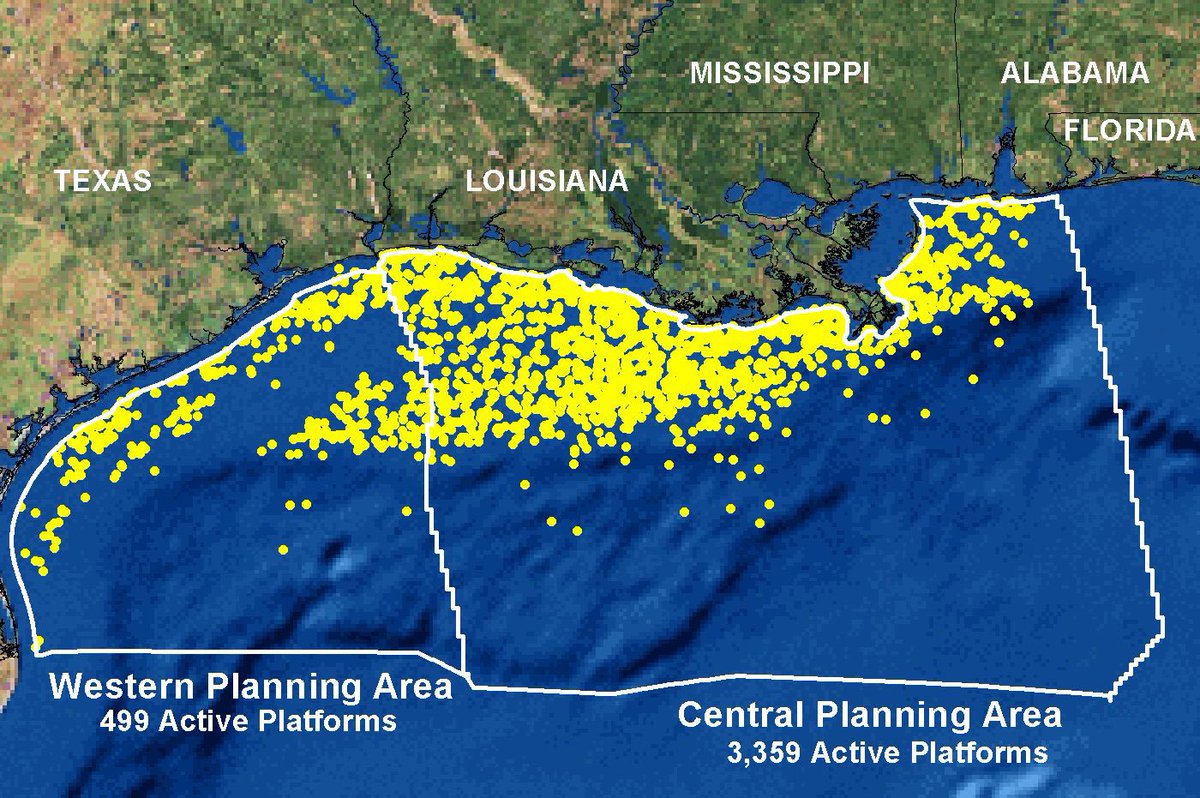 Yet another strong tropical wave is poised to move off the coast of Africa. While this one is likely to become a hurricane, it also appears that this one will turn northward relatively early which would keep the system well east of the U.S. & well northeast of the Caribbean. By the Labor Day weekend there may be an easterly swell reaching U.S. east coast beaches.

So some good news!: For right now, the Bermuda High across the Atlantic is displaced to the east & northeast - & generally weaker - into at least early Sept. - important for any potential long track tropical systems coming out of the deep tropics. If the Bermuda High stays weaker, it will be difficult for a long track tropical cyclone to make it all the way across the Atlantic... at least over the next couple of weeks or so.

However..... there are some hints of gradual tropical development over the Western Caribbean &/or Western Gulf over the next week or so evolving from an area of disorganized storminess over the Southern Caribbean (IR sat image below). This will be something to keep a close eye on with potential impacts - it would appear - for Mexico or *possibly* South Texas.

We’re now less than 2 weeks from the peak of the hurricane season (Sept. 10), so just from a climatological point, we should see an uptick in Atlantic activity. But there are also other indications to track including the MJO, seasonally warm sea surface temps. & rather impressive deep oceanic heat content.

Nora has dissipated while hugging the coast of Mexico & moving inland enough to rob the storm of the needed warm ocean “fuel”. This was an excellent forecast by the GFS model which has been a “stud” so far this season. But tropical moisture remains & eventually - from the middle through the end of the week - the moisture will stream northward bringing possible flooding to Arizona & New Mexico perhaps as far north as parts of the Rocky Mountain states: