Talking the Tropics With Mike: A quiet Atlantic Basin

For Jacksonville/NE Fl./SE Ga. peak wind gusts were generally between 30 & 50 mph along with a few tornadoes & waterspouts through the day Wed. Rainfall averaged 1-3″ but several areas had 3-6″.

What was a strong tropical wave speeding west/northwest over the Central Atlantic was upgraded to t.d. #5 late Wed. evening & tropical storm “Elsa” early Thursday & now - early Fri. - a hurricane while moving over Barbados then back to a tropical storm Sat. before briefly regaining hurricane status again Tue. evening west & southwest of Tampa with a landfall near 10am, Taylor Co., Fl. near Keaton Beach. This is the fastest ever to the 5th storm beating the old record of “Edouard” on July 6th, 2020.... the farthest east that a hurricane has formed since the infamous 1933 season... & well ahead of the avg. first Atlantic hurricane of Aug. 14th. Elsa weakened back down to a tropical storm last Sat. as the center moved just south of the coast of Haiti.

Elsa is became caught up the mid-latitude flow over the U.S. & accelerated northeast hugging the east coast bringing heavy rain & flooding along the I-95 corridor through New England through Fri.

More on local Elsa impacts in the “Buresh Blog”.

So right now - there are no areas of concern across the Atlantic Basin. There is a bit of storminess over the SW Caribbean but no surface low pressure is evident & any consequential development appears unlikely.

Dr. Phil Klotzbach, CSU updated his seasonal Atlantic Basin tropical cyclone forecast Thu. & did up the #’s a bit. Looks like a busy few months ahead. Always be prepared. 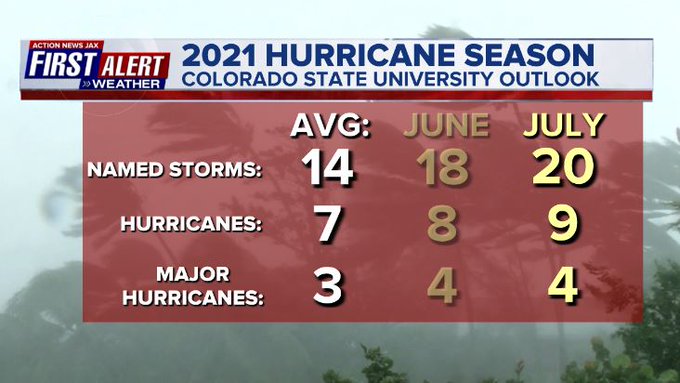 Saharan dust. Dry air - yellow/orange/red/pink - is extensive over the Central & Eastern Atlantic. Such widespread dust is common early in the hurricane season & is indicitive of dry air that can impede the development of tropical cyclones. However, sometimes “wanna’ be” waves will just wait until they get to the other side of the plume then try to develop. But nothing expected real soon over the deeper Atlantic Basin though tropical waves continue to march west off the coast of Africa.