OKLAHOMA CITY — An accused serial killer suspected of killing at least four women and girls in Texas and Oklahoma more than 20 years ago was sentenced to death Thursday for the murder of a newlywed who vanished from an Oklahoma car wash.

William Lewis Reece, 62, of Houston, was sentenced to die for the first-degree murder of Tiffany Dobry Johnston, 19, who vanished July 26, 1997, from the Sunshine Car Wash in Bethany. Reece confessed to abducting Johnston by throwing her in his horse trailer and driving away.

Reece raped and strangled her in the trailer before tossing her mostly nude body into some tall grass on a roadside, according to the Oklahoman. Her body was found the next day.

Johnston, who was married three months before her murder, was the daughter of one of his mother’s friends, the newspaper reported.

Reece made no statement in court Thursday when asked if he had anything to say before sentencing. The Oklahoman reported that he showed no emotion as Oklahoma County District Judge Susan Stallings handed down his sentence.

“There’s an old saying in the law: ‘Justice delayed is justice denied,’” Stallings said, according to the paper. “Justice will not be delayed any longer in this case. I sentence you to death.”

“He’s not sorry,” Johnston’s mother, Kathy Dobry, of Anadarko, told the paper. “He’s just a serial killer. He doesn’t care about anyone but himself.”

Dobry said she would never forgive Reece for her daughter’s murder.

“I’m sorry,” she said. “I believe in God and all that, but I will never forgive him. I’m glad people can. But not this mama.”

A trail of terror

Reece, an Oklahoma native who lived in Houston in 1997, is accused of killing Johnston and three Texas victims, Kelli Ann Cox, 20, of Denton; Jessica Lee Cain, 17, of Tiki Island; and Laura Kate Smither, 12, of Friendswood; over a four-month span in 1997. Reece had recently been released after serving more than a decade in an Oklahoma prison for rape, kidnapping and forcible oral sodomy, Oklahoma Department of Corrections records show.

An in-depth 2016 profile of Reece by the Dallas Morning News indicates that those very first convictions stem from attacks on two women, including the 19-year-old daughter of an Oklahoma sheriff’s deputy. The woman, a student at the University of Oklahoma, was abducted by Reece in April 1986 after he stopped to help with her car, which had stalled in a storm.

“Why are you doing this to me?” the young woman asked.

Reece replied that he was “crazy.”

The victim escaped after she talked Reece into letting her go to the bathroom, the Morning News reported.

A month later, while awaiting trial in that case, Reece, then 26, raped a woman he followed home from a bar, the newspaper said. He ultimately served 10 years of a 25-year sentence in those crimes.

When he was released, Reece found work shoeing horses and working construction, but his criminal behavior soon escalated. Reece has never given a motive for the killings, but prosecutors told jurors he raped the women to satisfy his sexual desires and killed them so they could not send him back to prison, the Oklahoman reported.

Dobry, who met Reece through his mother, told the Morning News the ex-convict seemed “very polite.” She even drove him to get a driver’s license as a favor to her friend.

“And dummy me, I didn’t think to ask what he’d been in jail for because it didn’t concern me and my family,” Dobry said in 2016.

Nine months after Reece walked free, he raped and murdered Dobry’s daughter. Johnston was the sixth of Reece’s seven victims.

Reece began telling Texas authorities about his alleged murder spree in 2016, after DNA linked him to the murder of Johnston nearly 400 miles away. Benedict, who asked jurors to disregard his client’s confessions, said Reece only admitted to the crimes because a Texas Ranger promised he’d be spared the death penalty.

“A promise he couldn’t keep, but still a promise,” Benedict said, according to the Oklahoman.

At the time of the 2016 confessions, Reece was serving a 60-year Texas prison sentence for the May 16, 1997, aggravated kidnapping of Sandra Sapaugh.

Sapaugh, 19, was at a payphone at a gas station in Webster when she spotted Reece staring at her. According to ABC 13 in Houston, she drove away but found that one of her tires had been slashed.

When Sapaugh stopped across the street at a Waffle House, Reece pulled in behind her and offered to help her change the flat.

Instead, he abducted her at knifepoint.

Sapaugh, who was pregnant, managed to free herself and jump from the moving truck as it raced along Interstate 45. She was badly injured but survived the ordeal.

Reece was arrested five months later but by that point, he’d allegedly killed three more women: Johnston in Oklahoma and Cox and Cain in Texas.

Cox, a criminal justice and psychology student at the University of North Texas, disappeared July 15, 1997, following a field trip to the Denton jail with her criminology class. According to the Morning News, a key Cox had hidden under her car wouldn’t open the door, so she walked to a nearby gas station and called her boyfriend for help.

She was gone by the time her boyfriend arrived, and she was never heard from again. Cox’s parents were left to raise her 19-month-old daughter, Alexis.

Cain vanished Aug. 17, 1997, after a cast party for a musical she’d been in at her Catholic prep school. According to her obituary, Cain had hoped to study drama at Sam Houston State University.

The Houston Chronicle reported that Cain’s father’s truck, which she had borrowed, was found along her route home from the Clear Lake restaurant where the party was held. Her purse was still inside.

Harris County court records show that Reece’s arrest and conviction in the Sapaugh case led authorities to suspect him in the disappearance and murder of Smither, an aspiring ballerina abducted April 3, 1997, while taking a 20-minute morning jog near her home.

The girl’s father and stepmother reported her missing after she failed to come home for breakfast. 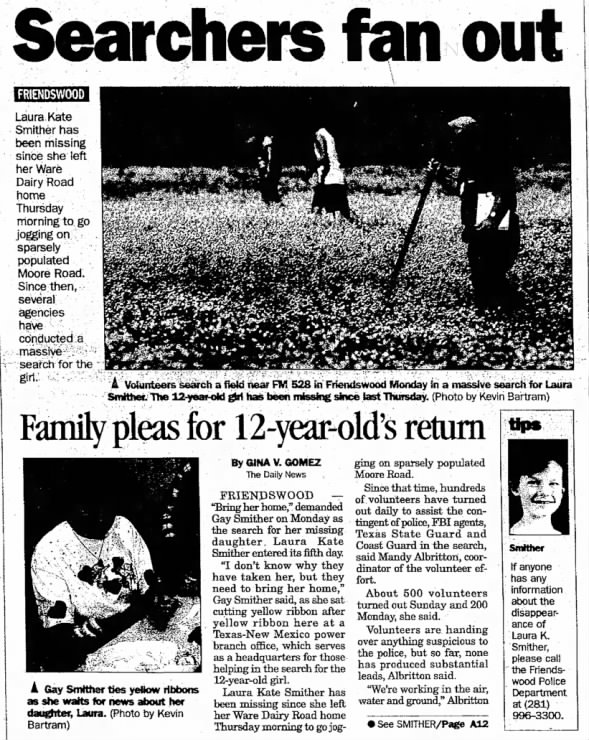 Smither’s nude, decapitated body was found 18 days later in a retention pond 12 miles from her home, the Galveston Daily News reported in 1997.

It would take nearly two decades — and Reece’s help — for his other two known victims to be found.

“I don’t want to call him clever, but you know, he was definitely calculating,” Friendswood police Chief Robert Wieners told ABC 13 this week. “He really kind of thought he was smarter than everybody else.”

Wieners said Reece was housed in the Friendswood city jail for several months in 2016, as law enforcement tried to find the bodies of Cox and Cain. According to the news station, Reece had told a Texas Ranger he could lead investigators to Cox’s remains.

“We brought Reece out there, you know, (and) had him demonstrate to us how he buried the bodies,” the chief said.

Cox’s remains could not immediately be found. Reece, who was confessing to the Texas crimes to avoid the death penalty in Oklahoma, then took authorities to a site in southeast Houston where he said he’d buried Cain. 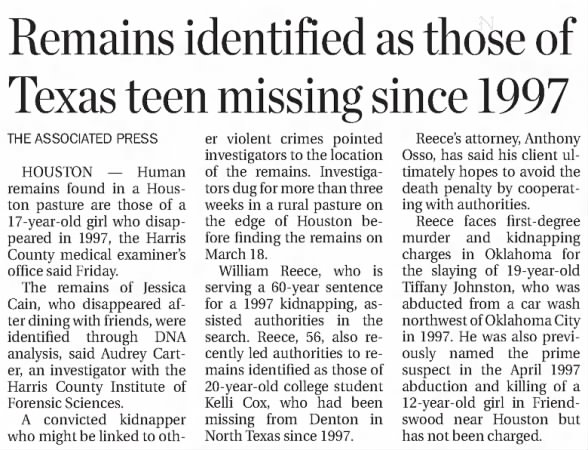 The second site caused some confusion, as well.

“He kept saying, ‘I can guarantee you she’s right here,’ and I said, ‘Bill, we’ve already dug right there,’” said Josh Rogers, deputy chief of the Friendswood Police Department. “He kind of cussed and said, ‘You’re wasting everyone’s time out here.”

Investigators realized that the field to which Reece led them had changed over the years. It now included a fence that had been installed since Cain’s disappearance.

When the fence was removed, they found Cain’s remains.

The Oklahoman reported that in his confessions, Reece alleged that he’d accidentally hit Smither with his truck as he left the Friendswood construction site where he was working at the time. He said he then panicked and snapped her neck before disposing of her body.

“I’m sorry about it. I wish I had done something different,” he said in his confession.

Reece told authorities he’d come across Cox at a “mom-and-pop” grocery store while on a drive from Oklahoma to Texas. He said he stopped for whiskey and bumped into the college student, with whom he began to argue.

He said he strangled her to death and put her in his truck. After driving around for hours, he said he buried the young mother’s body where it was later found near Rosharon. 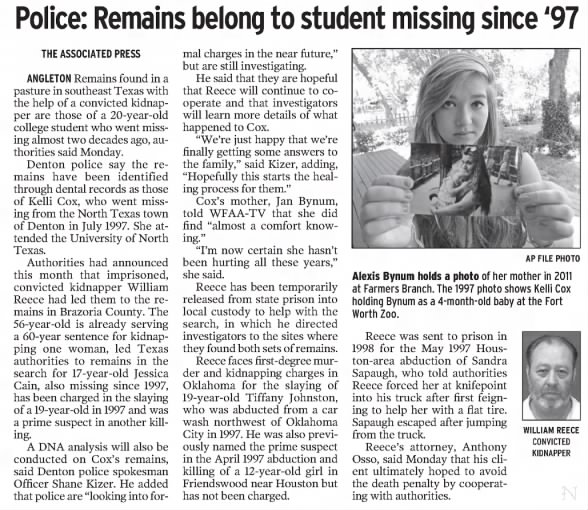 In Cain’s case, Reece alleged that he got into an argument with the teen after she hit his Jeep with a car door outside the restaurant where she was last seen alive. He said they left the lot separately but got into a second confrontation on the interstate.

He said he choked her on the side of the interstate before loading her body into his vehicle and burying her in a field.

“Are there any more out there?” a Texas Ranger asked in the recorded confessions.

“No more. This is it,” Reece said, according to the Oklahoman.

Johnston was the only victim of the four who Reece admitted to raping. By the time Cox and Cain were found, their remains were too degraded to show if they had been sexually assaulted.

Laura Smither’s mother, Gay Smither, was in Oklahoma for Reece’s trial. She told KPRC in Houston that she was pleased with the guilty verdict and sentence.

“If we don’t have our day in court in Galveston, we can live with it because he’s at least held accountable here,” Smither told the news station. “The most important thing is we know now for sure there is absolutely no way this man will ever get out. There was always that outside chance he would earn parole in the Sandra Sapaugh case, but now we know for sure he will forever be in jail. He will die in jail.”

Smither said the verdict was a victory not only for Johnston and her family but for all of Reece’s alleged victims.