Talking the Tropics With Mike: A Review of the 2021 Atlantic Hurricane Season

The 2021 hurricane season was forecast to be active... & it was. But the front half of the season stole all the headlines with a rather “soft” last half of the season. The Gulf of Mexico remained - for the 2nd year in a row - a “hot spot”. Impacts for the U.S. east coast were mainly from storms exiting to the east with the exception of tropical storm “Henri” which hit Southern New England from the east/southeast & relatively weak “Danny” on the southeast coast of S. Carolina. “Ida” was the most impactful U.S. tropical cyclone hitting Louisiana as a strengthening Cat. 4 with severe damage to parishes south & west of New Orleans. Ida produced flash flooding & heavy damage all the way northeast across the Tennessee Valley, Mid Atlantic & Northeast states with catastrophic flooding in & around New York City.

The most noteworthy storm of the season for Jacksonville/NE Fl./SE Ga. was tropical storm “Elsa” which moved north/northeast once making landfall near the Big Bend of Florida. Heavy rain to the east of the storm dropped nearly half a foot of rain along with a few tornadoes including Duval Co. with a second one in Southeast Ga.

As for the seasonal forecast, projections were fairly close to reality - see the 2nd image below. While there were 8 U.S. landfalls, only two of the storms were hurricanes - powerful Ida & a much weaker Cat. 1 hurricane Nicholas along the Southeast Texas coast. Of the 21 named storms, 8 had a “life span” of less than 48 hours. 11 of the named storms occurred before Sept. 1 leaving only 10 for the last 3 months of the season including the climatologically peak of the season - September. Of those 10, nine did form in Sept. leaving just “Wanda” for late Oct./early Nov. Only minor tropical storm “Mindy” & Cat. 1 hurricane Nicholas made a U.S. landfall in Sept. with no U.S. landfalling storm in Oct. or Nov. 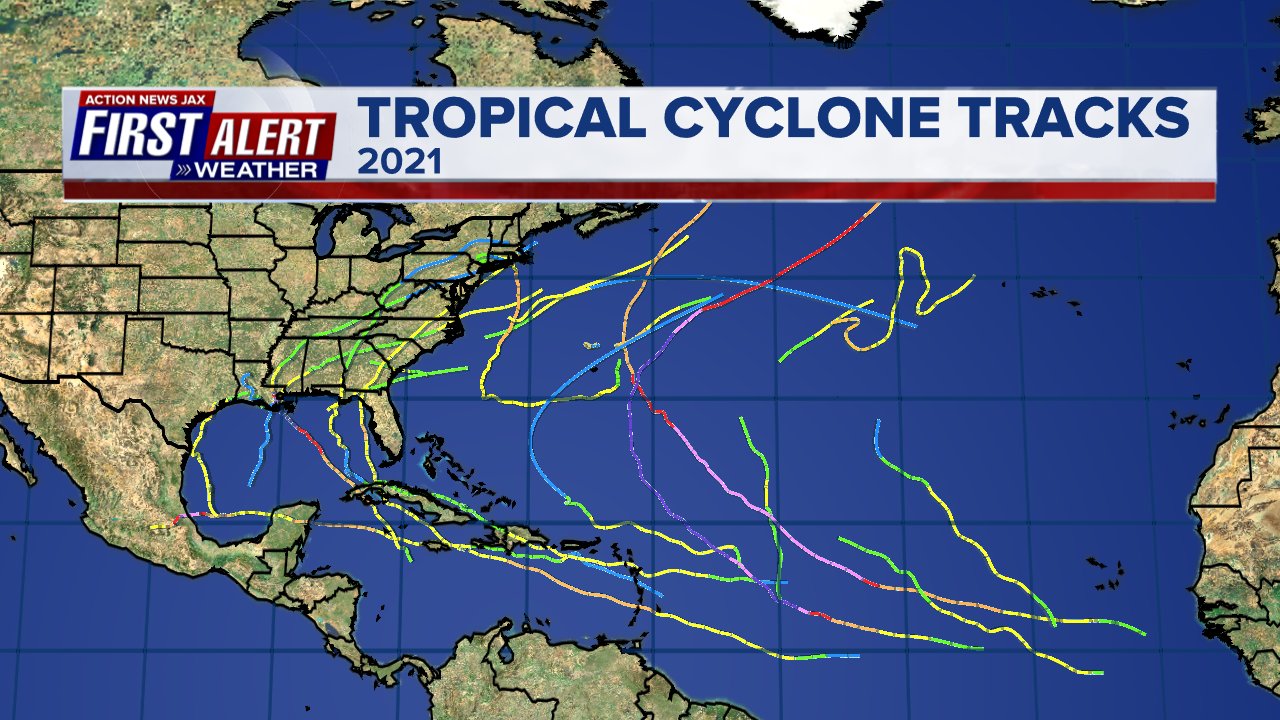 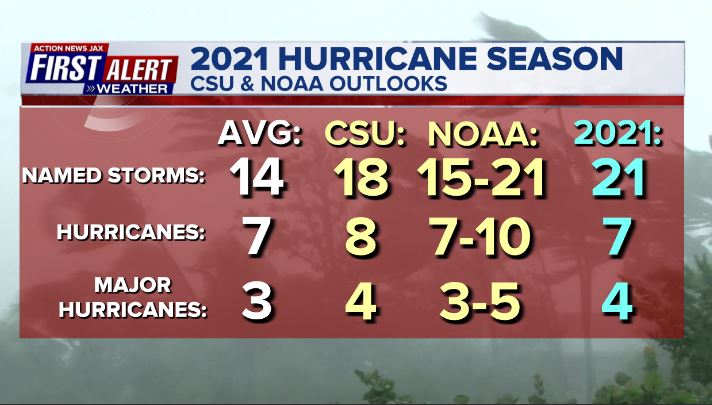 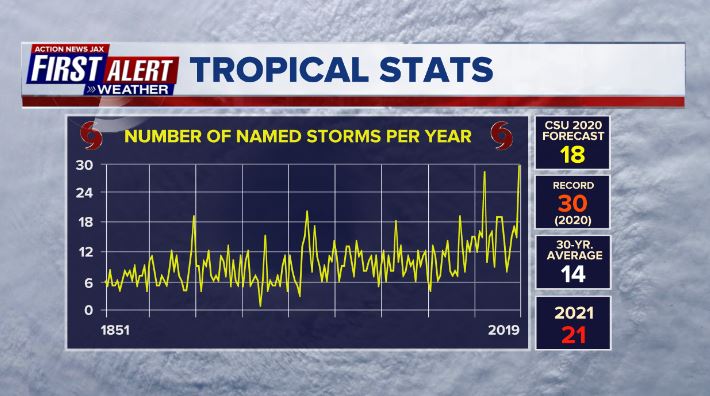 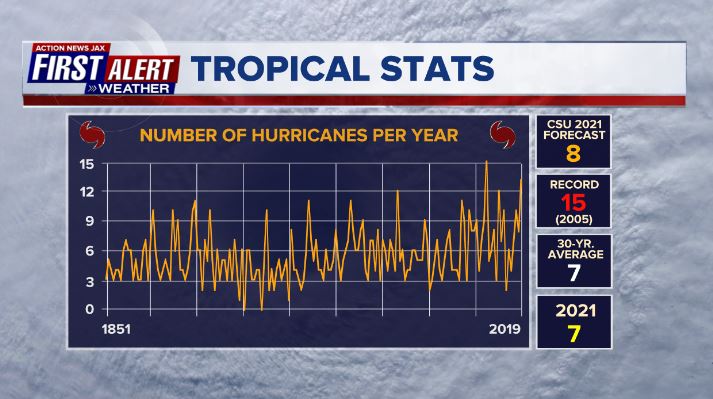 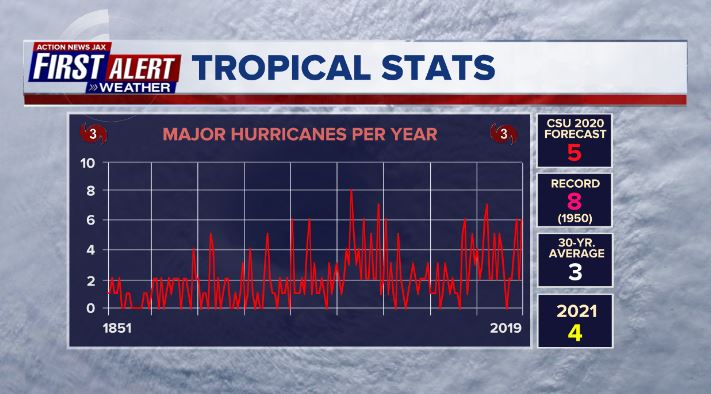 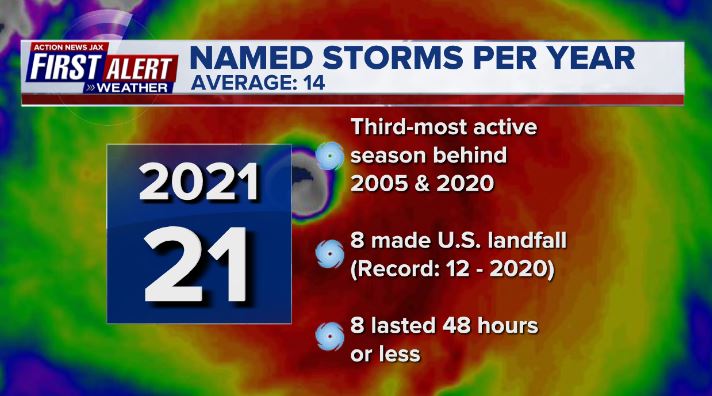 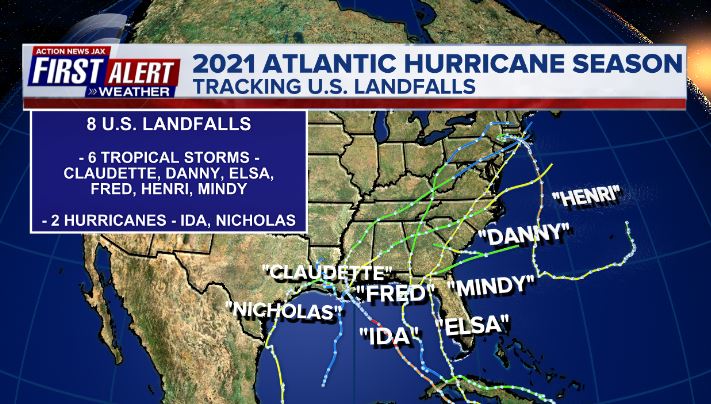 An early season storm kickoff the hurricane season as subtropical storm “Ana” briefly formed over the Central Atlantic northeast of Bermuda on the 22nd... briefly becoming tropical on the 23rd before dissipating that evening.

Tropical storm “Bill” formed on the 14th over the NW Atlantic dissipating just one day later.

On the 19th - a tropical disturbance moving N/NE from the Central Gulf of Mexico made landfall on the south coast of Louisiana & was upgraded to tropical storm “Claudette” early in the morning *after* making landfall & while moving northeast near New Orleans. The last advisory was issued on the 21st after Claudette exited off the coast of N. Carolina & SE Virginia.

28th - Tropical depression #4 formed & became tropical storm “Danny” then made landfall north of Hilton Head, SC - all in the same day! The last advisory was issued the next day.

1st: t.d. # 5 strengthens into tropical storm “Elsa” over the Central Atlantic. This was the fastest on record to the 5th tropical storm over the Atlantic Basin. The next day Elsa briefly became a hurricane while moving over Barbados/Lesser Antilles & was the farthest east a hurricane has formed so early in the season since 1933. Elsa then became a tropical storm again before hitting Central Cuba on the 5th. The next day - on the 6th - Elsa again briefly became a hurricane over the far Eastern Gulf of Mexico west & southwest of Tampa. And one day later - on the 7th - Elsa made landfall on the coast of the Fl. Big Bend, Taylor County.

Elsa is the storm that will be remembered from the ‘21 season locally in Jacksonville/NE Fl./SE Ga. With a path to the west & northwest of the area, heavy rain & tornadoes were the main threats. 2-5″ of rain fell across much of the area with two notable EF-1 tornadoes tracked street by street by the First Alert Weather Team. A full account of the day is posted in the “Buresh Blog” * here *.

Elsa was born from an unseasonably early African tropical wave over the Eastern Atlantic with the last NHC advisory on the 9th when Elsa became post-tropical near Boston: 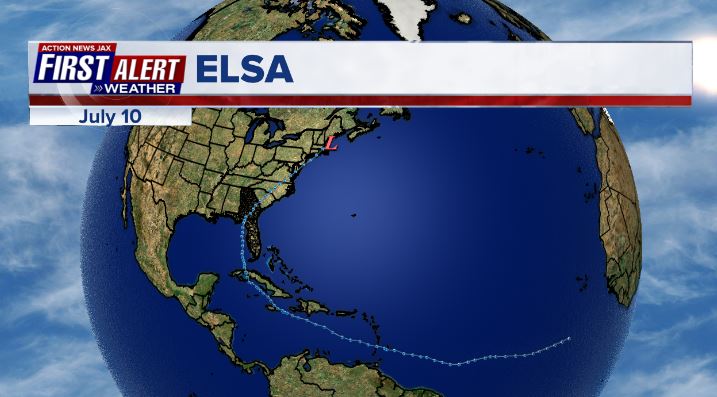 First Alert GR2 Storm Analyst with a classic “debris ball” where the tornado is on the ground near I-95 & University Blvd (left: reflectivity [rain], right: CC/correlation coefficient [debris]:

The GFS forecast model was excellent on forecasting Elsa’s track while the European model had a very rough go of it to say the least. The official NHC forecast was outstanding as well.

After a relatively long break - from July 10 to Aug. 9 - tropical storm “Fred” formed on the 10th south of Puerto Rico. Fred made landfall on the coast of Hispaniola on the 11th & weakened to a tropical depression but then became a tropical storm again on the 15th over the Gulf before making landfall in the Florida Panhandle on the 16th 20 miles southeast of Panama City. The final NHC advisory was issued the next day with the remnants near Atlanta.

13th - T.D. #7 forms east of the Lesser Antilles & becomes “Grace” the next day. After weakening for a couple of days, Grace became a tropical storm again on the 17th while moving west across the Caribbean with a landfall as a strengthening Cat. 3 hurricane early on the 21st near Tecolutla, Mexico well south of Brownsville, Tx. The last advisory was issued in the evening over Mexico.

15th - T.D. #8 forms south of Bermuda & becomes tropical storm “Henri” the next day. Henri made landfall as a tropical storm the following week on the 22nd near Westerly, Rhode Island. The last NHC advisory was issued on the 23rd while the post-tropical system was still over New England.

26th - T.D. #9 forms over the Northwest Caribbean & becomes tropical storm “Ida” the same day making a landfall the next day as a Cat. 1 hurricane over Western Cuba. Ida turned more northwest & rapidly intensified on the 28th & 29th with a Cat. 4 landfall on the southeast coast of Louisiana. Damages was severe across a good part of Louisiana with extreme damage across the parishes south & southwest of New Orleans where nearly 100% of power was out for at least 24 hours. Ida continued northeast producing flash flooding all along its track reaching the Northeast U.S. on Sept. 1st-2nd when catastrophic flooding hit New York City & surrounding areas resulting in at least 40 deaths. A full recap of Ida is posted in the “Buresh Blog” * here *.... & a summary * here * of similar tropical systems in the past that have caused intense flash flooding well inland. 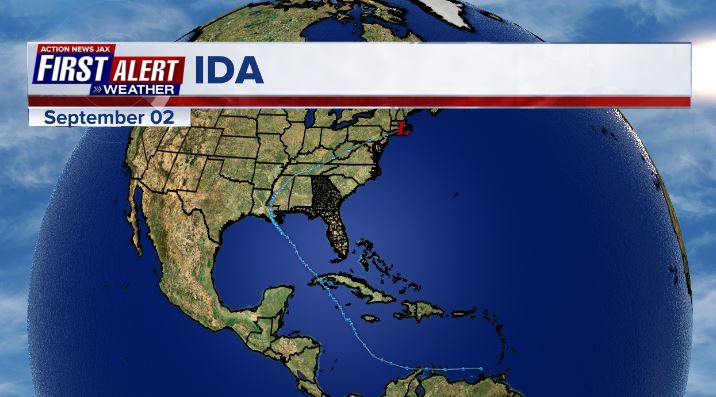 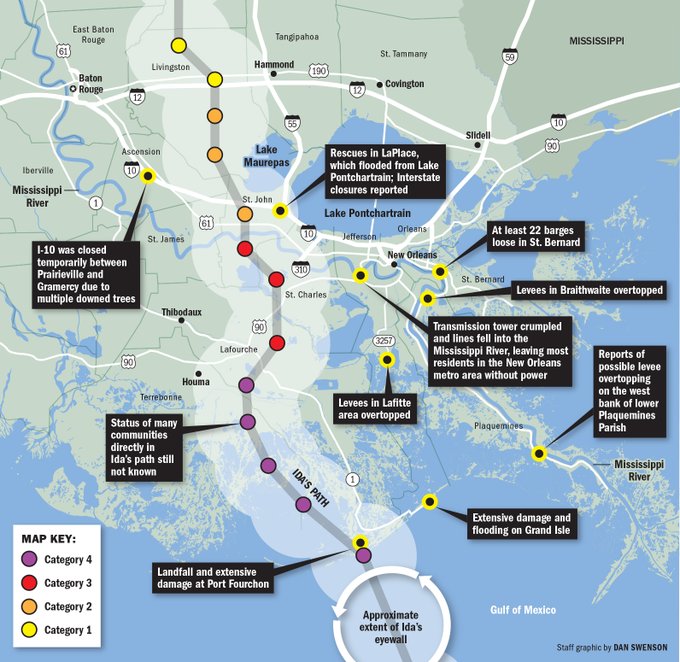 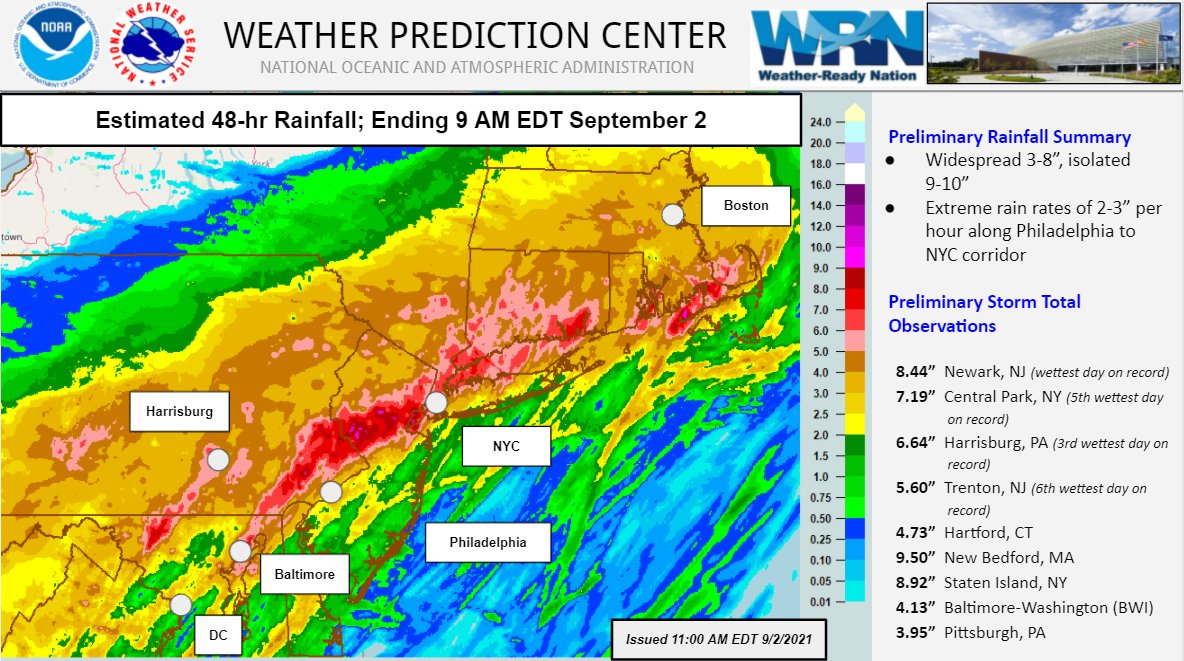 28th - T.D. #10 forms over the Central Atlantic becoming tropical storm “Kate” on the 30th then dissipating on Sept. 1st.

28th - T.D. #11 forms over the Central Atlantic & briefly strengthens into tropical storm “Julian” on the 29th before becoming post-tropical on the same day.

31st - T.D. #12 forms off the African coast over the far E. Atlantic... strengthening into t.s. “Larry” on Sept. 1st... becoming a hurricane on the 2nd... a Cat. 3 over the E. Atlantic on the 3rd... then moved steadily northwest then north for a week before a Cat. 1 landfall on the coast of Newfoundland on the 10th. The last NHC advisory was issued on the 11th.

8th - Tropical storm “Mindy” forms over the NE Gulf of Mexico with a 9:15pm landfall close to Mexico Beach in the Central Fl. Panhandle. The last NHC advisory was issued on the 9th over the W. Atlantic. The system passed north of Jacksonville early in the morning on the 9th with only minor impacts across NE Fl. & SE Ga.

12th - Tropics storm “Nicholas” forms over the Western Gulf of Mexico becoming a Cat. 1 hurricane near the Texas coast the next day... & a landfall early on the 14th as a Cat. 1 on the Matagorda Peninsula southwest of Houston with the last advisory issued on the 14th near the Texas/Louisiana border.

17th - Tropical storm “Odette” forms over the W. Atlantic & dissipates the next day.

22nd - T.D. #18 forms over the E. Atlantic & strengthens into tropical storm “Sam” the next day... then a hurricane on the 24th. The long-lasting & strong hurricane remained over the open Atlantic while curving north then northeast before finally becoming post-tropical on Oct. 5th. View of “Sam” for the International Space Station: 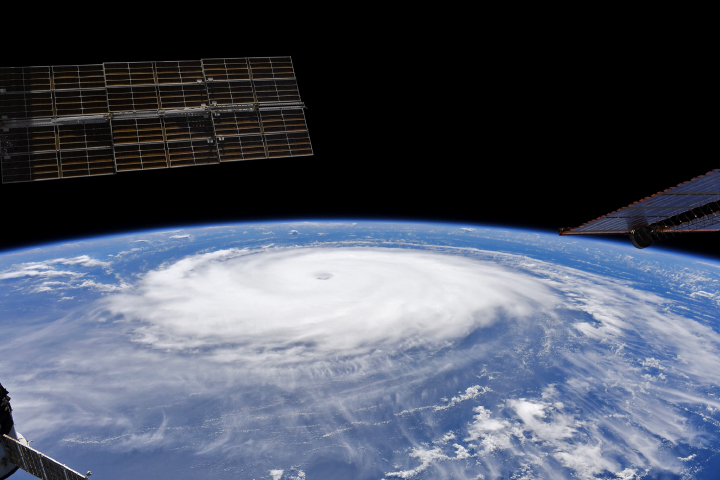 24th - Subtropical storm “Teresa” develops over the N. Atlantic north of Bermuda. The last NHC advisory was issued the next day.

29th - T.D. #20 forms over the E. Atlantic & becomes tropical storm “Victor”. The last advisory was issued on Oct. 4th over the Central Atlantic.

NO new named storms developed during the last “official” month of the Atlantic hurricane season. The last Nov. with no Atlantic tropical cyclones was in 2018.

From Dr. Phil Klotzbach: “The globe has had no major (Category 3+, max winds >=111 mph) hurricane/typhoon/cyclone formations since September 25. All other hurricane seasons in the satellite era (since 1966) have had at least two global major hurricane formations between September 26 - November 19.”